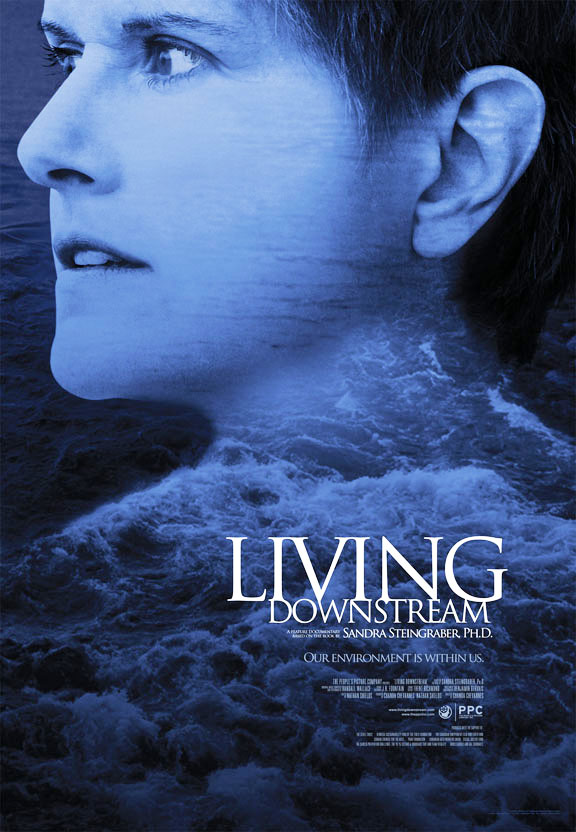 Tomorrow, October 20, at 2 p.m., Living Downstream, the film based on Sandra Steingraber’s stunning book of the same name–will show at Lincoln Center’s Elinor Bunin Monroe Film Center in New York City. It will have its broadcast premiere in November on Outside Television.

Living Downstream follows in the tradition of Rachel Carson’s groundbreaking Silent Spring. Indeed, Steingraber has been dubbed by many as a modern-day “Rachel Carson.”

First published in 1997, Living Downstream fell into my hands about 10 years ago, only a few years after my own cancer diagnosis and loss of both parents to cancer. At that time I suspected that the cancer in my life and all around me had something to do with our poisoned environment. Steingraber’s book answered my questions about the connections between pollution and cancer and opened up a new world of understanding.

Living Downstream ultimately led me down a new path both personally and professionally, inspiring my transformation from an English professor specializing in British 18th century literature to an ecofeminist writer, activist and professor.

Now I teach Steingraber’s work every semester in my college courses. Not only is the research groundbreaking and impeccable, but her beautiful prose makes otherwise tedious data accessible to lay people. By bringing personal story of cancer into the mix, Steingraber turns scientific facts about pollution and disease into something everyone can relate to.

Recently, I spoke to Steingraber and I asked her what she most wanted to accomplish in the film and book.

She said she wanted to achieve two things.

First, “I wanted to tell the story of  how chemical pollutants are playing an under-represented role in the story of cancer.”

Second, “I wanted to show how the ‘happy’ story of even a long-term cancer survivor like me is not necessarily a story of triumphalism.  Cancer is not a gift. It’s a massive waste of time. It triggers post-traumatic stress syndrome.”

In Living Downstream, the book, Sandra goes back and forth between scientific data linking toxins to cancer and her own personal cancer story. The film focuses mainly on the personal, so for those less interested in scientific data it’s a bit easier to absorb. The film is visually beautiful, too, taking the viewer into the daily life of the biologist and cancer survivor. We see where Steingraber grew up in Illinois, we see her in her home in upstate New York, we see her cooking and eating with her family, putting her children on the school bus, talking to her husband and running.  t’s an intimate portrayal.

One of the most dramatic moments in the film takes place when Steingraber makes her regular visit to the urologist’s office for the dreaded “check-up.” This scene was not in the original version of Steingraber’s book. In the book, after several chapters of scientific information, Steingraber shifts to a description of the moment she was diagnosed with bladder cancer at age 20 in her doctor’s office.

Chanda Chevannes, the filmmaker, and Steingraber wanted to replicate this traumatic moment  in the film, but instead they filmed Steingraber’s visit to a urologist’s office in the present–33 years after the original diagnosis.

In the scene, Steingraber undergoes a cytoscopic test. As audience members, we witness firsthand the fear and anxiety of the cancer patient–that feeling Steingraber describes as, “standing on the edge of a cliff, looking down into the abyss.” She adds:

Certain scenes in the film and my life, like the sound of cystoscopic instruments being pieced together and laid in a tray and the sounds of the KY jelly being  squirted out into an ultrasound– these are traumatic triggers [that bring back the initial diagnosis). … You never stop being a cancer patient.

I have shown Living Downstream to my college classes, and when the lights come up at the end of the film there is the inevitable question:
“Why?”

“Why,” students rightly ask, “are we producing such dangerous chemicals and poisoning our environment and bodies, and why isn’t the government doing something to protect us? If Rachel Carson made the point in 1962 that DDT causes cancer, why do we still produce thousands of such chemicals that end up in our food, water, toys, body products, clothing, furniture and building materials–and, inevitably, in our bodies–all these years later?”

These are the hard questions that Steingraber forces us to ask and face.

Today, Steingraber has become a leader against hydraulic fracking in her home state of New York. She joins Josh Fox, filmmaker of Gasland, actor and activist Mark Ruffalo, Sean Lennon and Yoko Ono, among thousands of others who aren’t so famous. Says Steingraber,

Fighting for the environment is our most urgent civil rights and justice issue today. Environmental rights are in the order of the women’s right to vote in the early 20th century, the abolitionist movement in the 19th or the civil rights movement in the mid-20th. I like to believe that if I had been alive (and an adult) during those time periods, I would have fought for those causes as well.

Steingraber recently gave away the Heinz Award of $100,000 she’d received to anti-fracking groups, and spends all of her non-parenting time stumping for the cause. She gave away the money despite not having enough income to put aside for her own children’s college saving accounts.

“My children’s college savings account,” Steingraber says, is a  “safe and healthy earth. We’re walking with targets on our backs right now in my little village in upstate New York as the fracking trucks roll through in preparation to start the drilling.”

Steingraber says she can’t be a HEPA filter to protect her children and keep the poisons out of their home and bodies.

Perhaps not, but Steingraber can act with her pen, her heart and her voice.  And she does.

Crossposted from Ecofeminist and Mothering Ruminations

Dr. Heidi Hutner is an ecofeminist writer, filmmaker, and professor at Stony Brook University. To learn more about Heidi’s writing and film projects, go to: Accidents Can Happen: The Women of Three Mile Island, find her on Twitter @HeidiHutner or head to heidihutner.com.