How Doula Care Could Save Medicaid Millions - Ms. Magazine
Skip to content

A new report released Tuesday reveals the immense benefits of doula care for women and babies—and the economy.

Making the case for private insurance and Medicaid coverage for doula care, the report‘s authors argue that the use of a doula reduces the likelihood of interventions, such as cesarean sections, which could save Medicaid at least $646 million per year, and private insurers around $1.73 billion annually.

Today, 1 in 3 U.S. births is by C-section, which is 56 percent more than in 1996. And cesarean births cost 50 percent more than vaginal births. The groups that produced the report, Choices in Childbirth and Childbirth Connection, argue that as the use of interventions decreases, so will associated costs, making coverage of doula care a cost-effective strategy for public and private insurers alike.

“Overwhelming evidence shows that giving women access to doula care improves their health, their infants’ health, and their satisfaction with and experience of care,” said Michele Giordano, executive director of Choices in Childbirth, in a statement. “Women of color and low-income women stand to benefit even more from access to doula care because they are at increased risk for poor maternal and infant outcomes.”

Doulas are trained professionals who provide non-clinical emotional, physical and informational support before, during and after childbirth. Despite the many positive effects of working with a doula, however, just 6 percent of American women who gave birth between 2011 and 2012 used one. To increase that number, the report suggest that Congress designate doula services as a mandated Medicaid benefit for pregnant women.

Doula care is currently paid for entirely out of pocket by most families, and at a cost of between $500 and $3,500, doula services are out of reach for most women (though some states offer Medicaid reimbursements for doula care).

Said Debra L. Ness, president of the National Partnership for Women and Families, in a statement,

Doula care is exactly the kind of value-based, patient-centered care we need to support as we transform our health care system into one that delivers better care and better outcomes at lower cost. By expanding coverage for doula care, decision-makers at all levels and across sectors—federal and state, public and private—have an opportunity to improve maternal and infant health while reducing health care costs.

Lily Wujek is currently a student at Bennington College and an editorial intern at Ms. 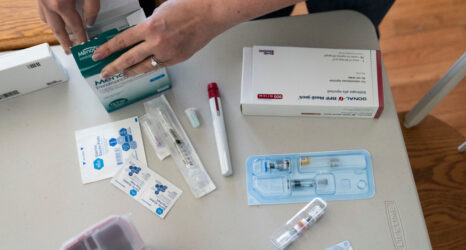 The Overturn of Roe Could Mean the End of Fertility Medicine