To call Jennifer Baumgardner a powerhouse is an understatement. The feminist author, activist and lecturer has devoted her career to the movement—and throughout, leveraged the power of media, and particularly the written word, to amplify it.

Baumgardner is the co-founder of Soapbox, Inc., a speakers’ bureau, and the co-creator of Feminist Camp, its incredible immersive activism and advocacy program. She produced the award-winning documentary I Had an Abortion and produced and directed the documentary It Was Rape. She is a five-year former editor of Ms. whose work has also appeared in publications like Harper’s, The Nation, NPR, Glamour, Teen Vogue, Marie Claire and Elle. She has spoken at over 300 conferences, campuses and other events and published six books—including the legendary Manifesta: Young Women, Feminism and the Future and Grassroots: A Field Guide for Feminist Activism.

And now, in addition to serving as editor-in-chief of the the Women’s Review of Books, the former executive editor of the Feminist Press has launched Dottir, an independent feminist press seeking to fill gaps in the literary world for readers of all ages.

Ms. caught up with Baumgardner to talk about how literature and feminism both shaped her life, why print isn’t dead and what she’s reading in the age of Trump. 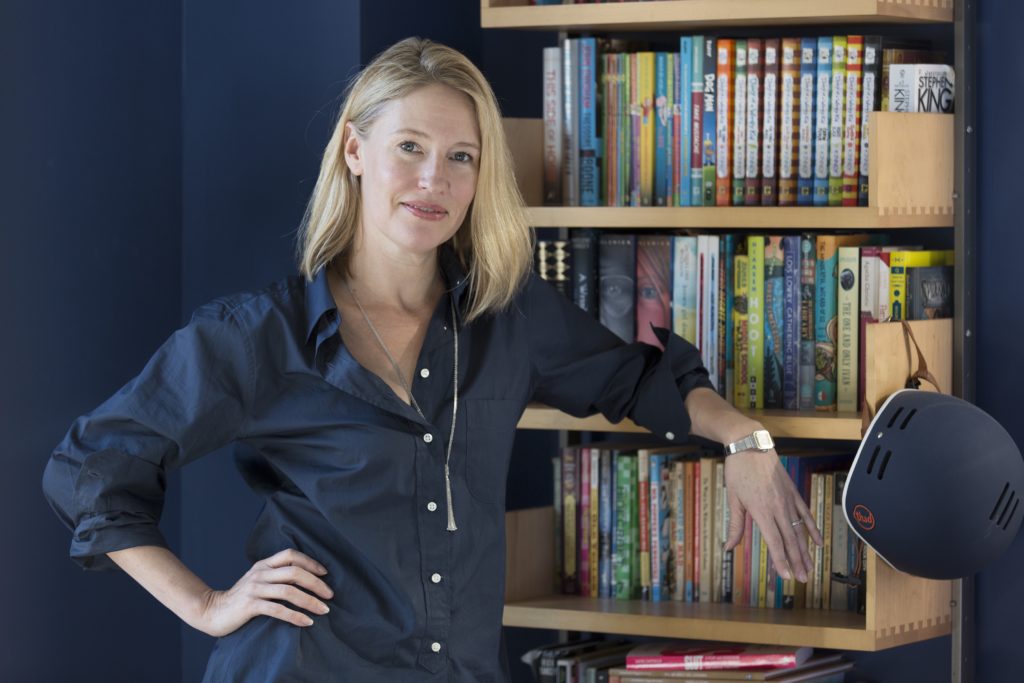 It always starts with an inception story, so here we go! You’ve worked extensively in literary and feminist sectors—and often at the intersections of both. What drove you to finally launch Dottir, and why did you decide to do it now?

When I look back on my career, there is definitely a trajectory, but it wasn’t one I planned exactly. I just kept saying yes to opportunities—like my internship at Ms. in 1993—or taking initiative to make opportunities, such as starting the I Had an Abortion t-shirt and film project in 2004 or applying to be the head of the Feminist Press in 2013. As the years went on, I wrote dozens of magazine articles, six books, taught writing at the New School, spoke at hundreds of colleges, made two documentaries, co-created a business (with Amy Richards), and helped produce plays. At the beginning of each job, book, or project, I would be aware that I didn’t know what I was doing, but that I was interested in learning. I believed in myself—that I had special skills or insights that might make the endeavor a success.

Starting Dottir was like that. I left Feminist Press in June 2017. The FP job had a steep learning curve, but I learned through it that I liked the back-end of the publishing business. I still love to write, but it’s gratifying to see the bigger picture of publishing.

In a notebook—I always carry a notebook—I had a list of ten or so things I kind of wanted to do next, ranging from producing a conference exploring the work of Barbara Seaman, my late mentor, to making a documentary interviewing the men who had raped the women featured in my 2011 documentary It Was Rape. I sat with these ideas and many more for the summer, and by August, I realized I wanted to bring certain books into the world and help them have a life (i.e. get to their rightful readers). Once I saw that I wanted that, the press just unfurled.

It started, for real, when I acquired my first book—which was Not My Idea: A Book About Whiteness by Anastasia Higginbotham. I was like: Okay—I committed to this book. That means I have to create a corporation or an entity that signs a contract for that book. That means I need a name. Once I’ve incorporated as Dottir, now I need a website—Oh! and a distributor. Once I’ve signed a contract with a distributor, I need to produce a season of books on a formal publishing timeline, so that the sales reps can get them to stores and the librarians. Yikes, now I need capital to pay the printer. Where will I store the inventory? Oh, I need to hire a publicist, an art director, go to this trade show…

Each step triggered several others until I was too far away from where I started to turn around and run.

How will Dottir build on the work being done in the realm of feminist literature—and what do you hope it can add to that space?

Even though feminist writing itself has become much more mainstreamed—all big presses publish lots of feminist writing and most magazines and papers incorporate feminist points of view—there remains a significant amount of common stories and experiences that are not depicted in these mainstream settings. That is where Dottir comes in.

I want to actively transmit feminist intellectual production—and never forget that feminist publishing lineage, which is not valorized by the mainstream even as they embrace the profit potential of trendy feminist writing. Dottir is invested in ushering forth narratives that are suppressed in widely distributed channels and setting children’s literature in reality. Challenging things don’t happen to dinosaurs in Dottir books, they happen to children—and the child gets to narrate their experience, not what adults want to believe is true for them because of our own layers of denial.

To me, feminist publishing creates space for people to tell the truth about their lives, who they are and what has happened to them.

You’re one of many Ms. alumna shaking things up in the feminist universe long after your time at the magazine—and you’re still in editorial, editing the Women’s Review of Books. In a media landscape where folks keep shouting that print magazine is dead, you’re stalwart in your work within it. How is that landscape changing, and how is that evolution part of Dottir and the way you approach your work at WRB?

The reality is that books aren’t really in danger of going away. People like to buy them, browse for them, hold them, fall asleep on the beach with them, give them as gifts, show them off in their curated bookshelves. The new tech for books hasn’t really improved upon it so much, even though many people love the convenience of a Kindle.

Magazines, on the other hand—my god, it’s so dismal! In the last five years, most of the places I made my living from as a journalist are simply gone. The Women’s Review of Books is really old school. It isn’t an online entity. It has basically remained impervious to the internet. Its readership—thousands of print subscribers, plus institutional libraries—is loyal and wants to read it as is, in paper and ink. It’s so counterintuitive. I love it.

I believe that there is a heft, dimension and commitment in printed work that isn’t found as easily in work that originates or is meant to be online. The tension between the immediacy and accessibility of online versus the slow, resource-heaviness of print is palpable and productive.

Books first: I often say that books were my best friends when I was a child. It’s true. Childhood is often boring and sad; books are escapes to other worlds and diverting, but not in that daze-inducing “where did the last five hours go?” way of screens. As a child growing up in Fargo, ND, I had a good vocabulary and writing came easily to me, in part because I read all of the time. These qualities weren’t necessarily valued by my peers when I was little, but the older I got, the more books—and the ability to synthesize ideas, string together thoughts, recognize the shape of stories—became a power of mine. In terms of shaping my world view, books have done more than anything else. Experiencing To Kill a Mockingbird or Forever as a tween; reading Zami and The Beauty Myth and Ain’t I a Woman in college—these things changed me.

As for feminism, I do feel that I grew up with it. I was born in 1970; my parents were very influenced by Ms. magazine and the political culture of that time. I always wanted to make books or write articles that were political in that they told suppressed stories—either the story was marginalized, as in the case of feminist history, or the story was silenced, as with rape, abortion, adoption, sexuality—and that is what I’ve done with my writing.

Tell me about some of the work Dottir is already doing. What are you most excited about for its inaugural year, and what is yet to come?

I’m very excited about the first four books, because they represent such a broad array of styles, but all are basically the first of their kind.

Not My Idea is the first children’s book to name racism as a problem of whiteness and attempt to heal the dissociation that comes with socializing white children to feel apart from conversations about “race.” It’s urgently important, but also beautiful. Anastasia makes her books by hand—we then photograph the originals to make the plates for the books—using just materials that were finding their way to the trash. I love the metaphor of that: you have all that you need to make something beautiful and to tell your story.

The Nightlife of Jacuzzi Gasket, by Whiting-award winner Brontez Purnell, narrates a common but never depicted story: when a kid is charged with taking care of a younger sibling at night while a parent is tending to other aspect of her life, what do they do during that time between school getting out and mom getting home?

Wakeful Night by Nicole Skibola is the first interactive cancer journal I’ve seen that is willing to face the darkness of a cancer diagnosis and that has such rigorous art.

Now That We’re Men by Katie Cappiello uses theatre to create a permissive space for teenaged guys to speak honestly about how they are learning masculinity, sex, vulnerability and relationships.

That’s the fall season. I’m about to announce Spring-Summer 2019; it is equally cool—and includes a book that you, Carmen, connected me to: IntersectionAllies!

Just Mercy (Bryan Stevenson), My Year of Rest and Relaxation (Ottessa Moshfegh), The Perfect Nanny (Leïla Slimani), Being Mortal (Atul Gawande), anything by David Sedaris, West of Eden (Jean Stein), Life of the Beloved (Henri J.M Nouwen), The First Bad Man (Miranda July), Lincoln in the Bardo (George Saunders), Bossypants (Tina Fey) and Anastasia Higginbotham’s children’s books. Any of them will keep you going, even as we endure our roles in the low-brow reality show starring Donald Trump that we now call “life.”