The Ms. Q&A: Caitlin Moran Wants to Write What Needs to be Written - Ms. Magazine
Skip to content

Caitlin Moran buzzes when she talks. Not literally, of course—but she buzzes and crackles with life like a live wire. Chatting with her is like drinking a huge cup of coffee and feeling fully invigorated about your life and about getting on with the business of living it.

Moran has already chronicled How to Build a Girl and How to Be a Woman. Now, the English feminist journalist is back with How to Be Famous, a book fit for the #MeToo moment sweeping the globe.

Ms. spoke with Moran this summer at the famed Strand bookstore in New York City after the release of How to Be Famous about feminism, Trump and her “very sexual, but snack-based” self-care. 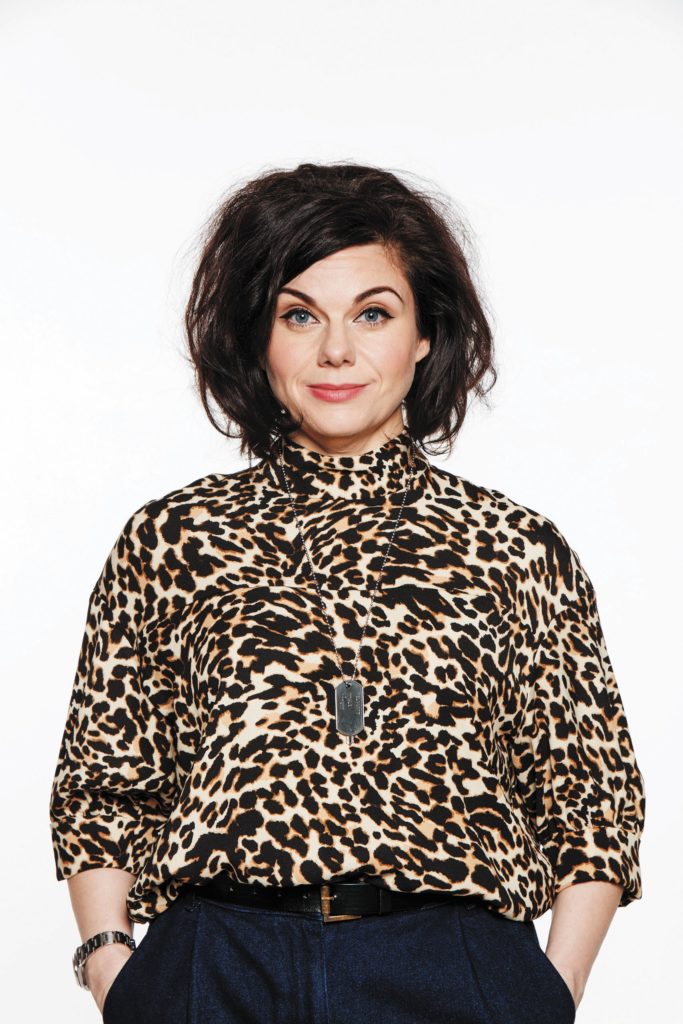 How would you describe How to Be Famous in one sentence?

Powerful famous evil man sexually shames teenage girl and she fights back like a goddess.

A glowing review of the book on NPR said: “Moran reminds us that playing it cool is a waste of living.” What would you say to people who are scared to be truly themselves?

What is your definition of feminism? Why do you feel it’s important to call yourself one?

I call myself a feminist because I do not think it would suit me to wear a sweatshirt that had “please kick me up the ass, the patriarchy” on it, and I don’t have time for that to happen either.

I believe that I, along with 52 percent of the population, have brains and ideas and energy and love and joy that the world desperately needs. And perhaps if the 52 percent of the population who aren’t usually invited to work at the top tables and take part in the biggest committees and take those chairs at the UN were allowed to contribute, and help make the world a better place, we would all benefit from it.

Feminism is not about women winning over men. It’s just literally about equality.

You seem so self-confident. Where does that confidence come from?

Today, it comes from realizing that even though I am in New York, an exciting town where I should be going off and having fun, what I actually wanted to do was a have hot bath, then a wank, then read Nancy Mitford, whilst eating all the chocolate-covered raisins that were in my mini-bar. So today, that’s where my confidence has come from. I knew that was the day that I needed to have. My self-care is very sexual, but snack-based.

How did the publication of How to be a Woman change your life?

Oh, apart from all the money, which was nice—I became so wealthy that I could afford to have pizza for dinner every night of the week if I wished, which for me, is the definition of wealth—it gave me a mandate. It made me realize that the more I talk about taboo things and scary things and secret things, and things that make me a bit sad, and the secrets we want to keep from people, about how bad we feel about ourselves, the more people have gone: “Yes, I need you to sort that out.”

I have not been punished for talking about taboo things and secret things. Instead, I’ve just had literally millions of women saying: “Thank God you’ve said this. I feel better now.” And that is my job.

A writer’s job is that I am being paid to have the time to think about these things, and write them down, and present them in a way that is useful for you—because you don’t have time, because you’re doing another job and that is literally my job. If that’s working, then we’re all playing our part.

What advice would you give to aspiring writers?

The advice that I have for writers is always the same: First of all, you know really if you are a writer, because you will have to write, and you will be writing. If you don’t feel ill on the days you don’t write, if you’re not writing every day, then you’re not a writer. So just, you know, enjoy giving it up and go do something else. Don’t kid yourself that you’re going to be a writer.

And the other problem that you usually have as a writer is: “What am I going to write about? I have talent! What will be the thing I will write about?” And particularly if you’re a girl, or a person of color, or some kind of minority, when you look at the things that have already been written, and you’ve really got to go out there and compete with Roth and Updike and Hemingway, you’ll think: “Those are the people you’ve got to beat, and that’s the kind of stuff you’ve got to write,” which will kill you. Because you can’t write like them, you can’t write the kind of things they do. So instead, you need to pivot 180 degrees over here to all the things that haven’t been written. You say: “Okay, what have I not seen written? What kind of characters have I not seen? What kind of stories have I not seen? What issues have I not seen? What words haven’t been invented?”

You know, there’s one bit in the book where Johanna gets wet, and that liquid doesn’t have a name. We’ve got so many words for spunk, spaff, spooj—we have all these words for sperm. We have nothing for vaginal moisture, which sounds horrible. So that’s what I’ve written about. That’s how much more there is still to write.

Turn to the things that have not been written, and write them.

What would you say to Trump if you met him?

Apart from “please don’t touch me?” I don’t know. I’d just have to look him in the eye and say: “Fuckin’ hell, what did your mum and dad do to you? Like, what did they say? What is this black hole in the center of you that is taking the world down with it? What is this need that you have?”

And then he might cry, then I would comfort him. Sometimes [my friends and I] play this game: “How much do you care about Western Democracy?” [And we say:] So, if you had to have sex with Donald Trump, really awful shame-y sex, but the release of that story brought him down as a sexual scandal, and you could never say that you’d done it as part of a conspiracy to bring him down, you would always have to say: ‘No, I wanted him to poo on me. Genuinely my choice.’ Would you do it?”

My answer has always been “yes” from the beginning. I would literally take that one for the team.

What current projects are you working on?

Well, the film version of How to Build a Girl—that’ll be amazing, and the cast for that is incredible. I wrote the script for it, I’m an executive producer and I chose the entire soundtrack for it, and one of my favorite bands have composed a song for it, which is amazing, but I can’t tell you who that is yet.

And then, I’ve already started work on the sequel to How to Be a Woman, which is called More than Woman. And I realize half of it has got to be about boys. For years, people would say: “What about boys?” And I’ve been like: “I’m too busy with girls! Men need to sort out the men. I’m too busy with the girls!” But then it got to the point that I realized, unless we try and help boys and give them the same thing feminism gives women—a structure to talk about things—then we can’t come up with new ideas, and new ideas of what we can be, and how we can support each other. It’s about consciousness and sharing information.

There’s so much bad stuff in the world today. What gives you hope?

We’re just going through a period of destruction at the moment. It’s always cyclical. It’s always cultural. There’ll be some silence at some point where everybody realizes how fucked we are.

And at that point, people need to step forward with ideas and plans and say: Here’s what we need to do next.

Anne McCarthy is a writer and editor based in Manhattan. She’s a contributing writer to the BBC, The Guardian, Teen Vogue, The Huffington Post, IndieWire, and more. She is a graduate of the Yale Writers Workshop and she has a Masters in Creative Writing from the University of Westminster in London.