Southern Baptists are my people. And while the headlines emerging (thanks to the excellent reporting of the Houston Chronicle) nearly overwhelm me with grief for survivors and renewed anger at Southern Baptist leaders, I feel compelled to offer an insider/outsider perspective.

In the wake of #NunsToo, I wrote about how the patriarchy of the Catholic Church creates an environment ripe for abuse. Ditto all of that for Southern Baptists. As the Chronicle reports, survivors have reported abuse at the hands of Southern Baptist church leaders for decades. They’ve requested a centrally held registry for perpetrators. But the Southern Baptist Convention has done little to address their concerns. Instead, denominational leaders have argued that “local church autonomy” prevents them from doing so.

It’s true that local church autonomy is a key Baptist belief: Baptists practice a democratic congregational polity; every member has an equal vote; each church is independent and makes its own decisions, including decisions about its pastor and other staff; and while individual churches affiliate with local associations, state conventions and the Southern Baptist Convention, none of those associations have any authority whatsoever over the local church.

No Baptist entity can tell a local church what to do. The local church is fully autonomous. That’s a wonderful belief at its core, because it places responsibility for governance directly in the hands of the members of each church. In Baptist belief, each person is equally able to go directly to God without need for a mediator, and God can speak directly to each individual. In theory, then, pastors have no greater access to God than laypeople. All of these individuals, listening directly to God, then have an equal voice in the church through democratic processes.

But when Southern Baptist leaders claim they can’t address abuse because of local church autonomy, they’re just making an excuse.

A registry for perpetrators would not tell local churches what to do—instead, it would be a resource local churches could consult before hiring a pastor or staff member. (The Chronicle identified that abusers moving from congregation to congregation, because new congregations have no access to the pastor’s history, was a driving factor in this abuse epidemic.)

Educating people and churches about abuse and how to report abuse and support survivors also does not require the SBC to tell local churches what to do. The SBC has enormous educational resources, and each Sunday millions of Southern Baptists study from shared curricula that could be used to empower congregations and survivors. The SBC also operates six seminaries that educate pastors and other church staff; if seminary curricula centered issues of power and abuse and seminaries were more vigilant in rooting out perpetrators before they enter ministry, massive progress against widespread abuse could take shape.

The associations and conventions within the SBC also have power to address churches that knowingly hire and/or retain abusers, or quietly dismiss them to be hired by other congregations. (As the Chronicle notes, the SBC has had no problem whatsoever in dismissing congregations that support LGBTQ people or ordain women.)

The reason the SBC hasn’t addressed abusive pastors is not the affirmation of local church autonomy—it’s Baptist beliefs about women, men, sexuality and power.

Despite Southern Baptists’ profession of the equality of all people “at the foot of the cross,” pastors hold a revered position in congregants’ minds, and they hold great institutional power in the local church. And when fundamentalists took over the SBC in the late 1990s, new denominational leaders immediately set out to curb women’s advancement.

In the seventies and eighties, in response to the women’s movement, increasing numbers of Southern Baptist women claimed their call to ordained ministry—and women’s roles in churches and the home then became central items of debate and controversy among Southern Baptists. When fundamentalists gained control, they purposefully and ruthlessly set out to quash women’s ordination and remove ordained women and the people who supported them.

All the while, patriarchal rhetoric about husbands and pastors also became more pronounced. Husbands and pastors now “ruled” over their wives and their congregations. When the SBC passed a resolution in 1984 opposing the ordination of women, they justified it by claiming Eve was “first in the Fall.” Their additions to the denomination’s statement of faith—Baptists are non-creedal, and so have generally agreed upon statements rather than binding doctrinal creeds—relegated wives to “gracious” submission to their husbands.

I’ve written previously about the ways in which evangelical theology supports a culture of abuse. What we’re seeing exposed in the SBC is only further proof. Southern Baptists believe that all one has to do to receive God’s forgiveness is to ask: God forgives, and then so should everyone else; never mind the harm left in the wake of sin, time to move on. Because Southern Baptist theology does not require any kind of restitution or justice for the abused, churches likely feel free to hire a perpetrator and probably truly believe he won’t do it again—because part of the requirement of asking for forgiveness is truly to intend not to commit the sin again.

I imagine many churches that hire perpetrators follow this line of thinking, too, if they know about the abuse and the perpetrator professes that he—and, yes, I do mean he—has asked God for forgiveness. The greater likelihood, however, as the Chronicle’s reporting shows, is that Southern Baptist leaders and churches simply don’t take sexual abuse and assault seriously. They may declare abuse sinful, but their willingness to silence survivors, ignore histories of abuse and refuse to address the problem in the most basic ways at the denominational level suggests that their beliefs about women’s subservience lessens their concern and outrage when it happens. With beliefs about gender deeply rooted in misogyny, the SBC seems unlikely to take abuse seriously.

While Southern Baptists may disagree with Catholics over a lot of theology, they do seem to be unified in their willingness to protect the brotherhood of abusers at the expense of faithful people who have trusted these men who claim to speak for God. Twisted beliefs about local church autonomy and forgiveness in the SBC provide theological cover for inaction by the denomination.

#MeToo, #ChurchToo and #NunsToo are significant. So is the reporting by outlets like the Chronicle and an earlier report on independent Baptists in the Fort Worth Star-Telegram. So are the years of advocacy by former Southern Baptist survivors like Christa Brown (This Little Light: Beyond a Baptist Preacher Predator and His Gang) and Dee Ann Miller (When Pastors Prey: Overcoming Clergy Sexual Abuse of Women,  Enlarging Boston’s SPOTLIGHT: A Call for Courage, Integrity, and Institutional Transformation, and How Little We Knew: Collusion and Confusion with Sexual Misconduct).

The Bible itself says: “For nothing is hidden that will not be disclosed, nor is anything secret that will not become known and come to light.” (Luke 8:17.) It’s about damn time we let more light in. 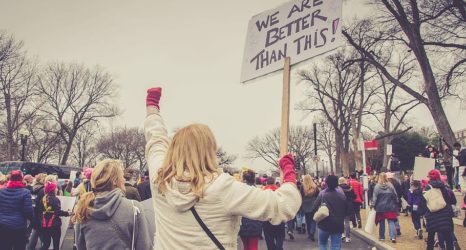 On Christianity and Donald Trump