Much of Dolores Huerta’s life can be traced back to the intersection of First and Chicago streets in Los Angeles, in the historically Latinx neighborhood known as East L.A. In the 1950s and 1960s, in the building that is now Boyle Heights City Hall, the legendary organizer worked with the Community Service Organization’s Stockton branch to advocate for public assistance and register voters; it was there that she met Cesar Chavez, then the Director of the CSO, with whom she would go on to co-found the United Farm Workers in 1962.

That intersection also marked the site of a celebration Saturday honoring the civil rights icon—in which city officials, local movement leaders and city residents came together for the dedication of what is now Dolores Huerta Square.

That afternoon, speeches and musical performances from the main stage echoed past food trucks and tables staffed by dozens of local community and Latinx organizations. Grandmother Gloria of the Tongva Nation began the day with a blessing, and Mayor Eric Garcetti and County Supervisor Hilda Solis followed with remarks acknowledging Huerta’s role as a local organizer and worker’s rights advocate.

“She did not just walk with them,” Garcetti declared, referencing male leaders like himself who were influenced by Huerta—including Martin Luther King, Jr., Robert F. Kennedy and President Barack Obama. “They walked with her. They followed her.” In his remarks, Garcetti called the Boyle Heights intersection one of America’s “historical holy places,” comparing the legacy Huerta formed there to those of other trailblazers from Selma, Seneca Falls and Stonewall.

“She’s been an iconic individual on women’s issues, reproductive rights, helping to inspire young people at this moment in time, even though she’s up in her eighties,” Solis told Ms. after her own speech, describing Huerta as a humble role model and friend. “She has this level of energy and compassion that moves people.” In her official remarks, Solis reminded the crowd of Huerta’s impact during the Obama administration, referencing her own work as then-Secretary of Labor. She also made sure to note that Huerta’s 60-plus years shaping policy were far from over.

“The one thing is that we know the work is continuing,” Huerta told Ms. at the event. “It’s interesting that we’re doing this celebration this weekend, when the Trump Administration has gone on this hostile campaign to try to put as many people in jail and deport as many people many people as they can. And I think that is it’s tragic—that we have a President and administration that would want to punish immigrants instead of them honor them.”

Huerta ended her speech that afternoon by urging the crowd to join her in a chant loud enough to reach the White House. Together, they shouted her favorite catch-phrase, now emblazoned on a city sign hanging at that historic intersection: si, se puede!

“At 89 years old, she can still get the crowd moving,” Academy Award-winning filmmaker Gregory Nava marveled to Ms. when the speeches concluded. “She has lost none of her hope for the future none of her belief in how we are self-empowered. She is not somebody who wants to help people. She is somebody who wants to inspire people to help themselves because we have the power within is.”

Huerta is one of the few the woman to ever be formally honored by the City of Angels. Although Chavez was honored with a boulevard from the city in 1994, the idea for a landmark dedicated to his female contemporary only arose after Nikki Darling wrote a poem less than two years ago called “A Street Called Dolores Huerta.”

“What would it be like to drive down a street named Dolores Huerta? It would be like taking a journey down the road I knew is meant for me,” she wrote. “Let us come together and build it. We need desperately someplace to go.”

Darling was inspired to write the piece when she noticed how many more streets were named for men than women, and how often women were recognized by only their first names. Shortly after, punk rock icon Alice Bag echoed the demand in a song called “I want a Street Called Dolores Huerta.” City Council Member Jose Huizar, who made honoring Huerta one of his priorities this year, took note of their fervor and acted on it.

On Saturday, Darling wiped away tears as she read the same poem to Huerta herself, and Alice Bag performed in the company of Lysa Flores, Drew Tap Girl and the Chulita Vinyl Club to mark their victory. 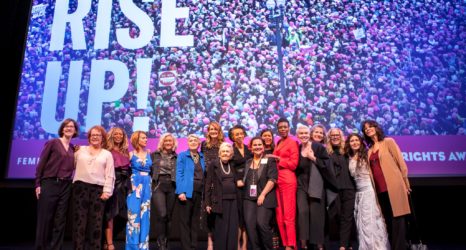 Envisioning the Future of the #MeToo Movement: Four Key Takeaways from the 2018 Global Women’s Rights Awards