The Internet is still celebrating the U.S. Women’s National Soccer Team’s fourth World Cup victory, and we couldn’t be more delighted. The badass team’s victory was made even more iconic by its players’ activism; the team has been speaking out about the wage gap in sports and Trump’s anti-gay and anti-woman policies ever since Megan Rapinoe scored their game-changing goal against the Netherlands.

Co-captain and forward Rapinoe showed off her iconic smirk and glasses while celebrating at the team’s well-deserved parade on the Canyon of Heroes in New York City. The Daily News dedicated its front page to the team’s heroic wins on and off the field, and the image does all the talking in this powerful no-caption post.

Midfielder Morgan Brian shared photos of some of the powerful signs at the team’s celebratory parade with a simple declaration to follow: “It’s a movement.” Judging from the photos, she couldn’t be more right. #SuperiorPayForSuperiorPlay!

Legendary rapper Snoop Dog joined the USWNT’s fight for equal pay in an unexpected but glorious video this week; in typical Snoop fashion, he congratulated the team while calling out the men’s team for, well, not playing as well as the women’s. “Pay them [USWNT players] $500,000 per player,” he declares. “Snoop Dogg Says so.” With Snoop’s official blessing, we can only hope FIFA will listen.

Midfielder Allie Long shared this glorious photo of Rapinoe basking in the glory that is herself, while teammates celebrated alongside her. “Equal play, equal slay,” she wrote in the caption, continuing the team’s fight for gender equality.

We didn’t think we could love her anymore, but co-captain and forward Carli Loyd reminded all the future female leaders of the next generation that they can do anything with her commemorative post. Lloyd’s hope—that the team serves as an inspiration to girls everywhere to follow their dreams—is most definitely our new feminist reality, and we can’t stop reveling in it.

Goalkeeper Ashlyn Harris states the truth and nothing but the truth in her own celebratory champagne shot. We love a woman that knows what she deserves and isn’t afraid to say it!

This is the future liberals want. (Wink emoji.)

Midfielder Rose Lavelle shared this sweet photo of the entire team after their win, calling them her “22 best friends” and making us extremely proud and also jealous.

Journalist, author and activist Julie Scelfo took to the streets to celebrate the team and demand equal pay and the ratification of the Equal Rights Amendment. In case her shirt wasn’t great enough, she also used her sign to mock the disparity in pay and in wins between the men’s and women’s teams.

Actor Gabrielle Union dedicated her #WomanCrushWednesday post to the “23 boss women” of the USWNT for their “courageous stand against the U.S. Soccer Federation for their rights to equal pay after undergoing years of gender discrimination,” calling them role models for women. Her urgent call to the members—to know their worth…and then add some tax—is one we should all keep in the back of our minds (and put on the table at our next salary negotiation). 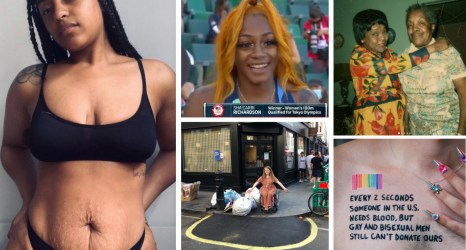