We Are Unstoppable: How Female Philanthropists are Turning Giving Circles into a Movement - Ms. Magazine
Skip to content

Giving circles bring people together to practice collective philanthropy. In the same spirit, representatives of giving circles and giving circle networks across the U.S. are now convening to build power.

And this past April—when 82 members of dozens of giving circles in the U.S. met for two days in Seattle, Washington, to share stories, hopes and plans for building a stronger giving circle movement—women were leading the conversation.

Giving circles allow friends, neighbors, families and people with religious, civil, cultural and other connections to learn about issues of shared concern and decide where to donate their money. They are usually created by women and/or members of ethnic minority, LGBTQ or other marginalized groups—those who typically hold a lesser share of power and money in the U.S.—though many open their doors to anyone with common values. Women make up most of their members.

These philanthropic clubs are often housed at community foundations and tend to address local needs, but some do focus on national or international causes. Along with direct grantmaking, giving circles are known to serve as a springboard for members to become more civically engaged in their local communities. A 2016 study found giving circles had tripled in number since 2007, rising to 1,500. The researchers estimated the giving circles in their database had granted up to $1.29 billion in total since their inception. Giving circles engage tens of thousands of people and dole out tens of millions annually.

“Giving circles are a major part of the future of American philanthropy,” Marsha Morgan, chair of the Community Investment Network (a network of African-American circles) said in a statement. “People are coming together, pooling their money, networks and expertise, and investing in the change they want to make in the world.”

The Community Investment Network and four other giving circle networks are in the midst of a yearlong “co-design process” for the entire movement, tied into the April event for the broader giving circle community. The other four leading networks are Amplifier, which centers on Jewish values; the Asian Women Giving Circle; Catalist, formerly the Women’s Collective Giving Grantmakers Network; and the Latino Community Foundation (LCF), which is home to the largest Latino giving circle network in the U.S.

“There is a rich history of generosity and collective action in our diverse communities,” LCF CEO, Jacqueline Martinez Garcel, said. “We are learning to look to each other for investments, and that’s powerful.”

Following the recent gathering, the leaders released a shared vision with five general goals: to increase public awareness of giving circles, develop more trainings and resources on democratizing philanthropy, create an incubator program for new and developing circles, support new tech that can connect circles with each other and grantees and begin hosting more regional and national convenings.

Starting in 2018, the Bill and Melinda Gates Foundation led the support for this giving circle collaborative design process and event, along with 19 other funders including institutional philanthropies, giving circles, networks and members. This aligns with the Gates Foundation’s increased focus on supporting women in recent years.

Fittingly, many women-centric giving circles took part in the spring event, including For Her: A Black Women Giving Movement for Black Girls, the Women’s Catalytic Fund, Dining for Women and the Inspired Women Paying It Forward Network, among others.

According to Inspired Women Paying it Forward Founder Debra Dion Krischke, it is one of the few giving circles nationally “that has a global focus on women’s non-profits and is looking to open chapters literally anywhere.” Krischke said its mission is simply to create “a space for women who have more in their lives to take action on behalf of women who have less.” She is “passionate about expanding giving circles nationwide.”

At LCF, one of the five leaders of this movement, the majority of staff members are women, as are most of the more than 500 members of its 21 giving circles. “Since the beginning of time, women have come together in circles to make magic, support our communities and heal one another,” Marcia Quinones of the East Bay Latina Giving Circle, which is part of LCF, said. “Giving circles are our modern day solution to the challenges all women are experiencing today in our communities—isolation, a feeling of helplessness and a lack of opportunity to lead and voice our own visions. When we come together, we are unstoppable.”

A version of this article first appeared in Philanthropy Women.

Julia Travers has covered science, the arts and social justice with a solutions journalism lens for outlets like NPR, YES! Magazine, Inside Philanthropy, Philanthropy Women, Truth Out, Waging Nonviolence, Buzzfeed and Her Culture. 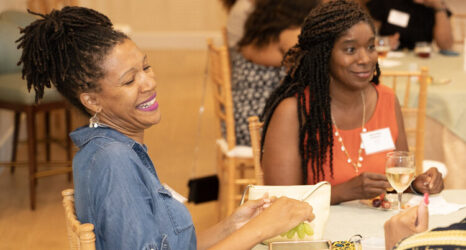 A Call to Everyday Givers: Maximize Your Impact by Giving in Community