While her peers brushed up on AP U.S. Government and Politics, 17-year-old Anusha Chinthalapale spent the afternoon of May 21 on the steps of the Supreme Court. Chinthalapale joined one of 500 simultaneous rallies across America that day denouncing the surge of anti-abortion legislation in states like Alabama, Ohio, Mississippi and Missouri.

The historic event for the country also had personal significance for Chinthalapale. She had previously felt disempowered specifically because she is South Asian—despite the fact that South Asian women and girls in America face unique reproductive rights discrimination. The National Asian Pacific American Women’s Forum notes that sex-selective abortion bans, in place in 11 states, operate on the racist belief that Asian immigrants prefer male children, and disproportionately restrict access.

“It’s always difficult having your voice heard as a woman of color,” Chinthalapale told Ms. “I come from a community that has, for so many decades, staunchly poured more resources, time and ambitions into STEM. Because of years of subconscious stereotyping, people don’t perceive South Asians as politically inclined. But this field affects me, and people like me, the most.”

Chinthalapale got her first taste of activism during her junior year, when she joined a wave of youth resistance that arose from the March for Our Lives movement fighting gun violence.

In January, Chinthalapale became a part of the Women’s March Youth Empower cohort, a panel of 14 students leading events and initiatives hosted by the youth-centric segment of the organization on the national level. At the 2019 Women’s March, she conceptualized and organized the Youth Wave event held the day before, attended by roughly 60 students.  Her roots in the community also earned her the role of DC, Maryland, and Virginia (DMV) regional coordinator—and under her leadership, the DMV has grown into one of the largest regions of the Women’s March Youth Empower, with over 11 chapters and about 100 active young members.

Chinthalapale made intersectionality and women’s rights the center point of her advocacy from the beginning.

“Anusha’s work is important in this current political climate,” said Tabitha St. Barnard, director of community engagement at Women’s March, “because we need the voices of young people of color to lead the way. As part of Women’s March, Anusha is a strong, tenacious voice for young brown women. She is also a fierce ally to other directly impacted communities.”

As the debate over abortion reaches the forefront of national conversation, Chinthalapale is also directly interacting with lawmakers. In June, she returned to D.C. to lobby for the Women’s Health Protection Act, which prohibits the government from restricting abortion services and is currently up for debate.

“We’re not forgetting that lobbying is the most effective way to communicate with federal legislature,” Chinthalapale said, “so we’re focusing our fire.”

She’ll be closer to action this fall, where she’ll be a freshman at George Washington University. She’s planning a town hall in December focused on women’s empowerment and featuring female members of Congress and a gala to raise funds for women of color in the DMV who cannot afford menstrual products.

“I always remind myself: there is a light at the end of the tunnel,” Chinthalapale told Ms. “[I feel] fulfilled every time I see a girl who wants more out of life than just being what someone else told her to be.”

Katherine Oung has written for Teen Vogue and SinceParkland.org. She is the managing editor of Dreyfoos School of the Arts’ yearbook, the Marquee, and the speech captain of her speech and debate team. 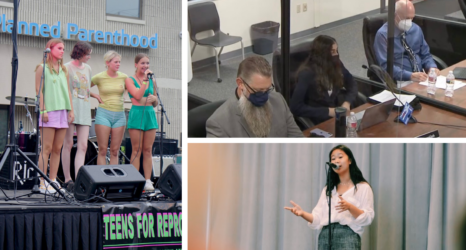