New Yorkers today will vote on Measure 1—and with a population of 8.6 million, the city has the chance to double the number of Americans who currently use ranked-choice voting (RCV) by voting yes.

Eighteen cities already use RCV. And for women candidates, it’s a major boon.

Campaigns that use ranked-choice voting are known to be more civil and issue-focused. Under a ranked-choice voting system candidates have to appeal not only to their core base of supporters to win, but to their opponents’ supporters as well. Candidates who attack their opponents under RCV take the risk of alienating a large group of voters, which could cost them the election. Women have traditionally been discouraged by the ugliness of negative campaigning, but RCV alleviates those concerns.

Plus, negative advertising is expensive, and a civil campaign ensures less-funded candidates have a chance at victory. With RCV, New York City could save up to $20 million every four years by eliminating citywide runoff elections. In elections where no candidate wins a majority of the votes, a second election is held, which is extremely costly. When a second election needs to be held, voter turnout also tends to decline.

Under an RCV system, there is a single general election—which saves cities money, yields a shorter and less-expensive campaign season for women candidates and boosts voter turnout. Ranked-choice voting also eliminates split votes. Under RCV, multiple women can run without hurting each other’s chances, and voters no longer have to worry about voting for the “spoiler candidate.”

In 2016, RepresentWomen found that women won more than 40 percent of all political contests after RCV was put into place in the California Bay Area, and that people of color were winning 60 percent. The team also found that the percentage of candidates of color for local elective office increased by 5 percentage points after the implementation of ranked-choice voting. To put this into perspective, neighboring cities that had not implemented RCV only saw a 0.3 percent increase in the number of candidates of color who ran for local elected office at the time of the study.

RCV has been proven to increase the likelihood of women, people of color and young people running and winning local elective office. Having a government that is reflective of the people it represents guarantees that everyone’s voices are heard. Ranked Choice Voting would be a game-changer for the 2021 electoral cycle in New York City, an “electoral tsunami” of an event projected to attract more than 500 candidates for 35 of the city council’s 51 seats, two citywide offices (including the mayor’s office) and all five borough presidencies.

A ranked-choice voting system is a step towards ensuring all women can run, win, serve and lead—in New York and across the nation.

McKenna Donegan is a junior at Siena College from Syracuse, New York. This fall she is participating in American University’s Washington Semester Program. McKenna joined the RepresentWomen team as a research intern in early September. 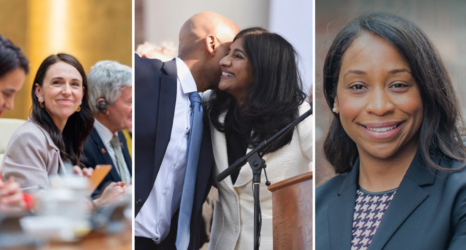