Black Feminist in Public: Veronica Chambers on the Power and Meaning of Beyoncé - Ms. Magazine
Skip to content

Veronica Chambers is a prolific writer, author, journalist and editor. Her editorial projects include the New York Times’ Past Tense, a storytelling archive based on recently discovered photographs digitized by the Times; her anthology, The Meaning of Michelle, featuring 16 writers reflecting on the life of the first Black First Lady of the United States; and, now, the recently published Queen Bey: A Celebration of the Power and Creativity of Beyoncé Knowles-Carter.

She talked to Ms. about the new anthology, and the Black feminist lens that shapes her work.

What led you to work on this collection on Beyoncé?

I had actually edited a previous collection called The Meaning of Michelle, which was about Michelle Obama. And it was my first anthology that I edited, even though I’ve been in a number of them. And after it was over, my editor said we should do another one. I thought, who could we possibly do after having spent two years thinking about Michelle Obama? And she suggested Beyoncé. So, it was kind of an interesting next step because they’re so different. But obviously they both impact culture in big ways.

Not to mention the two women also had a partnership.

Yes. It’s funny, because Beyoncé also came up in the Michelle Obama anthology.

What would you say they have in common?

They both embody Black womanhood in the 21st century; they’re both known for being iconic for the choices they’ve made, for the path they’ve carved. There literally was never anyone like a Michelle Obama. And in a similar way there’s never been anyone quite like Beyoncé. And so, I think that their fans see in them both a fierce sense of independence, so much intelligence, and talent. They’re both women who really have created a unique kind of power. And in that way, I think the books are interesting companion pieces because one of the things that I’m really interested in is power, creativity, freedom. And they both address those issues in different ways.

Obviously, we haven’t had a Black First Lady before Michelle Obama. But when you say we’ve never seen anyone like Beyoncé, she is someone who is coming out of a lineage that includes Black women pop stars like Diana Ross and Whitney Houston. What makes her different when you say there’s never been anyone like her?

I think she’s really interesting because of the way that she created Beyoncé the business. You know what I mean? Obviously, Diana Ross was such a trailblazer, and Whitney Houston had so much talent, but I think in the way Beyoncé has owned her career, it’s really unique. In the way that she drops a secret album. The way that she creates these visual albums, the way that she’s not signed to a label. People sign to her, like Adidas signs up to work with her. It’s not like she’s a spokesperson for anyone else.

What most intrigues you about Beyoncé?

If you look at her social media, you can see early visits to the Louvre, pictures of her with the Mona Lisa, then her taking Blue to Paris when she’s younger… and then they’re shooting in the Louvre for the “Apeshit” video. She had thought about those paintings and that artwork and the heritage of the French lineage of New Orleans. She thought about it all. I think people who dismiss her as somehow being a lightweight or a pretty girl with some lucky breaks—as if you can create at that level without thinking critically!—that is actually just another sign of misogyny and how women are discounted for what they create. When we make exquisite things, people assume there are fairies in the night who do it with magic dust instead of looking at the work and the research and the effort that goes into it.

Oh, absolutely. And you realize that she’s definitely doing the research. I think that there is a two-way communication going on between the pop star and her audience, whether they’re fans or not. That’s also what makes her very compelling. I became a Beyoncé fan, and not just a Beyoncé scholar, after Lemonade, which was so phenomenal: the visual, the spoken word, it really came together so well, and while it could have just stayed on the level of her marital strife with Jay-Z, she just took that narrative to this next level where it became poetic, historical and political.

Oh my God, there’s just so many layers in it. And I think that’s the beautiful thing. I’m still listening to The Lion King: The Gift album, and I just think all the references to Afrobeat and the connection to the motherland, and women and men, and strength and spirituality, beauty—there’s just so much there, and it makes it not boring.

You asked what makes her different from some of the artists that preceded her, and obviously she’s in a pantheon of greats, but when you think of all the people who were part of that early ’90s R&B moment, what’s made her continually interesting is that she continues to tell a different story, and she connects the dots between one story and another and another. She has a Scheherazade quality to her music, so you don’t feel like you’re handed an album made by a label. You’re on this kind of storytelling journey. It’s like: Where is she now? What’s going on? Where are we going next? And the same way you trust a great writer to carry you along, I think her fan base is so powerful because there’s a lot of trust there, and she doesn’t disappoint. She always delivers what she’s promised.

How did you select the authors for this particular volume on Beyoncé?

When I think about an anthology, I think about a great dinner party. I think about: Who do you want to have at the table? And I’m such a big fan of Luvvie Ajayi, I just think she’s so funny and smart, so I definitely wanted to have her. I’m a big fan of Brittney Cooper who was already in the Meaning of Michelle anthology, so I wanted her back. Also, Melissa Harris-Perry. I had approached both Melissa and Mankappr Conteh, who was a former student of hers, and I went to them both individually, partly because I know that Melissa teaches Beyoncé and talked about her and I thought it would be interesting for them to write about their perspectives, both generationally but also about Beyoncé in the classroom. Mankappr ended up writing her piece first, and then Melissa weaved her piece into that. Candice Benbow is in the book. I love her! Of course, I admire Michael Eric Dyson so much, and Sir Edward Enninful, the editor of British Vogue who is such an interesting person in fashion.

I wanted to talk about different things: fashion, music, womanhood, colorism. I brought in different voices to set the table, so to speak. I love a good dinner party.

I notice a number of these authors are self-identified Black feminists. Would you identify this project as a Black feminist anthology?

Absolutely. I came up in a lineage of having been in school and reading people like Barbara Smith, and so I feel like everything I do is rooted in the idea of Black feminism. Mostly because of that Anna Julia Cooper idea—”when and where I enter the whole race enters with me”—so I know my work through a Black feminist lens isn’t limited. It’s actually a really powerful and wide lens to work through.

What are you hoping to accomplish with this anthology?

The great thing about this anthology for me has been really just giving people a way into thinking about the music, just like the Lemonade Reader does in terms of bringing it into the classroom. I just love the conversations and the sparks that come from the different essays. I like the fact that writers keep talking to each other.

I also think that anthologies are great. I’m a mom, and one of the things that I love about anthologies is you can dip in and read a five-page essay and get back out. I think that there is a way that you can consume anthologies that makes it really great for our moment.

And I just love being part of that conversation. I love when people say, I read this one piece and it really spoke to me, and I think that’s powerful. I also feel like it’s a great companion piece to my Michelle Obama anthology because, especially as women, I think we’re constantly curious about how we make a life for ourselves, what are the choices we make with marriage, with motherhood, with friendship, with family. And I think that’s what’s at the heart of this book, of these two books. What they have in common is that they’re deep dives into the choices that these two iconic women have made that have led to where they are today.

From Y2K to Today: a Timeline of Celebrity Feminism Over The Last Two Decades 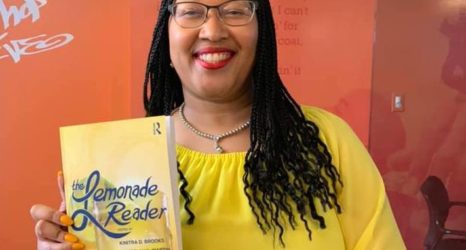 “The Lemonade Reader” Adds Beyoncé to the Black Feminist Canon