Trump Administration Wages War on the Affordable Care Act in the Midst of the COVID-19 Pandemic - Ms. Magazine
Skip to content

In the midst of a worldwide health crisis, the president has also doubled down on his support for a lawsuit challenging the Affordable Care Act.

As the coronavirus pandemic surges in the United States, straining the limits of our health care system, Trump still wants to “terminate” a law that has extended coverage to millions of Americans.

And despite claims he wants to “back preexisting conditions,” he offers no alternative plan to replace the current protections that would be lost.

Despite the way the law has vastly improved American life over the past ten years, the president is urging the federal judiciary to invalidate the entire Affordable Care Act (ACA). If successful, nearly 20 million people could lose health insurance; 135 million people with preexisting conditions—including having survived cancer, pregnancy and diabetes—will lose desperately needed protections; and nearly 12 million seniors will pay more for prescription drugs.

Given the vulnerability of these individuals to COVID-19, the last thing we should do is make it harder for them to access the care they need.

How Women Particularly Benefit from the Affordable Care Act

For women, this decimation of the ACA could be particularly devastating. According to Protect Our Care, insurance companies will be able to charge women 50 percent more than men.

Contraception coverage for 60 million people who now have access to birth control with no out-of-pocket costs will be eliminated.

The ACA made a difference especially for women of color and low-income women. For example, between 2012 and 2014, the uninsured rate for Black and Latina women fell nearly 7 percent and 9 percent, respectively.

For women living at 200 percent of the federal poverty level or lower, uninsured rates fell a whopping 16 percent between 2010 and 2016, with consistent results across all races and ethnicities.

The “Far-Fetched” Measures to Quietly Dismantle the ACA

In February 2018, Republican attorneys general and governors filed a lawsuit arguing that the entire ACA was unconstitutional.

Despite the duty of the Justice Department to defend acts of Congress, Trump’s DOJ supported the effort—ignoring the objections of many of the department’s career attorneys.

In fact, the decision not to defend the law was not based on a careful analysis of its legality, but was made after “the president’s chief of staff and others convinced [Trump] that he could do through the courts what he could not do through Congress: repeal his predecessor’s signature achievement,” according to the New York Times.

The Trump administration has argued that because the Republican Congress zeroed out the monetary penalty in the ACA for not buying health insurance, the individual mandate provision of the law is unconstitutional; and because that one provision is invalid, the entire law must be struck down.

Yet, as the coronavirus emergency has grown, there hasn’t been a peep about rethinking this absurd legal challenge.

A Key Weapon: Stacking the Courts with Conservative Judges

Appointing judges who will turn the clock back on our rights and freedoms has long been a central goal of the Republican Party. A trial court judge appointed by George W. Bush in Texas—a former aide to Republican Senator John Cornyn—declared the entire ACA unconstitutional. Two Republican-appointed appellate judges, including one appointed by Trump, then kept the lawsuit alive.

This fall, the Supreme Court will determine whether to take away millions of people’s health care based on a frivolous legal theory with clearly partisan intentions.

President Trump promised, “My judicial appointments will do the right thing—unlike Bush’s appointee John Roberts on Obamacare,” and that promise has come to fruition.

Supreme Court Justice Brett Kavanaugh, is already on record opposing the ACA. While on the DC Circuit, he dissented from two rulings upholding the Affordable Care Act. One of Kavanaugh’s clerks, Sarah Pitlyk—now a judge whose confirmation was supported by nearly every Republican senator—said of Kavanaugh, “No other contender on President Trump’s list is on record so vigorously criticizing the ACA.” Another Kavanaugh clerk, Justin Walker—also confirmed by Republicans to be a judge—lauded Kavanaugh for writing the “roadmap” for ACA repeal in the Court.

The coronavirus pandemic is shining a giant spotlight on the inadequacies of our health care system, as families struggle to figure out how best to obtain the care they need.

This should be a moment to consider how we can continue to increase access to health care—but the president and his judges would prefer we return to a time when far fewer American had coverage, and when the most vulnerable among us couldn’t access it.

Nan Aron is President of the Alliance for Justice Action Campaign. 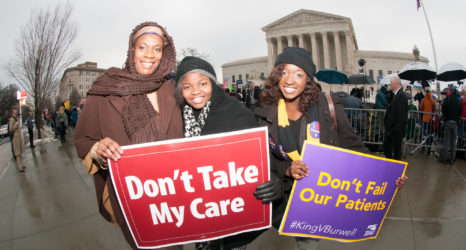 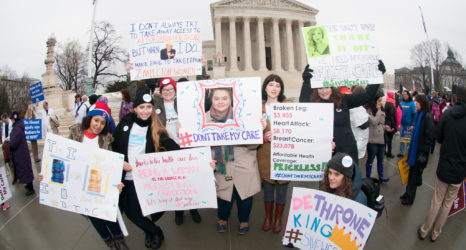