For the last eight months, Chelsea Cheyenne Becker has been locked up in Kings County Jail in Hanford, Calif., charged with murder after giving birth to a stillborn son.

In September of 2019, hospital staff at Adventist Health Hanford in a rural part of the San Joaquin Valley in California called the police on Becker based on suspicions that she had used methamphetamine while pregnant. Six weeks later, Kings County District Attorney Keith Fagundes charged Becker with murder, claiming without any scientific basis that methamphetamine use caused the stillbirth. Fagundes denied that the prosecution was political, calling himself “neither pro-life nor pro-death.”

Becker remains in jail because she can’t afford to pay bail, which was originally set at $5 million, then lowered to $2 million.

“Prosecutors are bending the law in a way to permit them to criminally prosecute people for the outcomes of their pregnancies,” said Farah Diaz-Tello, Senior Counsel for If/When/How: Lawyering for Reproductive Justice.

“California law is pretty clear. If the state is going to charge somebody for a crime against a fetus, that law doesn’t apply to what a pregnant person did or didn’t do. There are important reasons for that given even now with modern medicine, pregnancy is still unpredictable.”

In 1970, the California legislature amended the state’s murder statute to add fetuses as potential victims—but meant for the law to apply to people who harmed pregnant women, not to pregnant women themselves. Shortly before the amendment, the California Supreme Court had overturned the murder conviction of a man who beat his estranged wife and caused her to deliver a stillborn baby.

Subsequent amendments to the murder statute explicitly exempted abortion, as well as “any act resulting in the death of the fetus where that act was solicited, aided, abetted or consented to by the mother of the fetus.”

“Anything that a pregnant person does or doesn’t do might affect a pregnancy,” Diaz-Tello told Ms.—so Becker’s prosecution is “potentially opening the door to criminally prosecuting someone who goes downhill skiing or horseback riding.”

In several cases prosecutors have tried to use the law against pregnant women, as in the 1992 case of Roseann Jaurigue, but California courts have unanimously agreed that the murder law cannot be applied to pregnant women who lose a pregnancy.

But two years ago, the Kings County prosecuted another woman—Adora Perez—who experienced a stillbirth after using meth. She pled guilty to a murder charge and is now serving 11 years in prison.

If Becker’s case goes to trial, it will be the first time a California court has permitted a murder trial against a woman for acts she committed while pregnant that resulted in the loss of her child.

Becker is represented by the National Advocates for Pregnant Women (NAPW), with the support of national and state medical, public health and policy organizations, who have filed an amicus brief arguing for Becker’s release. The groups include the American College of Obstetricians and Gynecologists (ACOG), the California Coalition for Women Prisoners, California Latinas for Reproductive Justice, National Women’s Health Network, and Our Bodies Ourselves. They argue that substance use disorders are medical conditions, not criminal behavior.

“The unequivocal consensus among virtually every other medical or public health organization in the United States is that use of controlled substances by a woman during the course of her pregnancy is a medical and public health issue, not an issue that should be subject to state intervention and control,” says the brief.

The threat of criminal prosecution in fact endangers maternal and fetal health, they argue, by deterring women from obtaining treatment and prenatal care. Diaz-Tello agrees.

“If people are afraid that when they seek medical help that they are going to be turned over to law enforcement, that’s going to deter people from seeking that help,” Diaz-Tello told Ms.

Prosecutors contend that Becker should have known that methamphetamine use could cause a stillbirth—but research shows no higher incidence of stillbirth among fetuses exposed to methamphetamine than among a control group.

Dr. Tricia Wright of University of California at San Francisco, who researches the effects of meth on fetuses, filed an affidavit in the case arguing that while meth use “can be a risk factor for a stillbirth, it’s certainly not causative—any more than prosecuting someone for having diabetes during pregnancy, which can also increase the risk of stillbirth.”

According to Dr. Wright and her colleague Dr. Mishka Terplan, “research shows that pregnancy outcomes have far more to do with economic, social and environmental conditions experienced in the course of one’s life, rather than anything one does or does not do while pregnant.

“Addiction is a chronic illness not a moral weakness and it is best addressed through healthcare not incarceration,” says Drs. Wright and Terplan.

Major medical and public health organizations agree—including the American Medical Association, the National Perinatal Association, and the American Society of Addiction Medicine, which have broadly condemned the criminal prosecution of people for the outcomes of their pregnancies.

But in June of this year,  the superior court denied Becker’s motion to dismiss the charges. She has appealed.

On August 8, California Attorney General Xavier Becerra filed an amicus brief in support of Becker, arguing that the prosecutor “misapplied and misinterpreted” the law. According to Becerra, the law “was intended to protect pregnant women from harm, not charge them with murder.”

“Our laws in California do not convict women who suffer the loss of their pregnancy, and in our filing today we are making clear that this law has been misused to the detriment of women, children, and families. We will work to end the prosecution and imprisonment of Ms. Becker so we can focus on applying this law to those who put the lives of pregnant women in danger.”

Becker is one of hundreds of women who have been arrested and prosecuted nationwide after experiencing miscarriages or stillbirths on a range of charges, including fetal assault, child abuse and chemical endangerment.

Last year, Alabama prosecutors charged Marshae Jones with manslaughter after someone shot her in the stomach while pregnant.

NAPW founder and president Lynn M. Paltrow has documented 413 such arrests in 44 states and the District of Columbia between 1972 and 2005—84 percent of which involved drug use. She estimates that another 900 arrests have happened since then, although few cases result in successful prosecution because it is difficult to prove what causes a miscarriage or still birth.

NAPW condemns Becker’s confinement that not only “denies her freedom and tore her away from her family, but also puts her at serious risk of contracting COVID-19.” They have launched a campaign to raise awareness of the case and demand Becker’s release.

“For the state to say that they can punish pregnant people on behalf of the fetuses they carry creates unlimited opportunities for criminalization,” Diaz-Tello told Ms.

“If a person can be punished for using a criminalized drug, then they could also be punished for other things, like not getting enough exercise, working a job that requires them to be on their feet which can have an adverse effect on a pregnancy or, during COVID-19, even for not taking appropriate social distancing measures. There’s almost no end to the ways that the state can control pregnant people if they can charge them with a crime for their own pregnancy.” 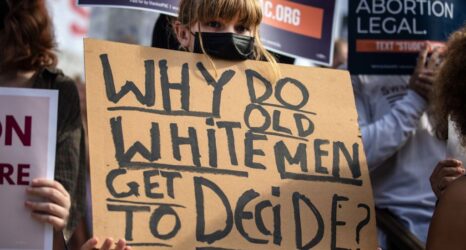