A war of attrition involves “the sustained process of wearing down an opponent so as to force their physical collapse through continuous losses in personnel, equipment and supplies or [wearing] them down to such an extent that their will to fight collapses.” This is, indeed, how many attorneys representing asylum seekers, and doubtless our clients, feel today.

I am an asylum attorney. I represent immigrants fleeing persecution and torture who seek safety in the United States. The onslaught of targeted policies, executive orders, proposed regulations and attorney general decisions undermining asylum protection has been non-stop under the Trump administration. But, as a mother, as an aspiring and yet imperfect feminist, as a woman and as a voter—despite my exhaustion—I am compelled to speak.

The Matter of A-C-A-A- decision issued by Attorney General Bill Barr last month is not by any means the first action taken specifically targeting asylum-seeking women. Indeed, Barr’s predecessor, Jeff Sessions, took direct aim at women asylum seekers in 2018 when he issued a similar decision in Matter of A-B-. Both AGs have made heavy use of a provision in the regulations allowing the AG to certify any case to himself that he does not like and overturn the result, even when the underlying case is well-established precedent.

The disregard for legal precedent is one of the most dangerous aspects of this administration. This specific focus on attacking gender-based asylum is accompanied by regulations, proposed in June 2020, which aim to entirely eliminate asylum claims based on gender.

So great was the public alarm at these proposed regulations, that over 86,000 members of the public submitted a comment. We now await the final version of the regulations, which would eviscerate asylum protection almost entirely.

In his decision, AG Barr emphasizes that it is “especially important to scrutinize where the asserted particular social group encompasses many millions of persons in a particular society.”

The “many millions” he is referring to are women. Despite the very foundation of the 1951 Refugee Convention being the Holocaust, where millions of Jews and others were targeted on account of protected characteristics such as religion and political opinion, anti-asylum zealots—like Sessions and Barr—repeatedly invoke the fear of the floodgates opening and women from all over the world coming to the U.S. to seek protection.

The same was said in 1996 when the first case based on a fear of female genital cutting was granted, and the same was said over and over again in the back and forth Rodi Alvarado’s case—a Guatemalan woman seeking, and eventually granted asylum after a 13 year saga, because she fled extreme domestic violence at the hands of her abusive partner. The floodgates have not opened and these fears have not materialized.

AG Barr, like his predecessor, tries to suggest that taking into account “countrywide negative cultural stereotypes” is inappropriate evidence to consider.

Yet, here, the AG tells his employees, the Board of Immigration Appeals and immigration judges, to close their eyes to well-documented cultural phenomena—including, for example, machismo and the exceeding high levels of femicide (killing of women) in El Salvador, as “inappropriate” evidence to consider in an asylum claim.

This decision is just one more hurdle for women seeking protection in the United States. In a few weeks, I will represent a Congolese survivor of horrific violence before a U.S. asylum officer. A few weeks later, I’ll be in immigration court before a judge considering a young Honduran mother’s right to be protected from the dangerous man who seeks to make her “his” woman. The stakes just got even higher in both of those cases and countless others.

Women’s rights are a hot topic of conversation at the moment. Supreme Court Justice Ruth Bader Ginsburg led strategic litigation to advance women’s rights prior to accepting a seat on the high court. With her passing and Trump’s nomination of conservative anti-feminist Amy Coney Barrett to fill the vacant seat on the Court, women’s rights are about to be fundamentally called into question and tested before the Supreme Court, potentially for decades to come.

In this moment, American women should ask ourselves whether we are comfortable with four more years of men like Donald Trump, Stephen Miller and Bill Barr, and women like Amy Coney Barrett dictating immigration policy and policy in general as it intersects with women’s lives.

And we should vote like our lives depend on it because those of our immigrant sisters—fleeing tragedy and seeking protection—most certainly do.

Lindsay M. Harris is a Visiting Associate Professor at American University’s Washington College of Law and the Director of the UDC Law’s Immigration & Human Rights Clinic. She is Vice-Chair of the American Immigration Lawyers Association’s National Asylum Committee and of the AsylumWorks Board. 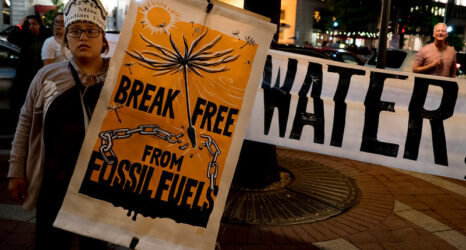 On November 3, Women Will Choose America’s Role in the World 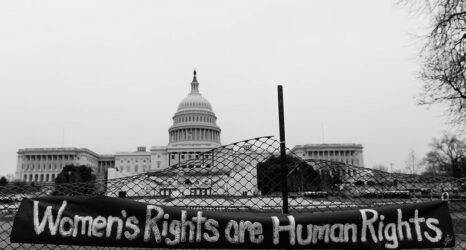