#UnpackTheCourt: Amy Coney Barrett and the Case for Expanding the Number of Justices - Ms. Magazine
Skip to content

The only way to rebalance the court in the near future is to expand the number of justices on the Supreme Court and fill the new seats with people that mirror the demographics and beliefs of the American people.

Republicans are making, breaking and changing the rules for Supreme Court appointments in order to pack the Court with right-wing ideologues determined to reverse decades of progress for women’s rights. If Democrats take the Senate and the White House next month, they must address this grave threat to democracy by expanding the number of justices on the Court.

In 2016, Senate Republicans blocked President Barack Obama’s nomination of Merrick Garland to fill the vacancy left open by the death of Antonin Scalia. They argued that the Senate should not hold hearings or vote to fill a vacancy on the Supreme Court during an election year. At the time, they promised that they would not fill a vacancy if one were to open in 2020.

But they have now broken that promise by moving forward with Trump’s nomination of Amy Coney Barrett to fill the seat left open by the death of Ruth Bader Ginsburg, who died in late September—just 46 days before the 2020 elections (Scalia died 264 days before the 2016 election).

Senate Republicans also abolished the decades-old filibuster rule for voting on Supreme Court nominees in 2017. The filibuster rule required that 60 out of 100 Senators to agree to move forward with a vote on a nominee. Now, a simple majority of Senators can confirm a new justice to a lifetime appointment on the Supreme Court.

As a result, Republicans have been able to pack the Court with ideologically extreme justices that threaten to obliterate women’s rights, restrict voting rights and civil rights, reduce government regulation of corporate interests, and overturn the Affordable Care Act. If the Senate confirms Barrett, Trump will have appointed one-third of the Supreme Court justices, and conservatives will have 6-3 control over the Court.

Senate Republicans’ removal of the filibuster and their duplicitous about-face on considering Supreme Court nominations during an election year is an affront to democracy, and demands a strong response from Democrats.

Addressing Republican Hypocrisy, Cynicism and Injustice in the Courts

Many ideas have surfaced on how to address this injustice.

One is to impose term limits—but this would require a constitutional amendment, which would be unlikely to pass.

Another option is to reform the nomination and confirmation process, such as requiring a two-thirds vote of the Senate or confirmation from both houses of Congress. Some support national elections for Supreme Court justices or requiring a 7-2 vote to overturn congressional acts.

But the only way to rebalance the court in the near future is to expand the number of justices on the Supreme Court and fill the new seats with people that mirror the demographics and beliefs of the American people.

“Congress would be totally justified in increasing the size of the court,” wrote constitutional law scholar and Berkeley law school dean Erwin Chemerinsky in the Los Angeles Times.

Elie Mystal, writing in The Nation, agrees: “Expanding the Supreme Court may not be easy, but it’s the only constitutional way to address the Republicans’ cynical theft of at least two seats.”

What Does the Constitution Say About the Makeup of the Supreme Court?

The judicial Power of the United States, shall be vested in one supreme Court, and in such inferior Courts as the Congress may from time to time ordain and establish. The Judges, both of the supreme and inferior Courts, shall hold their Offices during good Behaviour, and shall, at stated Times, receive for their Services, a Compensation, which shall not be diminished during their Continuance in Office.

The number of justices on the court has changed over time, ranging from six to ten.

From 2016 to 2017, by refusing to consider President Obama’s nomination of Merrick Garland, Senate Republicans reduced the number of Supreme Court justices from nine to eight, unilaterally and without a vote of the full Senate.

The caseloads have also expanded significantly. Federal trial courts today receive almost 25 times the number of cases as they did in the 1870s (15,141 cases in 1873 versus over 376,000 cases today).

As a result, the Supreme Court receives way more cases than it can handle. Of the 8,000 cases filed each year, the Court only has time to hear about 80 of them. In other words, a tiny fraction of cases (1 percent) are ever heard by the high Court.

This paltry rate of review limits the Court’s ability to resolve conflicts among the Circuit Courts of Appeals and make the law more uniform across the states. The increasing caseload as well as the increasing complexity of cases warrants expanding the number of justices on the Court.

More justices on the Court will also lower the stakes for any one Supreme Court seat. With lifetime appointments, as required by the Constitution, and people living much longer than in 1860 when the number of nine justices was set, a justice may sit on the Court for decades.

Presidents nominate younger and younger people, so they may be on the court for two generations. (If confirmed, 48-year-old Amy Coney Barrett would be the youngest justice on the bench.) Expanding the number of justices on the Supreme Court will decrease the impact of any single appointment and mean that there’s less at stake when it comes to filling a vacancy.

A larger Supreme Court could allow for more diversity, including gender, racial, ethnic and religious diversity—but also more diversity of background, experience and perspective. It could allow the Court to better reflect the American people and to support our democracy rather than tearing it down.

Trump and Senate Republicans have packed all levels of federal courts with right-wing ideologues, many of whom have weak legal backgrounds and/or little judicial experience, according to the Alliance for Justice. For example, when Trump nominated Amy Coney Barrett to the 7th Circuit Court of Appeals, she had never served as a judge and had practiced law for only three years (doing research to support George W. Bush in Bush v. Gore) before becoming a law professor.

So far Trump has appointed 218 judges to the federal bench—one quarter of all federal judges. And Trump has made another 35 nominations.

This takeover of the federal courts was orchestrated by a coalition of evangelical Christians seeking to overturn Roe v. Wade and the Koch brothers and other wealthy corporate interests—most notably, insurance companies—seeking to abolish government regulations. They could not achieve their goals through democratic processes, so they found other ways to do it. Together they are undermining democracy and the well-being of Americans.

“To allow the American people to govern themselves, to rein in the judiciary and break a would-be reactionary super-legislature—to show Republicans that they cannot keep the ill-gotten gains of the Trump years—Democrats will need to expand the courts,” says Jamelle Bouie in the New York Times. 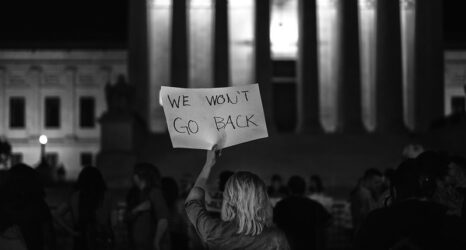 ‘This Is An Emergency’: America Left Reeling in Wake of Likely Roe v. Wade Reversal 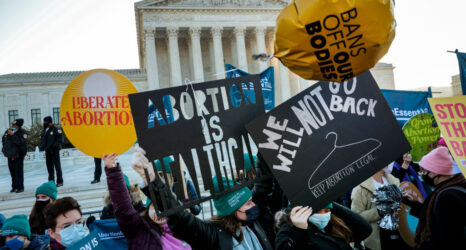 Our Favorite Signs From the Nationwide ‘Bans Off’ Marches
It’s Asian Pacific American Heritage Month and My Life Is Still in Danger
The U.S. Is Facing a Maternal Health Crisis. Is Climate Change Making It Worse?