How Women and Girls are Ending the Fossil Fuel Era - Ms. Magazine
Skip to content

“Right now, women and girls the world over are leading the way to the end of the fossil fuel era. Our challenge is to be brave enough to follow their leadership and to have their backs and support their hard work on all of our behalf.”

This is an edited and shortened version of a TEDx Talk by renowned award-winning investigative journalist Antonia Juhasz delivered this month. Watch the full talk on TED.com here, and below.

We face a global climate crisis; its cause is as well-known as its cure. We are destroying our home by the way that we produce and use fossil fuels. The solution? Produce and use less fossil fuels—better still, use none.

Right now, women and girls the world over are leading the way to the end of the fossil fuel era. Our challenge is to be brave enough to follow their leadership and to have their backs and support their hard work on all of our behalf.

I’m an investigative journalist specializing in oil. I’ve reported from the front lines of conflicts over fossil fuels and the climate crisis from Afghanistan to Alabama and from Alaska to the Amazon. I have been astounded by the continuity of the stories of the women and girls I have reported on who are today’s climate justice leaders.

Their stories often begin with a debilitating fear—of the climate crisis, the oil company where they live, the politician controlling their fate, for the health of their children, or for what the future may bring. They describe overcoming their fear through action.

Joining together in broad social movements, they’ve achieved tangible solutions. This gives them hope and a new vision for the future, one that is free of fossil fuels.

They also face a common hurdle: invisibility. In fact, women are quoted as experts in less than 20 percent of all global news stories.

I share a few of their stories with you below.

In January, I reported from the near Northernmost tip of Norway in the Arctic Circle on a meeting of Arctic nation military and political leaders (mostly all male) debating whether the Arctic is set to become “the new Middle East”—an area defined by conflict, even war, over the pursuit of oil.

As one speaker put it: “I’m just not seeing how we can survive without fossil fuels.”

Politely raising her hand from the audience, Inupiat Native Alaskan Lucy Nelson, expressed no such fear. The mayor of Alaska’s Northwest Arctic Borough, Nelson described innovative ways that she’s leading her community away from fossil fuels, implementing small-scale solar and wind solutions replacing diesel generators for homes and saving on both air quality and energy bills. She asked for help to expand her local program.

Outside of the conference, 11-year-old girls Lina and Runa stood boldly beside a banner protesting against new Arctic oil drilling.

They reminded me of 12-year-old Angelika Soriano, a self-described “Warrior for Justice” who I interviewed in Oakland, Calif., for Ms. as she protested against a proposed coal terminal. Soriano argues her asthma—that of her sister and far too many of their friends—is caused by fossil fuel pollution.

It is this same air pollution from cars and trucks, refineries and the like, that is today increasing the likelihood of death from COVID-19, and disproportionately so in low income communities of color like Sorianos.

At first, Soriano was terrified to speak out. But she described looking out at the faces of those who had come to protest with her she and a feeling coming over her that “they were all one.” “I became very brave and courageous,” she told me.

She then said to the crowd: “I know I might be little, but I can make a huge impact on this earth.”

Keep It In The Ground

Angelika, Lina and Runa are advocating for “keep it in the ground” policy, an approach supported by the findings of the United Nations Intergovernmental Panel on Climate Change. Its 2014 report revealed that to avert the worst of the climate crisis, some 80 percent of fossil fuels must stay in the ground.

In 2013, I reported from Ecuador for CNN. In Quito, I interviewed Esperanza Martinez, president of Acción Ecológica and the recognized grandmother of “keep it in the ground” policy.

Nearly 25 years ago, Martinez joined partners in Nigeria to release a first-of-its kind declaration demanding the end of oil extraction and to “leave the oil in the soil” worldwide. Doing so is fundamental to confronting environmental racism, they argue, as communities and nations of color disproportionately bare the harms of oil extraction while others enjoy the benefits.

“What you lose with oil is life and nature. What you reclaim without it is imagination… The challenge is to unsoil your brain; wring the oil out and make room for the ability to embrace alternatives. … It is absolutely possible to live without oil. More than that, it is absolutely necessary.”

I left Quito traveling deep into the heart of the Amazon rainforest with Native Waorani tribal leader, Alicia Cahuilla. Cahuilla was born in Yasuni, one of the most biologically diverse places left on earth. It also sits atop Ecuador’s largest largely untapped oil reserves. Alicia is often told that exploiting this oil will end poverty, bring jobs and wealth. She replies, “We have the richness of the forest and the river. We need for nothing, except what the oil companies destroy.”

Cahuilla has unlikely allies in her fight against the oil companies—the Kichwa tribal community. There is a long history of conflict between the Waorani and Kichwa, yet the women are joined today in this struggle. Many seek a new internationally recognized category of conservation, “the Living Forest,” which would allow for the permanent protection of native forest lands as sacred sites free from extraction.

The past fall, I reported from St. James Parish, Louisiana, for Rolling Stone Magazine. I interviewed 67-year-old Sharon Lavigne who lives in “Cancer Alley,” where some 150 fossil fuel and petrochemical facilities operate. Most of these operations—which are increasingly dedicated to plastics production—are concentrated in areas with the highest percentage of black and poor residents.

A retired special education teacher, at first, Lavigne was terrified to speak out. But she says, she had little choice. The industry promised jobs but instead brought pollution, treating residents as if “we’re not human beings.” It is racism that allows the industry to target her black community founded by former slaves.

Lavigne said, “They’re killing us. And ­­­that is why I am fighting.”

Over gumbo, Lavigne and a small group of friends formed RISE St. James to take on the industry. They’ve already forced out two petrochemical companies and are demanding a full moratorium on any new facilities. They want a Green Economy built on local green jobs.

Why Women and Girls Lead

One reason why women and girls lead these efforts is the disproportionate harms they face from climate change and fossil fuels. Women and children are, for example, 14 times more likely to die in a climate disaster then are men. While living near oil and gas operations increases the likelihood that women will suffer preterm births—the leading cause of infant death in the U.S.

Women and girls are also responsible for up to 80 percent of the world’s food production.

Emem Okon, founder and executive director of Kebetkache Women Development and Resource Centre in Nigeria, helped me understand these interwoven threads. I interviewed Okon for Ms. as she protested against Chevron. Its persistent oil spills and gas flaring, she explained, pollute the streams and the soil, leaving them unfit for the fishing and farming on which women disproportionately rely.

Half a century of oil spills by Chevron and other companies has left southeastern Nigeria one of the most polluted places on earth. Worsening drought and floods brought on by climate change further erode the women’s ability to harvest these resources.

Last December, Okon organized a national Niger Delta Women’s Day of Action mobilizing over 3000 women and young girls from across the Delta to achieve environmental and climate justice.

The women I’ve interviewed abound in solutions, but they are virtually nonexistent among the leadership of the global energy industry. Many oppose having those same companies shift from fossil fuel to renewable energy corporations. Fossil fuels are not renewable, but they are natural, humans have cohabitated with these resources for millennia.

The damage these companies have done in just the last 150 years through their control over oil, natural gas and coal leads many to question whether we should entrust these same companies today with the sun, wind and waves. Women I’ve interviewed from Afghanistan to North Dakota to Ethiopia are instead far more focused on building localized, small-scale, renewable, sustainable and equitably owned and distributed energy and transportation solutions.

Yet, just a miniscule amount of the money that has gone to climate change finance globally targets the local level where women are more likely to exert influence. Money instead flows to multibillion-dollar investments, most often led by men and even oil companies, seeking the “next big technology fix” to the climate change problem.

What Should Come Next?

“Historically, pandemics have forced humans to break with the past and imagine their world anew. This one is no different. It is a portal, a gateway between one world and the next.”

She then joined with Naomi Klein to launch an initiative for a Global Green New Deal.

Upon my return from Norway in January, I was in Denver covering a protest led by a young woman of color, Michelle Weindling, calling for a Green New Deal for Colorado and a Just Transition embracing the state’s rich wind and solar power and an end to oil and gas drilling. The election of Donald Trump had initially left Weindling with a debilitating fear.

Then, in 2018, the United Nations released its most dire warning on the climate crisis to date, giving humans just twelve years to bring down global average temperature rise. Yet, Weindling found hope in the report’s assertion that action today could avert the worst of climate catastrophe tomorrow. When she learned of the youth and female-led Sunrise Movement, she was ready to act.

Sunrise had joined with other groups to demand that candidates take a no fossil fuel money pledge to end “the corrupting influence” of the industry on politics and to release detailed plans for fossil fuels, environmental and climate justice. Former Vice President Joe Biden and Senator Kamala Harris agreed. They even embraced Keep It In the Ground policy, committing to end new leasing for oil and gas drilling on federal lands and waterways.

Sen. Harris went further—as an original co-sponsor of The Green New Deal and pledging to pursue the managed decline of fossil fuel production around the world.

Weindling was arrested for the first time that day. As she was being placed into handcuffs, I was reminded of something she had said to me: “When all of us are pushed to our breaking point and we feel like we cannot breathe, something has to emerge. For us, it is a voice and a path to take action, together. We are acting and we will solve the climate crisis.”

Women and girls are leading the way to the end of the fossil fuel era. Will the rest of us follow?

Antonia Juhasz is an award-winning author and investigative journalist. A frequent Ms. contributor, her bylines include Rolling Stone, Harper’s Magazine, CNN, Newsweek and others. She is the author of three books, most recently, Black Tide: The Devastating Impact of the Gulf Oil Spill. She is a Bertha Fellow in Investigative Journalism. Follow her on Twitter— @AntoniaJuhasz—and learn more at www.AntoniaJuhasz.net. 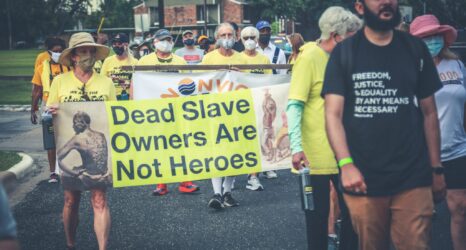