2020 was a waking nightmare for feminists. Early on, it teased us with hope of change with the presidential election in November … only to be hit with the biggest pandemic in the last 100 years. And with the death of Supreme Court justice and feminist legend Ruth Bader Ginsburg, it often felt as if all the gains made in women’s, civil and reproductive rights would be taken away.

With the knowledge of a person who has seen their fair share of dumpster fires in the last five decades, I give you my top feminist WTF moments of the past year.

During her first day on the Hill, single mother and nurse Cori Bush wore a Breonna Taylor mask to deliver a message about her convictions about the BLM movement. Showing their ignorance of the March murder of the 26-year-old Kentucky EMT and subsequent daily protests, some of Bush’s Republican colleagues kept calling her Breonna.

The arrest of Omar Jimenez on live TV

Just after the George Floyd murder in Minneapolis in May, Omar Jimenez, an Afro Latinx reporter from CNN, was arrested along with his camera crew at 6:20 a.m. on live television. Minneapolis PD didn’t give a hoot about his press pass (or the all-white camera crew filming)—to those cops, Jimenez was just another Black male “thug” in a sea of protesters. This was a moment that captured the spirit of 2020: censorship of the media colliding with anti-Blackness, all on live TV.

Reporter Weijia Jiang asks the president why he so frequently claims that the United States is doing “far better than any other country” at COVID-19 testing.

On May 12, President Trump replied to the Chinese American reporter, “Maybe that’s a question you should ask China. Don’t ask me, ask China that question, okay?”

When Jiang asked, “Why are you saying that to me, specifically?” Trump said he would give the same answer to “anybody that asks a nasty question.”

After CNN’s Kaitlan Collins asked a follow up question to back up Jiang, Trump abruptly ended the news conference and walked off. (Trump has also previously targeted Collins in press briefings.)

Unwanted physical contact, humiliation, assault and other forms of abuse are regular occurrences on college campuses—and this year, sexual assault incidents at LSU, UT Austin and beyond were extremely alarming.

With Betsy DeVos’s roll back of Title IX provisions, giving the accused more rights, schools are sending a toxic set of mixed messages to students, faculty and staff alike. The pandemic has been a saving grace in this regard, even though cyber-stalking on college campuses is also a huge problem.

As I continue to adjudicate my own experience with a past employer, I say WTF—because well, when is this going to end?

The Iowa pork plant COVID pool: “Literally gambling on the lives of refugees, immigrants and women”

Seven managers at the Tyson Waterloo Iowa pork processing plant created a betting pool to predict how many workers would contract COVID-19. The health of the plant employees—primarily immigrants, refugees and minority women—was used in a cruel game of gambling by their supervisors.  Overall, 1,000 employees were infected and six died at the plant in Waterloo, according to the Associated Press.

I shouldn’t have to say this, but literally gambling on the lives of refugees, immigrants and women is a terrifying display of white male privilege.

Jessica “La Bombalera” Krug and Kelly Kean Sharpe use Black and Brownface to get ahead in academia.

Krug, the former historian from George Washington University, was forced to resign after she admitted to having pretended to be Afro Latina.

Sharpe pretended to have a paternal grandmother from Mexico. She was outed as being white and resigned from her position as assistant professor of African American history at Furman University.

As an anonymous author asked on Medium, “Why, we must ask, are privileged upper middle-class white women so successful in taking advantage of diversity programs?”

The Trump campaign plays “Macho Man” and “YMCA” by the Village People at his rallies.

Do the Republicans know that “Macho Man” is a gay disco anthem from the 1970s? Hearing that song play while Trump spewed racist, homophobic, science-denying hate was an exercise in confusion and injury. What a bizarre, decontextualized appropriation of songs that are as campy as they can get.

Was there a group behind the scenes setting Trump up to be trolled after these songs were used? This truly is a head-scratcher that makes you say WTF. (But I won’t lie, the possibility of Trump being trolled by his own people with gay anthems certainly gave me some pleasure.)

2020 is the year that keeps on giving, like a bad Hallmark holiday movie that won’t go away. We’re all tired, we’re over-sensitized by the structural violence of the state in its unwillingness and incapacity to create a coordinated response to the coronavirus pandemic, while the Republican puppets call for the presidential election to be conducted again with military enforcement. There are two vaccines now—but we have Amy Coney Barrett on the Supreme Court. Goddess knows what will be in store for us in 2021.

But if you, like us, are in search of a silver lining, I think we can be thankful that this year has thrown into stark relief the structural inequalities that have defined this country since its formation—and hopefully we, as feminists and activists, can turn that awareness into real change in 2021. 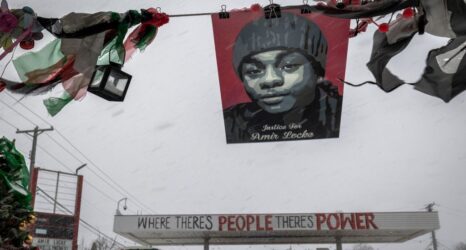 As a Black American, I Am Tired. We Are Tired.

We Deserve Diverse Books: ‘The Right Is Wrong’
Pregnancy as Punishment: The Impact of Abortion Bans on Incarcerated Women and Girls
Oakland Museum of California’s ‘Hella Feminist’ Exhibit Grieves, Celebrates, and Provokes