The Radical Feminist Behind the Curtain - Ms. Magazine
Skip to content

There’s something magical about The Wizard of Oz; it isn’t the witchcraft or the wizardry, but that the story revolves around a girl who realizes her inner strength. For this, you can thank radical feminist Matilda Joslyn Gage.

The Wizard of Oz film, and the novels that inspired it, were deeply influenced by the ideology of radical feminist Matilda Joslyn Gage. Gage may be best known as the mother-in-law of Oz novelist L. Frank Baum, but more importantly, she was an activist, who would be considered as radical in our day as she was in hers. “[Gage was] the woman who was ahead of the women who were ahead of their time,” Gloria Steinem said in Ms.

Amongst her many accomplishments, Gage wrote the first three volumes of The History of Women’s Suffrage, alongside with her contemporaries, Susan B. Anthony and Elizabeth Cady Stanton. Unlike these women, who both opposed the 15th Amendment, Gage sheltered runaway slaves in her childhood and married homes. In her final years, Gage became a treasured ally to local native American tribes, who adopted her as one of their own.

None of this appeared in her New York Times obituary, a mere 205-word write-up stationed below an advertisement for Tiffany & Co., that reads in part, “Mrs. Gage was one of the earliest champions of woman’s rights in America … At age 26, she joined Elizabeth Cady Stanton in suffrage work, and became one of the suffragists’ most effective lecturers.”

Instead, we are told that Gage died at the home of her youngest daughter, “Mrs. L. F. Baum.” Mrs. L. F. Baum, better known as Maud, had defied the expectations of her mother, dropping out of one of Cornell University’s first female classes to marry Baum, then a struggling actor.

As Baum’s biographer Evan I. Schwartz wrote, “Even by the high standards of the world’s most menacing mothers-in-law, she set herself apart … Mrs. Gage railed against religious leaders and politicians for a living and was so controversial and so scary to some that she was deemed ‘an infidel,’ her activities called ‘satanic.”

That Gage is not better known to modern Americans is the result of deliberate actions taken by Anthony to distance the movement from Gage’s radical ideas, namely that the church’s hierarchies were inherently oppressive to women. As historian Sara Egge wrote, “Anthony in particular recognized that claiming her as central to the woman suffrage narrative was too dangerous.”

Gage’s radicalism evidently rubbed off on her son-in-law. According to Schwartz, Baum became the outspoken secretary of his local Equal Suffrage Club, writing in a newspaper editorial, “We must do away with sex prejudice and render equal distinction and reward to brains and ability, no matter whether found in man or woman.”

Baum took inspiration from Gage’s politics, and in turn, she encouraged him to write down the spellbinding stories he told her grandchildren. In one instance, as Schwartz noted, Gage sent her son-in-law a newspaper ad for a story contest, writing on the enclosure, “Now you are a good writer and I advise you to try. Of course, you have but a little time, but ideas may flow.”

In time, Baum would write The Wonderful Wizard of Oz, but in 1893, seven years before his book, Gage published Women, Church and State, a 500-page treatise which detailed why the church’s hierarchies were inherently oppressive to women.

In a lengthy chapter titled “Witchcraft,” Gage argued the church affixed the label “witch” to any “wise, or learned woman,” a practice she traced from the middle ages to puritan Massachusetts.

“What was termed magic, among men, was called witchcraft in woman. The one was rarely, the other invariably, punished,” she wrote.

One of the most excruciating moments in Woman, Church and State is when Gage recounts the history of a 9-year-old English girl forced to testify against her mother, who began screaming after seeing her daughter on the stand. “The judges instead of seeing in this agony a proof of the mother’s innocence looked upon it as an attempt to thwart the ends of justice by demoniac influence.”

The mother had to be forcibly removed from the courtroom before the daughter would continue. Once this occurs, the 9-year-old testified that her mother was a witch and their brown dog, Bill, appeared to her as the devil.

As Woman, Church and State teaches us, the little girl had no other choice. Even worse, American children of “even tender years” were forced to testify against their mothers. If they melted on the stand, they would be imprisoned and almost certainly killed.

The dynamics Gage presented between the church and women are echoed in Baum’s novel. His wizard is an empty God, who convinces Dorothy he can return her to Kansas, if she first kills her fellow woman, the Wicked Witch of the West. In a feminist twist, it is through the help of another woman, Glinda, the Good Witch, that Dorothy gets home.

For this and so many other reasons, you might say that Baum’s Oz is a kind of allegorical take on Woman, Church and State.

In 2021, we must, as the Matilda Joslyn Gage Foundation decrees on its website, finally “bring this vitally important suffragist back to her rightful place in history.” This should extend to her influence on the literary and cinematic masterpieces. As the Wizard of Oz tells the Tin-Man at the end of the film, “A heart is not judged by how much you love, but by how much you are loved by others.”

There’s something magical about The Wizard of Oz; it isn’t the witchcraft or the wizardry, but that the story revolves around a girl who realizes her inner strength. We owe Gage a debt of gratitude for giving us a dynamic heroine to emulate on Halloweens and in our everyday lives.

Jamie Jordan is an MFA candidate at Sarah Lawrence College. Her writing has been published in the San Francisco Chronicle, Sactown Magazine and the Huffington Post. 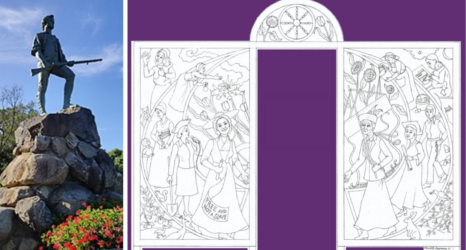