Front and Center: For Danel, Guaranteed Income Will "Make Such a Difference" - Ms. Magazine
Skip to content

I was at work when I got the call that I was picked to be part of the program, And it was April 1st—April Fool’s Day—so I thought it was a joke. So I said, “Are you serious? You’re sure this isn’t a prank?” And they said “No, this is real.”

When I realized it wasn’t a joke, I was excited—but then I was worried about my sister, because I knew she was up for the program too. I have an identical twin sister named Kenya, and we live in the same apartment complex. I just waited for her to call me; I didn’t want to tell her I got it and then have her think there wasn’t hope for her too. But finally, she called me and said, “Did you get in?” and I said yes! Then we were able to be excited together.

We didn’t really talk before about what would’ve happened if one of us got it and the other didn’t. If she had gotten it and I didn’t, I think I would’ve felt some kind of way about it—I’m just telling the truth! But really, we are both super excited about it. It’s going to make such a difference for my kids—I have two, a daughter and a son. My little girl turns three on Thursday, and my son is eight.

Being in this program will help me make sure that my kids have it easier than my sister and I did when we were younger. We both grew up in Jackson, and have lived here our whole lives. We went to a lot of different schools because we were in the foster system—we got taken away from our mom at an early age because my mom turned to drugs after my stepdad died from colon cancer.

It made it easier to have my sister with me in foster care, but I can’t say things were easy. We went through a lot of different foster homes, and for a while we had relatives we were staying with and we thought that would be okay. But they turned out to be abusive. And that was something we’d never experienced before, so that was really confusing because you think “this is family, why are they doing this?” Family should make you feel loved, safe and secure.

In high school, we were in a home with a foster parent that was … well, let’s just say we didn’t like where we were and needed to leave. We were lucky that we had been going to a church and met a woman there who took us in when we were 16 and let us stay with her until we were able to go back home to our mom.

We were away from our mom from when we were 11 until almost 17. We were so happy when we were able to be back with her—our brothers are older and so when we were taken away, we were the only ones who ended up in the system. And it’s just not a place with a lot of hope, you know? We thought we were going to turn 18 in the system—that’s what people look forward to, aging out—so being able to go back home was really a great thing for us.

I work right now as an assistant teacher. I graduated last year from Jackson State with a degree in child care and family education. Since I finished during COVID, there was no ceremony, so they’re letting the graduates from last year walk this year and I’m so excited about it. I’m currently in grad school to get my master’s in teaching. So right now I’m taking my classes, and then I’ll do a year-long internship at a public school, and then I’ll be able to teach on my own and I’ll make a better living with that advanced degree.

Things get tough, but I tell myself I can do things that are extremely hard, because I have accomplished so much that I thought I couldn’t do. I want to own my own day care center in the next two or three years, when my daughter is a little bit older and doesn’t need my help as much. I heard that the community college is doing some free courses over the summer, so I’m going to try and sign up for those. I really want to take some business classes so that I’m ready to open up my own place.

Since I found out a few weeks ago that I’d be getting this money for the year, I’ve been thinking about all the things I can do now. I want to pay off my student loan debt, and move into a house. Right now I live in a two-bedroom with my son and my daughter, and it’s hard to have them share a room, to make that a space they both feel comfortable in.

It’s hard to have my son and my daughter share a room, to make that a space they both feel comfortable in.

Their dad and I split up, but he does his part in helping to take care of them. He’s in the military and right now he’s deployed in D.C., but he checks in on them and calls them. It’s hard on my son especially though; he tends to act out and I think it’s because his dad isn’t physically around right now. I’m hoping that will get better, and it’s one of the reasons I want my kids to go to better schools, to be somewhere safer.

I got my first check a week ago. It came in at 6 a.m., and I went to work and sat at the computer and was at first hesitant to buy anything. But then I realized my graduation was coming up and I didn’t get paid for another few weeks, so I figured, “Okay, let’s just get this out of the way.” I bought my cap and gown for graduation. Then I paid my car note for a few months, and I also made a couple appointments to get my makeup done and my eyebrows tinted for my graduation. I got my outfit for graduation. I was able to get my daughter some gifts for her birthday on Thursday, and order her a birthday cake. So I did some things I needed to do, and I did some things I wanted to do. It felt so great—I wouldn’t have been able to just sit down and take care of those things before.

Growing up the way I did, which was hard, really shaped the way I am—valuing education, working hard. I just want my kids to have a better life than my sister and I did. Sometimes, when I was younger, I had this feeling like I was living in an abandoned house; I don’t ever want them to feel that neglect. I want them to feel loved and to know I’ll always be here for them. I don’t want them to be spoiled or become ungrateful; I just want them to have a better life than I had. That’s why I push myself every single day, no matter how hard it gets.

Have questions on the series? Read more here, and direct specific questions to Katie Fleischer at [email protected].

Danel (pronounced Danielle) is an assistant teacher at HeadStart. 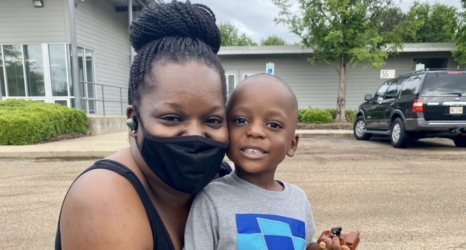 Guaranteed Income As a Path Towards Gender and Racial Justice