Fatherhood Identity Is in Urgent Need of a Feminist Revision - Ms. Magazine
Skip to content

Patriarchy is a problem for everyone—whether you’re a subjugate or a beneficiary. That’s why today’s fathers need to engage in radical feminist self-intervention.

My new book, Father Figure: How to Be a Feminist Dad, considers the way popular images and assumptions about fatherhood are entwined with problematic attitudes around gender, sex, power, aggression, heteronormativity and authority. It shows how bad ideas about dads are deeply embedded in our taken-for-granted beliefs about child development, mature adulthood, marriage and professional success. These ideas may have been useful once, but in the current world they cause more harm than good. Fatherhood identity is in urgent need of a feminist revision.

According to a 2015 Pew report, 57 percent of fathers identify parenting as something “extremely important to their identity.” But the current conception of fatherhood is misaligned with their reality: It fails to provide men with positive aspirational models, meaningful opportunities for reflection, or healthy psychological grounding. Fathers are floundering. Dads don’t know how to imagine themselves without the privileges and entitlements of patriarchy.

As a result, some men have become reactionary. They blame women, mothers and the “identity politics” of elite liberal college professors (like me). They fight political battles against women’s reproductive rights because they unconsciously mistake non-cisgender male bodies as a threat. Of course, the only real threat is a lack of meaningful symbolic grounding, a dearth of father-figure imagery that has been adequately updated to align with the current cultural ethos.

Unfortunately, the ordinary progressive reaction is to demonize the men who use anger and blame to compensate for a sense of uncertainty about the future. Many liberal folks are quick to point out how ridiculous and hypocritical some tough guys can be. I get it; it’s certainly legitimate to dismiss the idea that entitled men might see themselves as victims.

To be clear: I’m not defending them. I know that a credible accusation of sexual violence does not constitute a witch hunt. And I have no desire to justify the loudmouths on Twitter who say “cancel culture” makes it a hard time to be a man. Indeed, it is absurd for men to bemoan losing undeserved privileges in the move toward gender parity—but that doesn’t mean we can’t acknowledge the fact that it always feels disorienting and destabilizing to give up the narratives that add meaning to our lives.

It doesn’t matter whether those narratives are right or wrong, true or false, just or unjust—they still constitute the structural integrity of an individual’s meaning system. And it hurts when old stories crumble.

Stories are crumbling all around us. Consider the cis-hetero nuclear family. We’ve come to imagine it with certain gendered expectations for mothers and fathers. But the binary parenting roles that are so familiar to us are neither essential nor traditional. They were not established until the beginning of capitalism—back when industrial market economies had just begun to replace artisan craftsmen and family farms. At that time, the cold mechanized efficiency of factory manufacturing and the shiny plate glass of high-rise office buildings introduced an earlier era of disorienting social and cultural transformation.

To maintain a sense of psychological stability, people had to somehow make the shift away from an agrarian lifestyle feel “natural.” So, we adopted a sexist origin story about homemakers and hunters, claiming that the new gender roles were a result of biology and evolution. This is where we get the image of barefoot and pregnant housewives, crouched over kitchen stoves, sweeping and scrubbing. Despite what you may have been told, this particular gendered division of labor—dividing us up into nurturers and breadwinners—is a unique invention of modernity.

In the pre-industrial world, food was too scarce to have half the population staying home to tend the hut. Everyone needed to be a provider—hunting, gathering, farming, whatever it took. Sure, dads often went to war, leaving mom alone to fulfill both roles, but it’s not until the 19th century that the workplace becomes predominantly male.

“A homosocial environment,” is what Michael Kimmel, one the leading academic sociologists specializing in men’s studies, calls it. “A male-only world in which he pits himself against other men.” Kimmel is referring to the way the masculine workplace became detached and competitive because the feminine home was seen as altruistic, compassionate and nurturing.

“Self-reliance worked for men because women took care of dependence and obligation,” writes historian Stephanie Coontz. “For both men and women, this meant specialization in one set of behaviors, skills, and feelings at the cost of suppressing others.”

In other words, the industrial workplace was dependent on the repressive, misogynistic, homophobic aggression that’s now called toxic masculinity.

According to a 2019 article in the New York Times, toxic masculinity involves suppressing feelings, masking distress, maintaining a macho appearance of hardness, and using violence to hide vulnerability. The diagnosis was formalized in 2018, when the American Psychological Association (APA) issued its first Guidelines for Psychological Practice with Boys and Men. That document says that men are so afraid of appearing weak or “feminine” that they bury their feelings; they over-conceal. This can lead to mental health issues, cardiovascular problems, substance abuse, violence, incarceration, early mortality and more.

Surely, we’d like to avoid these negative outcomes—but it’s foolish to imagine that toxic masculinity is simply an individual’s psychological problem. No, this is not something we can solve with cathartic drum circles and nature retreats. To think otherwise just reinforces the same old patriarchal narrative of stoic self-reliance. Instead, we need to understand and deconstruct toxic masculinity within the broader economic, professional and familial contexts.

We also need to acknowledge that carelessly abandoning the constrictive personas of Industrial Age manhood poses its own kind of risk. What happens to a man’s sense of self? He can’t discard all the tight, delineating signifiers of masculinity at one time. After all, identity is as much about what one holds in as about what one lets out. Boundaries don’t just limit and constrain; they also provide definition and form. We can’t shed the old symbols without reimagining them in new ways. Otherwise, we’ll leave dads in an especially troublesome bind.

That’s why I imagine Father Figure can also be a first-aid kit for dads who feel like they’ve been wounded as they tried to reconcile their expectations for parenthood, and their identities as mature men, with a culture that’s actively shedding its old patriarchal inclinations.

Many men today find themselves paralyzed as they confront conflicting messages. To go all in on feminism seems to betray the customary good dad story. To go all in on the prevailing good dad story undoubtedly betrays feminism. Even those who make valiant efforts to mediate these tensions often fail to recognize how their unconscious commitment to patriarchal narratives reinforces systemic inequality. They feel whiplashed when their good intentions backfire—so I wanted to show dads how they could be better attuned to the current cultural ethos.

It is certainly unconventional for man to write a book about feminism. But it’s necessary. Patriarchy literally means “rule by the father” (from the ancient Greek πατήρ/pater/father + αρχία/arkhia/rule). Therefore, fatherhood identity tends to show up as the exact opposite of the misogynist propaganda that’s been calcified in so many men’s minds—to be a feminist, so the story goes, is to be an angry, man-hating emasculator.

Of course, it’s not true. Fathers don’t have to hate men to play a different kind of caretaking role in their families’ lives. It’s possible for them to leverage a different kind of parental identity narrative, to fortify a stronger sense of self, and to embrace gender equity and radical inclusivity. In other words, they can be feminist dads.

What is a feminist dad? I prefer the definition of feminism with which bell hooks began her book, Feminism Is for Everybody: Passionate Politics: “Simply put, feminism is a movement to end sexism, sexist exploitation, and oppression.” I like how straightforward this statement is—not complicated, scary or unwelcoming. It also doesn’t suggest a battle between men and women.

Feminism absolutely begins with a forceful criticism of the binary gender–based hierarchy that allocates male privilege, permits dominance and violence, and promotes misogyny and homophobia. But hooks’s definition is open-ended enough to leave room for us to acknowledge that patriarchy can also hurt men. It strips them of certain rights, challenges their self-esteem, and pressures them to adopt sexist identity narratives. Women are not the only victims of sexism, and men are not the sole perpetrators. Patriarchy is a problem for everyone—whether you’re a subjugate or a beneficiary.

Therefore, today’s fathers need to engage in radical feminist self-intervention. They need change their mindsets, temperaments and dispositions. They need to acknowledge how many of the things they do—ordinary, commonplace, run-of-the-mill things—replicate problematic attitudes and strengthen oppressive systems. Of course, I don’t believe that anyone will be able to eradicate a lifetime’s worth of sexist, patriarchal thought patterns just by reading my book. After all, feminism is not a fixed solution to a static problem. Instead, it’s a variable tool that gives you the ability to make intentional anti-sexist and gender-sensitive choices in dynamic, ever-changing contexts.

I wrote Father Figure to show men how to use it, and in the process, I tried to offer an aspirational image of a new kind of father figure, a model for dads who are desperately trying to navigate their way through a world of changing narratives.

Jordan Shapiro, PhD, is father to two children and stepfather to two more. He teaches in Temple University’s Intellectual Heritage Program. He’s senior fellow for the Joan Ganz Cooney Center at Sesame Workshop, and nonresident fellow in the Center for Universal Education at the Brookings Institution. His book Father Figure: How to Be a Feminist Dad is available now. 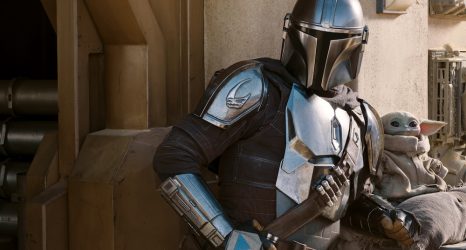 The Mandalorian’s Lessons on Paid Leave for Men 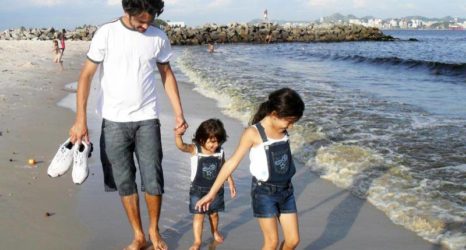 The State of the World’s Fathers