The Mandalorian’s Lessons on Paid Leave for Men - Ms. Magazine
Skip to content

The Mandalorian unapologetically shows how badass it is to be a caregiver.

In these final weeks of waiting for our second child to be born, my husband and I have taken up what might be called a “tradition” leading to the birth of our kids: We decompress from the hectic planning that precedes a new baby by watching Star Wars.

Days before our first child, Julian, was born in 2016, we bought tickets to see Star Wars: The Force Awakens. We were thrilled to discover that the baby was a natural supporter of The Resistance, since he kicked harder than I’d ever felt every time Rey, Finn and Poe soared into battle.

This time around with our second child on the way, picking the Star Wars franchise back up was a natural choice. And so, a few weeks ago we started watching The Mandalorian, albeit more than a year after all the hype, but hey, we’re parents—that’s how it goes. Cooing over Baby Yoda, after all, seemed like an appropriate thing to do while expecting a new infant of our own.

But as it turned out, Baby Yoda was not what stole my attention. Rather, it was the radical portrayal of the show’s hero, the Mandalorian, in a paternal caregiving arc that strengthened over the show’s two seasons. Now this, I thought to myself, was something worth talking about.

Not only is the United States the only industrialized country without a national paid family and medical leave program, but when paid parental leave is available for employees, men are still not taking it. According to a 2020 LinkedIn survey, while 92 percent of women said they were comfortable taking all of their paid parental leave when they have a child, only 71 percent of men felt the same way, with the majority saying that it was because their industries expected men to take less time off.

Every time a man says no to paternal leave—or takes minimal time off under pressure to work—it puts an inequitable onus on women in the company to also take less leave or (equally harmful) positions them as the more “appropriate” and “natural” caregiver of the sexes. Both outcomes perpetuate inequality and doubly harm working women.

What’s more, according to public opinion research The Opportunity Agenda conducted in 2020, fewer than half of those polled strongly favored paid leave for new fathers (or new foster parents).

This is why characters portrayals such as the Mandalorian are so important: Whether it was passing up on beers with his team to clean up Baby Yoda vomit, struggling to find “child care” for Baby Yoda before embarking on especially dangerous bounty hunts, or—well—the entire show’s plotline hinging on the Mandalorian’s natural desire to take care of “the child” and protect it, our hero unapologetically shows how badass it is to be a caregiver.

Not only does Mando exemplify how men can play an essential role in caregiving, but he pushes the narrative to look beyond the mother/father binary. The Mandalorian is not related to Baby Yoda. He is a caregiver by choice—an adoptive father perhaps, or even an “uncle figure.” In the campaign for equitable paid family and medical leave for all, this is critical.

Many of us have “chosen family”—people in our lives, though not officially related, who are there to take care of us. In order to truly have paid leave for all, national policy must be inclusive of “chosen family.” This is especially important for the LGBTQ community, where chosen family is often more commonplace. I hope that society at large will start recognizing not only the importance of ensuring that anyone who needs to take time off to care for a loved one has the paid ability to do so, but that men should be seen as equals in caregiving, alongside women. We say that we recognize this, but our actions show otherwise.

In order to move forward, as in so many cases, we must dismantle the gender binary. Caregiving does not come down to gender. Caregiving is human. In fact, as “The Mandalorian” so beautifully shows us, caregiving goes even beyond being human. It is universal.

How to Build On the Generation Equality Forum 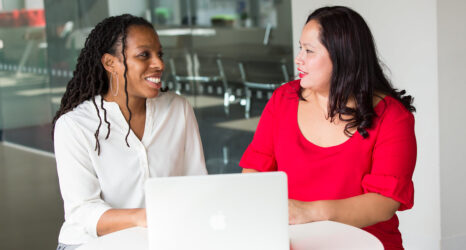 We Keep Hearing About The Labor Shortage. How’s That Working Out For Women Over 40?

Women Athletes Are Still Being Disrespected—On and off the Field
Women in Academic Medicine Wait for Our #MeToo Moment
What Not to Do When Making a Women-Led Action Film: ‘Gunpowder Milkshake’ as Cautionary Tale