“Given the attacks on abortion in Texas and across the country, it’s more important than ever that patients can access their choice of birth control and other healthcare through Title X—and that it is easily available.”

“The end of the Title X gag rule is a major victory for patients, access to sexual and reproductive healthcare and health equity,” said Alexis McGill Johnson, president and CEO of Planned Parenthood Federation of America. “Title X is a critical piece of our social safety net that can, and should, ensure that people with low incomes can access essential healthcare without forcing providers to withhold referrals for all of the options available to them. Given the attacks on abortion in Texas and across the country, it’s more important than ever that patients can access their choice of birth control and other healthcare through Title X—and that it is easily available.”

“After years of fighting back against the Trump administration’s cruel gag rule, I’m so relieved that today it’s finally gone,” said Sen. Patty Murray (D-Wash.), chair of the Senate Health, Education, Labor and Pensions (HELP) Committee. “Now, our Title X family planning program can once again function in the way it’s meant to—by providing patients with birth control, STI screenings and cancer screenings that keep them healthy, and by informing them about all their options, including their right to abortion. This new rule will make all the difference for millions of patients across the country, who will once again be able to get the reproductive healthcare they need from the providers they trust, including Planned Parenthood.”

The Supreme Court in 1991 upheld the domestic gag rule in Rust v. Sullivan, but Bill Clinton’s administration reversed the policy in 1993 and ever since Congress has required Title X recipients provide pregnant women with “neutral, factual information and non-directive counseling.”

In March of 2019, the Trump administration defied Congress’s mandate of neutral, non-directive counseling by issuing a gag rule that prohibited health centers that receive Title X funds from informing pregnant patients of all their options. Trump required Title X providers—in violation of their medical and ethical responsibilities—to refer women directly to prenatal care, regardless of their intentions for the pregnancy.

The gag rule outright blocked the availability of Title X funds to family planning providers that also offered abortion care, such as Planned Parenthood, and encouraged participation by “nontraditional” organizations. In fact, the Trump administration granted $1.7 million in Title X funding to the coercive Obria Medical Clinics, a Christian, antiabortion organization that opposes hormonal birth control and other contraceptives and offers training in the unreliable rhythm method.

The rule was quickly challenged in court in multiple suits by the National Family Planning & Reproductive Health Association (NFPRHA), Planned Parenthood and other providers, 21 states and the District of Columbia, the American Medical Association and numerous women’s rights organizations.

Federal district court judges in California, Oregon, Washington and Maryland temporarily blocked the rule, but the U.S. Courts of Appeal for the 4th and 9th Circuits reversed the lower courts’ temporary injunctions and allowed the rule to go into effect while the cases are pending. On July 15, 2019, the Trump administration began enforcing its gag rule, giving clinics until August 19 to decide whether to comply with the rules or forgo funding.

Six states rejected Title X under the Trump administration’s terms. Some states, such as Massachusetts, covered the shortfall from their own budgets. Many Title X clinics, including Planned Parenthood, withdrew from the program. The number of clinics receiving Title X funding fell by nearly 1,000, from 3,954 in 2018 to 3,031 in 2020. 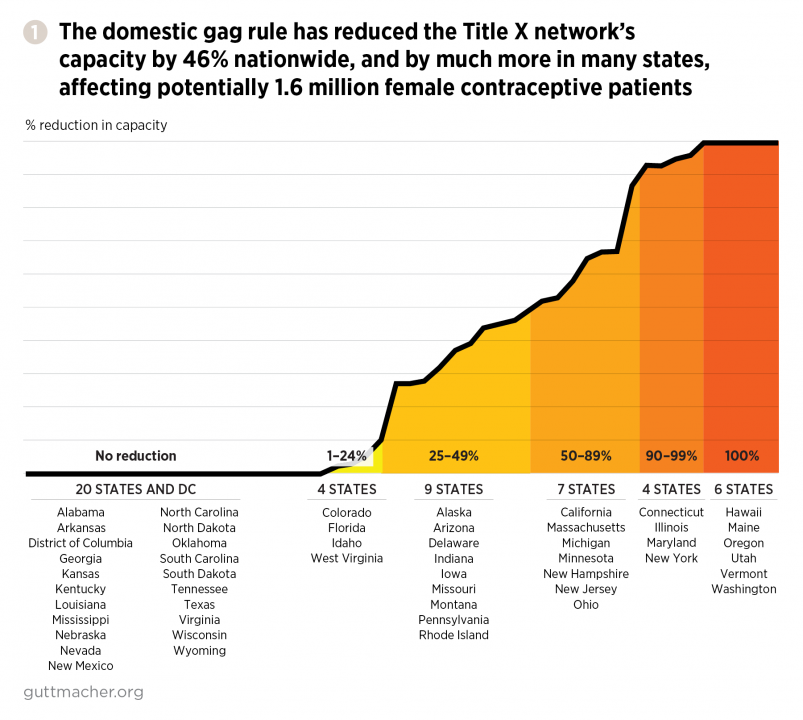 The effect on patients was devastating. The Trump Administration’s gag rule slashed the Title X-funded healthcare network’s capacity by nearly half, compromising the healthcare of millions of patients nationwide—disproportionately women of color, young women and low-income women—who rely on Title X health centers for reproductive healthcare.

After the Trump gag rule went into effect, the number of clients served by the Title X program dropped 61 percent, from approximately 4 million in 2018 to 1.5 million in 2020. HHS’s Office of Population Affairs estimates 63 percent of the drop (1.5 million patients) was due to the Trump rule, while the other 37 percent was due to the COVID-19 pandemic.

On January 28, 2021, shortly after taking office, President Biden signed a presidential memorandum directing HHS to review the Title X gag rule and consider whether to suspend, revise or rescind them.

Then on April 14, 2021, HHS announced a proposed rule to restore Title X back to its previous structure, stating the Trump-era regulations “have undermined the public health of the population the program is meant to serve.”

Finally, on October 4, HHS issued its final rule, to take effect on November 8.

While reproductive healthcare advocates celebrated the reversal of the Trump gag rule, Planned Parenthood’s McGill Johnson criticized the new rule for still allowing “objecting individuals and grantees” in the program not to counsel or refer patients for abortions due to their own personal beliefs.

“Due to centuries of systemic inequities that have blocked access to healthcare and economic advancement, Title X disproportionately serves Black and Latino patients and people living in rural communities. These communities deserve access to comprehensive, accurate medical information and care,” said McGill Johnson.

The Guttmacher Institute called on the Biden administration to do more to repair the damage inflicted on the Title X program.

“Like other critical healthcare programs dismantled for ideological reasons by the previous administration, it will take an extraordinary amount of time, work, and expertise to rebuild capacity lost under the Trump administration’s agenda,” said Ruth Dawson, Guttmacher Institute’s principal policy associate.

Biden’s American Rescue Plan included $50 million in supplemental funding for Title X, and in July the House of Representatives passed its fiscal year 2022 package with $400 million for Title X, a $113.5 million increase from current levels and the largest increase in funding in the history of the program. This budget still has to pass the Senate and be signed by the President.

On Monday, the Democratic Women’s Caucus (DWC) issued a statement in support of the new Title X rule.

“We applaud the Biden-Harris administration for taking the first big step to ensure that all people in this country have access to essential family planning services,” said DWC co-chairs Reps. Jackie Speier (D-Calif.), Lois Frankel (D-Fla.) and Brenda Lawrence (D-Mich.), and vice chairs Reps. Veronica Escobar (D-Texas) and Sylvia Garcia (D-Texas). “All patients deserve accurate and comprehensive information about their health options, regardless of their provider’s personal beliefs or politicians’ agendas—plain and simple.”

President Biden Condemns Supreme Court Decision: ‘This Is Not Over … Roe Is on the Ballot’