The World According to Justin Bieber - Ms. Magazine
Skip to content 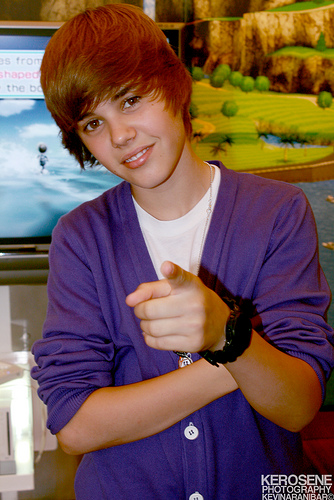 It’s official–Bieber fever is sweeping the nation. Sixteen-year-old pop phenomenon Justin Bieber has won the hearts of tween America. His fans’ devotion knows no bounds: He’s been a top twitter trender for months, his appearances are so crowded that his manager has been arrested for endangering frenzied fans and Bieber fanatics are becoming stars in their own right:

To the young, impressionable girls who idolize Bieber, he represents the ideal boyfriend, and his music contains the narratives that will likely inform their beliefs about gender roles.

The songs on Bieber’s new #1 album, My World 2.0, will become the soundtrack for countless young girls’ imagined heterosexual romances. They’ll also mold their expectations of boys and men and their perceptions about girls and women. So what exactly are they learning from the Bieb? Let’s take a look at some of his lyrics.

In his biggest hit yet, “Baby,” Bieber laments the loss of his first love:

For you, I would have done whatever

And I just can’t believe we ain’t together

And I wanna play it cool, but I’m losin’ you

Translation: If you devastate a guy enough, you might be able to get him to buy you things. Maybe even a ring! Bribing a girl with jewelry is the biggest compliment a guy can give. It’s also his last resort.

He goes on to sing:

And I’m in pieces, baby fix me

Translation: Guys are incapable of dealing with feelings. Fixing bad feelings is what girls are for, but remember to leverage that power for jewelry if you can.

Beiber entices listeners with his promises in “Love Me“:

Baby you can do no wrong

My money is yours,

give you a little more because I love ya, love ya

With me girl, is where you belong, just stay right here

Translation: You know you’ve got it made when your boyfriend says stuff like “You’re with me now, so don’t go anywhere, and here’s some money. Actually, I’m gonna throw you an extra twenty just for the hell of it, but stay where I can see you!” This guy’s a keeper.

Bieber’s charms are in full effect in “Kiss and Tell“:

Like you a fly chick, you could be my chick

Play by the rules and you can get what I give …

Use them lips for kissing, girl

If you wanna ride with me

Translation: Relationships are kind of like jobs, and the guy is like the boss. If you impress him, he’ll hire you. All you have to do is play by his rules and you’ll be compensated. And if he wants to kiss you, you should let him, otherwise he’ll probably make you get out of his car.

On perhaps the most intimate track of all, “First Dance,” Bieber asks his date to do him a very special honor:

If you just give give the first dance to me

Girl I promise I’ll be gentle

But we gotta do it slowly

If you give give the first dance to me

Cuz it only happens once once in a lifetime

Translation: This song is not about dancing, but if you’re still too young to realize that then just go with it. If you’re not, remember that your virginity is a gift that you give, and you should choose a guy that is trying really hard to talk you into giving it to him.

Even though Justin Bieber’s is the squeaky-clean face of these messages, they are scripted by those who write his music and brand his image–producers, songwriters, publicists, stylists, even a “swagger coach“. In his Slate review of My World 2.0, Jonah Weiner imagines how Bieber’s mentor, R&B titan Usher, and his manager must have constructed the Bieber package:

What does the typical girl in a shrieking teen-pop fan base really want? She wants, they decide, to stare at a poster of her crush with such loving intensity that he comes to life, steps down off her bedroom wall…and whisks her away… Bieber as the Canadian Prince Charming.

Weiner is right to suggest that Bieber’s music is strategically targeted at girls. However, I think it’s time we stopped pretending that these are the messages that young girls want to receive. In fact, these are the messages that are being sold to them, products of a male-dominated mainstream music industry. Girls listen to Justin Bieber because they like the sound of his music, they think he’s cute and perhaps most importantly because all their friends do. Not because the messages in his songs give hope to their dreams of someday finding the guy that will give their life meaning.