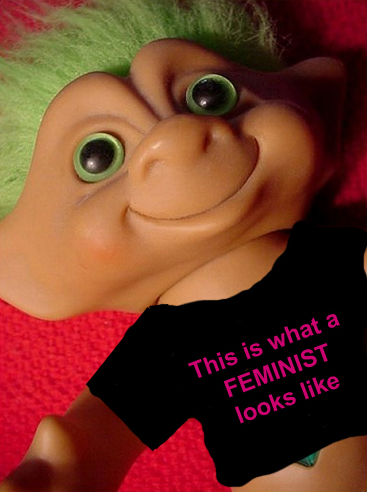 The world of dating-while-feminist can be a challenge. For me, it is a prerequisite that my potential date identifies as a feminist, or at least is interested and can hold a conversation about feminist subjects. I also subscribe to ye olde adage “Just say no to sex with anti-choicers.” These prerequisites can make it difficult to find a contender. As Jaclyn Friedman puts it, “If I had a hardcore litmus test, the pool of men I could date would be so tiny. And then when you weeded out men who are gay, the men I don’t find attractive, the men already in monogamous, committed relationships—really, I would never get laid again.”

I recently pondered, “Can’t someone invent a feminist dating service? What would happen if men I tried to date knew up-front that I’m a feminist and were glad to hear it?” So I posted a Craigslist personals W4M ad to test my theory, which consisted of this: 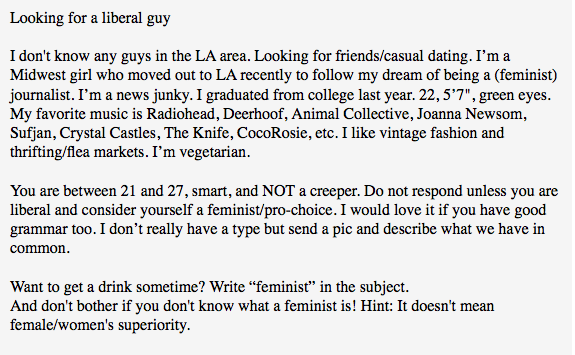 Honestly, I didn’t really expect to find any good candidates, but I figured putting the word “liberal”  in the headline might deter any unwanted conservatives/freaks and was pleasantly surprised by the outcome.

Out of 68 replies, only four were spam, two included pictures of penises, and two or three were anti-feminist:

Real men do no like left wing feminists. Just saying.

Feminists killed Marriage and Trust between men and women. That’s why there’s so many divorces and single parents in the western world.

I hope this one was a joke:

I hope you wrote that ad from the kitchen, where you belong.

Some were frankly honest:

Hi,
Liked your ad.
But first things first, I may be what you consider a creeper.  I’m 45.  But I don’t act my age or look it.  It’s not my expectation you’ll jump in bed with me, or possibly ever be more than friends, but I liked your ad and would at least like to try talking?

Um, no. But thanks for the warning, dude.

Others said they were feminist but obviously didn’t understand what it meant:

I am a single white college educated 27 year old male who is a strong believer in Female Surpremacy [sic] and Feminism.  I love everything about it.

This one may have been the creepiest:

I am 27 with 4 sisters and was always last in evertything [sic] next to them, youngest of 5 kids. I have been conditioned to know ladies are always right and mostly guys are just jerkoffs, i like ladies that share this opinion.

And then it went on to say some other creepy things about pleasuring himself while talking about women being better than men.

There was even a conservative anti-choice reply:

I know I’m not “your type” or what-have-you, that being because I’m a Republican who doesn’t support abortion, I think we’d get along pretty well because I have a better understanding of where you’re coming from than those other nasty Conservatives.

Astonishingly, the majority of replies actually sounded sincere and sweet. There are real men on Craigslist who like indie bands, are vegetarian, have good grammar and identify themselves as feminist. Who knew? I’ll talk more about them in my next post.

What are your tactics for dating while feminist? Do you have criteria?

Above: Craigslist trolls will say anything. Photo courtesy of http://www.flickr.com/photos/eraphernalia_vintage/ / CC BY-SA 2.0