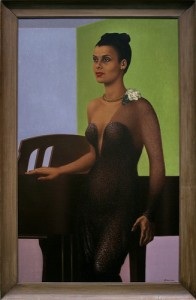 “You have to be taught to be second class; you’re not born that way”, is just one of the many Lena Horne aphorisms that traversed through social networking sites yesterday at the news of the pioneer’s passing. President Barack Obama, Bill Cosby, Janet Jackson and millions of citizens across the globe felt the weight of her loss.  It’s a curious sensation when a path-making, fully realized icon dies: There is profound sadness, but also a feeling of pride and gratitude in celebrating someone who broke down or through barriers, achieving greatness despite the hatred, precariousness and racial/gender discrimination of the time.

A Brooklyn girl, Lena Calhoun Horne was born on June 30, 1917 to Teddy and Edna Horne. Her father left the family when Lena was 3, and she was raised middle-class by her mother and grandparents with a progressive, activist aesthetic. Her paternal grandparents were early members of the NAACP, Lena becoming a member herself at the tender age of 2. At 16, Lena’s mother took her out of school to audition for the chorus at the Cotton Club in Harlem, beginning her historic career. Lena Horne became the first Black performer to sign a long-term Hollywood studio contract. Though a major personal and community milestone, she nonetheless faced incredible racism for much of her career. Many of her cinematic scenes were segregated from those featuring the white stars, so that the studio could edit her out when the films played in the South. Her second marriage to a white man, Lennie Hayton, presented new challenges for the star, Horne keeping it secret for three years and then enduring additional prejudice because of their interracial union.

One of Lena Horne’s most significant contributions was her fierce activism and passion for civil rights. A friend of fellow entertainers/activists such as Paul Robeson, Horne was blacklisted for seven years in the 1950s because of her insistence on “rocking the boat” over issues of race in Hollywood and beyond. Horne was also vocal on the colorism that, in part, informed her success and made her palpable and marketable to white audiences (and some Black ones). Max Factor developed an “Egyptian” makeup for her at the beginning of her career, and at one point MGM tried to sell her as a Latina or an “exotic”–but she would assume no other identity than that of a Black woman. As she candidly said,

I was unique in that I was a kind of black that white people could accept. I was their daydream. I had the worst kind of acceptance, because it was never for how great I was or what I contributed. It was because of the way I looked.

Lena Horne’s last film role was as Glinda the Good Witch in The Wiz (1978), and from there she continued to forge a remarkable later-life career in music and Broadway, becoming forever known for such timeless hits as “Stormy Weather” (see video below). At age 80, Lena said,