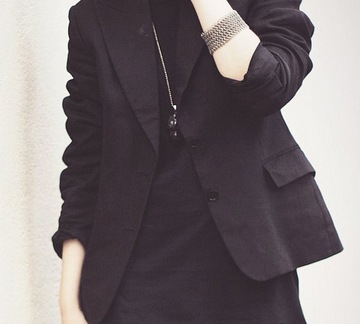 Hey everyone! Guess what Friday is? If you guessed that it is Abortion Blackout Day, you’re totally right. Yes, the war against abortion continues, but this time it’s a sartorial decree: Wear black on Friday if you’re anti-choice!

I have misgivings about the entire Abortion Blackout Day website (not only because the statistics they show are- surprise!- misleading) but because the video engages in the anti-choice movement’s latest tactic, race baiting.

Recently, anti-choice rhetoric has zeroed in on a statistic which shows that a slight majority of abortions in 2006 were performed on black women. Georgia Right to Life has teamed up with the Radiance Foundation to produce billboards which read “Black Children are an Endangered Species.” Despite the billboards claims, the message is blatantly untrue, with the Centers for Disease Control reporting that the fertility rate among African-American women remains the highest in the country.

The president of the Radiance Foundation, Ryan Bomberger, told The New York Times, “This is not a campaign that targets black women, it’s a campaign that exposes an industry that we believe targets African-Americans.” Anti-choice advocates like Bomberger say Margaret Sanger, the founder of Planned Parenthood, specifically encouraged African Americans to abort. A documentary, written and produced by Mark Crutcher traces connections, in the most Glenn Beckian of fashions, between slavery, eugenics, Nazis and abortions.

Abortion Blackout is part of the newest pro-life strategy which insinuates that both abortion and Planned Parenthood are racist. According to their website, most women who have abortions are minorities and don’t live in poverty. This seems a pretty easy evasion of responsibility, and it’s a total misrepresentation of the facts. As I wrote here, the Guttmacher Institute estimated that 42 percent of women who had an abortion in 2008 had incomes below the poverty line. Minority women are also more likely to live in poverty; according to a recent study by Insight, the average wealth of an African American woman is $5.
So, the greater issue here is not that Planned Parenthood targets minority communities. It doesn’t. The greater issue is poverty and the fact that African American women are, overall, the poorest group in the U.S. today and, in this economy, getting poorer. As Loretta Ross, executive director of Sistersong Women of Color Reproductive Health Collective said, “Controlling…fertility was part of our uplift out of poverty strategy, and it still works.”
Cross-posted from This Week in Lady News.
ABOVE: Photo from Flickr user Idren / CC 2.0.
Email
Share
Tweet
Pin
Share
Flip
Tagged: Abortion Access, Anti-Abortion Extremism, Black Women, Racial Justice, Reproductive Justice
Email
Share
Tweet
Pin
Share
Flip