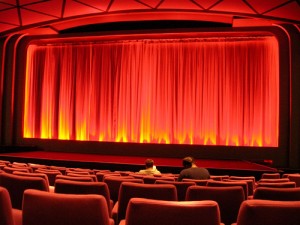 I am a playwright living in Los Angeles. Am I an oxymoron, or just a regular moron? Everybody knows that Los Angeles is a movie town! In spite of this, through great good fortune all of my plays have been produced, and I have nothing to complain about.

When we hear a feminist voice coming from a stage, it moves ideas around in our heads; if the voices we hear onstage come exclusively from the dominant straight-white-male perspective, we may as well return to our caves, clubs in hand and enjoy a nice dinner of berries and worms.

Theater is the oldest form of communal storytelling. Yet playwright Theresa Rebeck has been known to speak of its exclusivity:

She asserted that over the last 25 years, women have written between 12 and 17 percent of plays produced. In two thousand years since Greek men first made plays, women have advanced a crummy 12 per cent–this makes me want to set my hair on fire!

In New York, theater is a billion-dollar industry. Tourists from all over the world go to New York and most of them will see a play. These plays obviously matter–millions watch and hear the stories being told from stages on Broadway and off. They carry these stories home in their psyches; stories form our collective sense of what it is to be alive and human. When are women going to be heard?

Our voices are necessary and women make up a majority of the theater-going public. So why are women so underrepresented? Why are most of the plays produced in New York written by men? Especially British men. Does the Y chromosome, voiced with a British accent, have some magical effect on the audience that will cause them to run out and fix the Gulf oil disaster, end the tragedy of war or stop domestic violence? No.

(Please read Winter Miller’s article from New York Magazine about playwright Lynn Nottage. She wrote “Ruined,” a Pulitzer Prize-winning play about rape in the Congo that still couldn’t get a Broadway production. Her play will be at the Geffen Theater in Los Angeles this season).

Do women and men tell stories differently? See relationships differently? See women differently? According to trends in American theater, you’d have to ask David Mamet, Neil Simon or Sam Shephard. Wait! Before you start screaming at me, let me say that these men all write well–but so do a lot of other people who don’t scratch their beards, cash their checks and sit complacent in the knowledge that certain forms of the Old World and the Old Rules are totally intact. At least in theater.

So yes, it matters that women and minorities and the LGBT community be represented on stage. We can’t assume that every woman playwright will be a feminist, but until we allow women their rightful portion of the theatrical pie, we’re denying our culture tasty and valuable voices.

I know some humdinger, brilliant women playwrights on both coasts. All of them have been produced, but deserve bigger and more frequent productions. So here’s my (very partial) list:

Deb Margolin, has won an OBIE for continually excellent work. Not easy to do. Let’s see more of her please!

Now go see a play by a woman!

UPDATE: HELP US WITH OUR LIST: Please add, in the COMMENT box, the names of professional women in theater who deserve a shout-out! They can be directors, dramaturgs, designers, playwrights, choreographers, producers, etc. If we want to extol the virtues of women making theater, let’s do so RIGHT HERE on the MS. BLOG!