The Manly Spokesmen Are Winking - Ms. Magazine
Skip to content 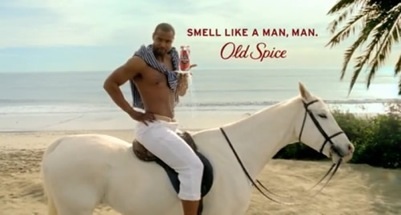 First, it was Dos Equis Beer’s “Most Interesting Man in the World.” The commercials show him on all sorts of adventures–dashing, wise, magnetic. “People hang on his every word,” the narrator intones–“even the prepositions.” Having awed you, the MIMitW notes: “I don’t always drink beer, but when I do I prefer Dos Equis.”

By now I have heard the MIMitW voiceover excerpted on a morning radio show and quoted by friends, so the commercial has succeeded in becoming a cultural phenomenon.

Joining him is the Old Spice Guy. Apparently he’s been around since the 2010 Super Bowl, but I just became aware of him on July 13 when he had a very big day on Twitter.

In the same vein as the Dos Equis campaign, Old Spice described an early commercial in this campaign with: “We’re not saying this body wash will make your man into a romantic millionaire jet fighter pilot, but we are insinuating it.”

Both of these commercial campaigns, these spokespeople, are winking at the viewer in two ways. First of all, they are acknowledging that commercials typically make outrageous claims about the product, often via an authoritative hunk. The commercials are self-referential and self-deprecating: ironic and postmodern in a way commercials never were a generation ago. 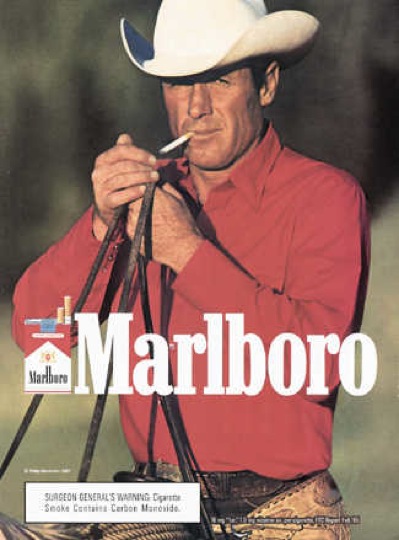 The second wink is about masculinity. The MIMitW and the Old Spice Guy are such over-the-top caricatures of masculinity–dazzlingly capable, handsome, dominating but suave, the rugged individual beloved by women and men alike–that they are a joke. Some feminists felt the same way about the iconic Marlboro Man, but the difference is that instead of being the unsuspecting target of our laughter, these spokesmen are in on the joke.

I like the sendup of masculinity here. And I like the racial-ethnic implication: As opposed to the all-white spokesmen of the Marlboro generation, Old Spice Guy is African-American and the Most Interesting Man in the World has a hint of an accent to make me wonder if he is Latino.

However, as we enjoy the joke with these likable spokesmen, I must caution you: The commercials in effect say, “Isn’t it silly how we pull stunts to get you to buy our product? Silly, but still–buy it.” And many of us do, literally, buy it. The same goes for media messages that acknowledge the torment of the beauty imperative, but still insist that you buy into it and buy it.

And although they are winking about masculinity, they are still making profitable use of it. The whole point of the Old Spice campaign was to introduce body wash for men, because the body washes that have come before were too girly. The spokesman initially implored the viewer, “Smell like a man, man.” Old Spice Guy promises heterosexual couples a romantic boost if the man uses this body wash. The commercials are half joking, of course, but that means they are half serious.

If I were a spokesperson, I would be reminding viewers that anyone and everyone can enjoy the same beer and the same liquid soap (and razor and shampoo and so on) if they want to, and that heterosexual romance is irrelevant to these products. No joke. That would be more radical–but less profitable.