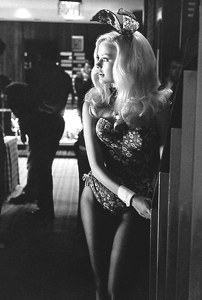 Yes, Hefner did fight for an end to sexual repression and racial segregation–all while dating, photographing and ultimately codifying the image of the blonde, blue-eyed, buxom Playboy Bunny and centerfold. Thus the Bunny became the building block of an empire defined by sexual and aesthetic homogeneity, not diversity.

King’s interview is complete with a slideshow of Hugh throughout the ages, but apparently the show’s producers couldn’t dig up enough photos of Hefner with his African American friends, or even his man-chums: The mogul is surrounded by an all-white crowd of adoring Playboy bunnies in each photo.

How did Hef respond when King brought up his magazine’s counterproductive influence on the women’s movement? “It takes a very curious attitude towards Playboy to come up with that conclusion,” Hefner maintained. “The notion that our sexuality— the fact that we are attracted to the opposite sex, that there are two sexes on the planet—is a blessing, and its something I think we ought to celebrate.” Certainly. But sexuality doesn’t have to take the form of bunny ears.