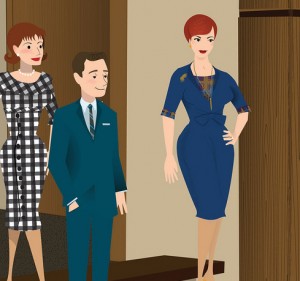 Mad Men’s fourth season premiered last night and I didn’t want the episode to end. The show is still immersive, fresh and charmingly unpredictable. And even though Mad Men’s feminism has always been ambivalent–a trend that seems to be holding in this season–this ambivalence feels right and even necessary, especially considering the era in which it’s set.

In the latest issue of Ms. magazine, I write that Mad Men straddles the line between a nuanced portrayal of how sexism and patriarchal entitlement shape lives, careers and social interactions in the 1960s (and, by extension, today) and a glorified rendering of the “fast-paced, chauvinistic world of 1960s advertising and all that comes with it.” Season three ended with a sea change on several levels: Don (Jon Hamm), Roger (John Slattery) and Cooper (Robert Morse) leave their well-established advertising agency to start a new one from scratch; Betty (January Jones) flies to Reno to finalize her divorce from Don so she can remarry; Peggy (Elisabeth Moss) takes a stand against Don and his rampant superiority complex so her work will be acknowledged on its own merit; and Joan (Christina Hendricks) comes back to work after a short and unfulfilling stint as a housewife. Season three’s finale left the show’s women characters on a precipice, poised to come into their own.

In the first episode of season four, its a year later, and everything’s somehow both the same and yet very different. The upstart new agency Sterling Cooper Draper Pryce now resides in an office building, but they’re still small and struggling to keep clients away from the bigger companies. As the season opens, the agency is being strained by Don’s unwillingness to talk about himself to the press, his antisocial tendencies leading to complications for the firm. Meanwhile, Peggy and Pete (Vincent Kartheiser) resort to some questionable, though entertaining, shenanigans to save one of their accounts and keep the fledgling agency’s head above water.

As for the women in the show, here’s the breakdown: Joan, the vivacious office manager who knows how to use both her sexuality and her intelligence to impressive effect, now has her own office, but it’s hard to say what season four will hold for her beyond that since she doesn’t play much of a role in the season’s first episode. I wouldn’t be too concerned, however: Mad Men’s ensemble cast and complicated storylines don’t allow for every character to have pride of place in every episode.

Betty, now a self-involved new wife, is completely absorbed in her new husband and fed up with her children. She has never been a terribly likable character, which is one of the things that makes her compelling–she’s so wrapped up in her own fantasies and so constrained by societal expectations that even in moments of liberation it feels like she’s missing the point. There’s already an interesting tension emerging between Betty and her oldest child, Sally, who clearly resents her mother and is acting out in ways that could either starkly highlight the complex contradictions of Betty’s trapped, neurotic existence or finally bring about awareness of her own limitations and self-sabotage.

Peggy’s debut this season made me fall in love with her and the show all over again. From the moment she appears on the screen, she’s cool, confident and charming, casually joking with junior staffer Joey (Matt Long), an artist who clearly works for her. Even though Peggy finds herself forced to seek Don’s help and apologize to him for a risky promotional stunt that could have gone horribly awry, moments later she unabashedly chides him for his recent belligerence at the office–subtly reminding him that he has a role to play if he wants the agency to be success. Peggy’s still the same hardworking idealist as in seasons past, but now she’s a true colleague of the men and women with whom she works. She seems freer, more comfortable in her own skin, and unquestionably in control.

The episode left with me feeling captivated and wanting more; I can’t predict what’s going to happen next, and that’s a hallmark of great TV. In fact, Don describes the potential of Mad Men’s new season best when he explains the success of his Glo-Coat Floor Wax television campaign to a reporter: “I wanted it to be indistinguishable from the movies,” he boasts. “I wanted people to be watching it and say, ‘What’s happening in the story right now? Oh! It’s something else.’” That’s what I have always loved about Mad Men: Every time you ask “What’s happening right now?” there’s always something else.

To read Aviva Dove-Viebahn’s longer essay on Mad Men, look for Ms. magazine on your newsstand or join the Ms. community and have the new issue delivered to your doorstep!