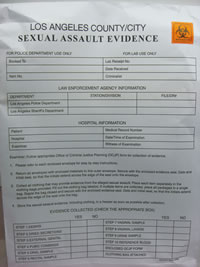 Over 400,000 rape kits sit untested in refrigerators around the U.S. Any clues they may hold to rapists’ identities remain buried. But if the SAFER Act passes, the situation could drastically change.

Yesterday, Rep. Carolyn Maloney (D-N.Y.) and Rep. Ted Poe (R-Texas) introduced a bill that would fund audits of unprocessed rape kits in cities and towns across the country. The Act would also mandate a national web-based registry of evidence collected from the rape kits, allowing survivors to easily track the status of their cases.

Law enforcement agencies cannot process kits fast enough, and as a result, rapists are walking free … Justice requires diligence and it is my hope that this legislation will increase the efforts of law enforcement divisions throughout the country as they seek to serve their communities and apprehend, and convict, those who commit these despicable crimes.

The Sexual Assault Forensic Evidence Registry (SAFER) Act would provide funding for local crime labs to hire and train new employees to deal specifically with rape kits. State attorney generals would be required to report the best practices for use of the rape kit data.

A rape kit is a package of potential evidence collected from a sexual assault survivor by a hospital or clinic following an assault. The survivor must report the assault to the doctor or nurse, recount the incident and endure what can be a traumatic four-to-six-hour examination. However the DNA collected, and other visual evidence noted by physicians, such as bruising or tearing–if any occurs, which it often does not–is stored in the rape kit and can be used to find and prosecute an attacker, if tested before the statute of limitations runs out.

Despite the passage of the Debbie Smith DNA Backlog Grant Program, which provided $43 million to state crime labs in 2007 to review untested DNA, the rape kit backlog persists. According to Rep. Maloney, other crime scene DNA is usually processed within hours. But some rape kits, which contain DNA that could lead to the prosecution of an offender, sometimes go untouched for 10 years–exceeding the statue of limitations.

The SAFER Act provides a strong foundation for the resolution of hundreds of thousands of sexual assaults in the U.S. Let’s push for its passage!