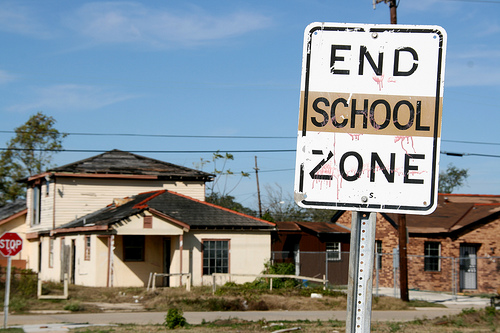 On the eve of the fifth anniversary of Hurricane Katrina, we decided to travel to New Orleans to volunteer at the Lower Ninth Ward Village Community Center. We were visiting New Orleans for the third time after having written a book that included a chapter on how historical memory was unleashed during the hurricane and afterwards. Five years later, we were still impressed by the resilience of the many women displaced by the storm.

As we sat at a table passing out questionnaires to members of the community center, asking them what kinds of services they would like, we saw that most of the women coming through the doors were eager to talk to us.  Many returned to the neighborhood a few months after the hurricane. Others had come back recently. Others were just visiting from Houston. They talked about how so many of the older people from New Orleans were heartbroken, unable to return to their beloved city. Some died lonely and disengaged, others drank themselves to death.

One woman spoke with concern about the disruption of her family and the emergence of generational conflicts since Katrina. She and her grown daughter had both been relocated to Houston for five years, but only she had returned. Even though they had wanted to stay together, the daughter and her two children had remained in Houston because there was only one charter school in New Orleans and it was over-enrolled, with more than 400 students on the waiting list. The daughter was also hesitant about the New Orleans public schools in part because her son had been misidentified as needing medication. Now the grandmother and her daughter were separated, lonely for each other and yet seeing no way for all of them return. Another woman talked about how the young people don’t have a sense yet of how important it is to have roots. They think they might have more opportunities away from New Orleans, away from home.

Even if they are able to come home, women are facing barriers to repairing their homes and holding onto their mortgages. Historically, many women got their homes through informal inheritance: Grandmother will leave it to granddaughter, who will leave it to a cousin, who will leave it her daughter. But along the way no one is certain what happened to the deed. Without that piece of paper “proving” ownership, it is difficult for women to get access to loans and other resources to be able to fix up their houses. Most women don’t have the financial backing they need to hire lawyers to fight for the right to their property.

Most of the talk in the community center among the men is about repairing the homes and bringing industry into the area. They see the center as a place to engage in discussion about next steps that will ensure that the infrastructure of the community returns.  But on rainy days, sad days, hard days, the women need places for respite, community and relaxation. As the talk about rebuilding communities continues, whether it is in Iraq or Afghanistan or New Orleans, somehow we need to keep women in mind, letting the rhythms of their days and the worries on their faces help guide the plans.