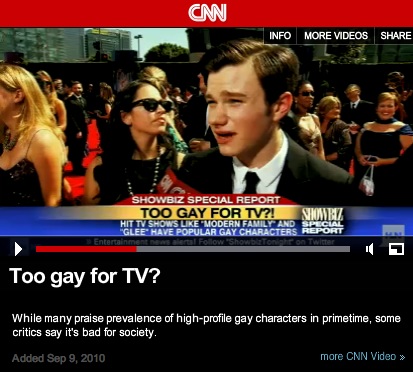 CNN is the most trusted name in news. So it’s no surprise that they devoted an entire segment to covering the big debate going on in America over whether or not gay characters on TV shows are “bad for society”. Now if only they would address the question of whether or not Jesus votes Republican.

At The Frisky, Jessica Wakeman gives a good analysis of the controversial story of Ines Sainz, the Mexican reporter who was sexually harassed by New York Jets players and staff when she entered the team’s locker room.

An extremely disturbing report from Black Looks: Every other day a transperson is reported murdered.

If you needed one more reason to hate Goldman Sachs, you are anomalous–and in luck! The Guardian reports on the recent lurid allegations of sex discrimination against one of Wall Street’s most odious banks.

Research from linguist Dr. Paul Baker on changes in the use of gendered language over time indicates that, slowly, we are headed in the right direction. Check out the data at Sociological Images.

From Colorlines: Elle’s response to the extensive criticism they’ve received over their decision to significantly lighten Gabourey Sidibe’s skin color for their 25th Anniversary cover.

And finally, via Culture Kitchen, Lady Gaga’s message to the Senate asking them to vote to repeal Don’t Ask, Don’t Tell next Tuesday.

Above: Screenshot of CNN’s report on gay TV characters and whether or not they’re bad for America.