Gay Bashing is About Masculinity - Ms. Magazine
Skip to content 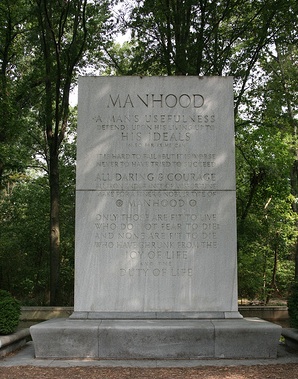 The tragic suicide of Rutgers freshman Tyler Clementi has led to a wave of national hand-wringing anguish about the daily torture and humiliations suffered by young gays and lesbians. An article in The New York Times expanded the conversation to include the stories of several other gay teens who recently committed suicide, such as Seth Walsh of Fresno, CA, who endured a “relentless barrage of taunting, bullying and other abuse at the hands of his peers.” Walsh hanged himself last month–at age 13.

Yet, in our collective search for explanations and solutions we’ve missed one salient fact. Here are the names of the teenagers in The Times article: Tyler Clementi, Seth Walsh, Billy Lucas, Asher Brown. Notice anything?

Writing that gay “teens” suffer such relentless abuse or bullying obscures as much as it reveals. It’s not “teens.” It’s boys.

Yes, lesbian teens can be relentlessly tormented, harassed and bullied in school. They can be mercilessly taunted in cyberspace, and shunned in real space. But the amount of rage they inspire rarely compares to that experienced by boys.

And that’s not because of the current fad of faux-lesbianism among teenage girls. Sure, it’s true that many teen girls have “kissed a girl” and “liked it,” as Katy Perry proclaims. But there is something fundamental about male homosexuality that elicits what psychologists call “homosexual panic,” and a near-hysterical effort to circle the wagons and get rid of the perceived threat.

For my book Guyland I interviewed nearly 400 young people all across the country. I found that many of America’s high schools have become gauntlets through which students must pass every day. Bullies roam the halls, targeting the most vulnerable or isolated, beating them up, destroying their homework, shoving them into lockers, dunking their heads in toilets or just relentlessly mocking them. It’s all done in public–on playgrounds, bathrooms, hallways, even in class. And the other kids either laugh and encourage it or scurry to the walls, hoping to remain invisible so that they won’t become the next target. For many, just being noticed for being “uncool” or “weird” is a great fear.

Why are some students targeted? Because they’re gay or even “seem” gay, which may be just as disastrous for a teenage boy. After all, the most common put down in American high schools today is “that’s so gay,” or calling someone a “fag.” It refers to anything and everything: what kind of sneakers you have on, what you’re eating for lunch, some comment you made in class, who your friends are or what sports team you like. The average high school student in Des Moines hears an anti-gay comment every seven minutes, and teachers intervene only about 3 percent of the time. After spending a year in a California high school, one sociologist titled her ethnographic account Dude, You’re a Fag.

It’s true that gays and lesbians are far more often the target of hostility than their straight peers. But it’s often true that anti-gay sentiments are only partly related to sexual orientation. Calling someone gay or a fag has become so universal that it’s become synonymous with dumb, stupid or wrong.

And it’s “dumb” or “wrong”  because it isn’t masculine enough. To the “that’s-so-gay” chorus, homosexuality is about gender nonconformity, not being a “real man,” and so anti-gay sentiments become a shorthand method of gender policing. One survey found that most American boys would rather be punched in the face than called gay. Tell a guy that what he is doing or wearing is “gay,” and the gender police have just written him a ticket. If he persists, they might have to lock him up.

Many guys think being gay means not being a guy. That’s the choice: gay or guy. In a study by Human Rights Watch, heterosexual students consistently reported that the targets were simply boys who were un-athletic, dressed nicely, or were bookish and shy.

Take the case of Jesse Montgomery, who filed a Title IX suit in the Minnesota courts after suffering 11 years of verbal and physical abuse. Jesse was treated to a daily verbal barrage of “faggot,” “queer,” “homo,” “gay,” “girl,” “princess,” “fairy,” “freak,” “bitch,” “pansy” and more. He was regularly punched, kicked, tripped. Some of the torment was directly sexual:

One of the students grabbed his own genitals while squeezing [Jesse’s] buttocks and on other occasions would stand behind [him] and grind his penis in [Jesse’s] backside.

By the way, Jesse Montgomery is straight.

So, too, was Dylan Theno, an 18-year-old former student at Tonganoxie High School in Kansas. Beginning in the 7th grade, he was consistently taunted as “flamer,” “faggot” and “masturbator boy,” harassed daily in the lunchroom and on the playground. Teachers looked the other way or laughed along with the harassers. Why? Dylan explained:

Because I was a different kid, you know, I wasn’t the alpha male. … I had different hair than everybody else; I wore earrings … I wasn’t a big time sports guy at school.

Of course, if you actually are gay, the harassment is relentless–and often dismissed entirely by the adults in charge or, worse, considered appropriate. Take the case of Jamie Nabozny in the mid-1990s. Beginning in middle school, he was harassed, spit on, urinated on, called a “fag” by a teacher and mock-raped while at least 20 other students looked on and laughed. Each time the school principals and teachers shrugged off his complaints, telling Jamie that he should “expect” this sort of treatment if he’s gay and that, well, “Boys will be boys.”

Nabozny successfully sued the school district and the principals of both his middle school and the high school, who paid out close to $1 million in damages. His lawsuit opened a door for those who are the targets of bullying and harassment in school, because school districts and administrators may be held liable if they do not intervene effectively to stop the abuse.

But gender non-conforming boys still need protection–not just from the bullies but from the teachers, parents, administrators and community members who look the other way, at best, or collude with it.

Most Americans find explicit racist and anti-Semitic behavior unacceptable, an affront to their moral sensibilities. Racism and anti-Semitism are out of bounds even when they don’t become physical, and most of us believe that those who openly express those sentiments should be severely punished.  Why is the same not true of gay bashing?

Do We Hail Yale, Or Are The Men There Just (Bull)Dogs?