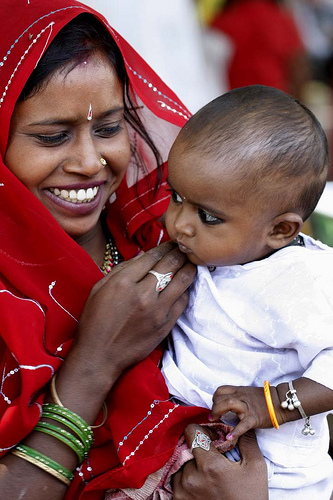 INDIA: With Millennium Development Goal #5 as its target, India announced a multi-million dollar welfare program to improve the country’s maternal mortality rate. According to UNICEF’s data from 2005, one in every 70 Indian women will die from pregnancy or labor-related problems–approximately 1,000 women each day.

The new initiative pays pregnant women 12,000 rupees ($270) over six months, provided that they attend regular health check-ups and keep their vaccinations current. More than one million women will receive this bonus and the rupees will be transferred directly into their bank accounts.

UGANDA: In less progressive news, a Ugandan newspaper published a front page article listing the names of the nation’s “top” 100 gay and lesbians citizens two weeks ago. Above the list was the headline “Hang Them.”

Since the story ran, several of those listed have been attacked, including one woman whose house was stoned by neighbors. The newspaper article comes just before the one-year anniversary of the introduction of the controversial anti-homosexuality legislation, which so far has not passed, that would sentence homosexual “repeat offenders” to life in prison or death. Even though the U.S. government opposed the bill, there is evidence that U.S.-based Christian conservative groups encouraged its creation.

DEMOCRATIC REPUBLIC OF THE CONGO: Thousands of Congolese women took to the streets in the town of Bukavu on Sunday, protesting sexual violence and the lack of government action. Many held signs proclaiming “No to Sexual Terrorism.” During 15 years of conflict, rape has been used as a weapon of war by all sides.

Nene Rukunghu, a doctor at Bukavu’s hospital, said the march was intended both to demand punishment and to show the world the resilience of Congolese women:

We must fight against impunity, so that the perpetrators of violence are punished, to allow women to regain their dignity. Despite what they endure, Congolese women are strong and able to stand up again.

POLAND: An increasing number of Polish women are heading to Germany for abortions, reported German newspaper Der Spiegel on Wednesday. Since the fall of the Soviet Union in 1989, Polish women have endured the most restrictive abortion laws in Europe, making the procedure permissible only if the mother’s life is in danger, the fetus is irrevocably deformed or the woman was raped. According to Der Spiegel, this law is increasingly out of touch with Polish culture, leading more and more women to cross the border into Germany to take control of their reproductive lives.

MEXICO: “La mujer mas valiente de Mexico” (the bravest woman in Mexico), according to El Pais, assumed her post last week as the new police chief of a small Mexican town near Ciudad Juarez. Twenty-year-old Marisol Valles Garcia, a recent mother and current criminology student at a local college, told the BBC that her goals are to alleviate the town citizen’s fear and to focus on community policing.

Given the current situation of the Chihuahua region, which has seen some of the deadliest cartel violence, Valles Garcia has her work cut out for her. Her first task? Reestablishing the authority of a position that has remained vacant for more than a year after the former police chief’s decapitated head was dumped in front of the town’s police station. Yet Valles Garcia is uncowed by the danger. She has refused bodyguards because they will separate her from the town’s citizens and told The Guardian, “I am frightened, I am only human, but you have to learn to trust and to have hope that things can change.”

It’s Time to End Discrimination in Crash Testing
Everything You Need to Know About Birth Control (Even Things Your *Doctor* Might Not Know)
Rest in Power: Urvashi Vaid, the Queer Movement’s Legendary Firebrand