Talking Up Choice on the Streets and Campuses - Ms. Magazine
Skip to content 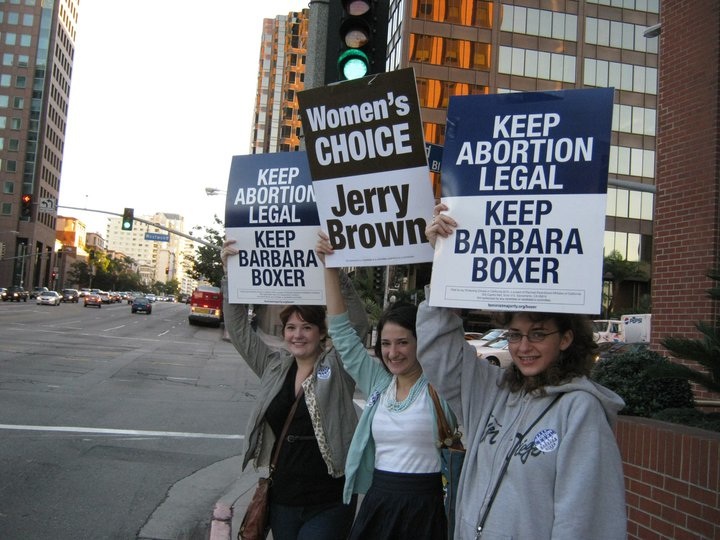 On Election Day, bright and early at 7 a.m. (usually the time I hit the snooze button for another 20 minutes of sleep), I was already on the corner of Westwood and Wilshire Blvds. in Los Angeles volunteering for the Feminist Majority’s Pro-Choice Students for Barbara Boxer Campaign. Along with three others, we held signs high and handed out literature as cars and pedestrians passed by. (An estimated 110,000 cars go through that intersection daily; I don’t think you can get much more visible than that).

I had never volunteered on a campaign before. I’ve worn pins, stickers or t-shirts advertising my candidate of choice, but never actually hit the streets or the phones for a candidate. But working on this campaign for pro-choice candidates–including longtime California Senator Boxer–has been one of the most  enlightening experiences I have participated in.

The Feminist Majority brought its independent expenditure campaign to more than 20 college campuses across California, organizing teams at 76 polling locations with 57 campus-based field organizers and hundreds of student volunteers. At polling places on election day, student voters got a good look at such signs as “Keep Abortion Legal / Keep Barbara Boxer.” Before election day, Pro-Choice Students for Boxer organized a number of attention-getting events, including hanging thousands of coat hangers in high-traffic areas to remind voters of a time before abortion was legalized.

At the corner of Westwood and Wilshire we received a lot of support: People honked and waved, including a number of L.A. bus drivers. Occasionally, we had a finger wagged at us. Fortunately, it wouldn’t be long before another nice bus driver waved.

At 10 a.m., Kathleen Richter and I were deployed to the nearby UCLA campus, where we were joined by UCLA student volunteers who spent every hour they weren’t in class doing last-minute campaigning. Stationed between two polling places for the next 8 hours, Kathleen and I handed out voting cards and stickers and answered questions. The students were mostly receptive; we didn’t receive any more insults and even carried on some lively conversations. When students asked why we were voting for Boxer, we explained, “She’s a fighter for women’s rights and abortion rights, cares about GLBTQ marriage and the environment and the DREAM Act.” It was quite rewarding when they indicated that Boxer had won their votes. The student vote is critical, and who students vote for can have a critical impact on their futures.

By the end of the day I was exhausted, but glad that I put my beliefs into action. Barbara Boxer (and Jerry Brown!) won in California, and I’m convinced that the Pro-Choice Students for Boxer campaign had impacted those positive results. We have a lot of work ahead of us to gain and maintain women’s rights, and now I know the power that my own effort–combined with those of others–can have.

Thanks to the amazing team of campaign organizers, field organizers and volunteers behind Pro-Choice Students for Boxer for all their hard work.