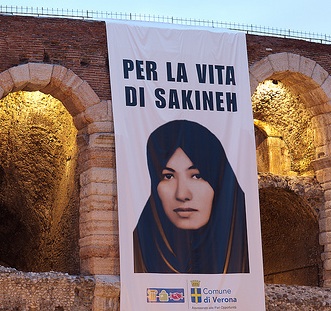 Never before has the cruelty of Iranian criminal justice system been more evident than now. The International Committee Against Stoning reported Monday that the Iranian government has given the go-ahead for Sakineh Mohammadi Ashtiani to be executed for adultery. At the same time, Nasrin Sotoudeh–a prominent human rights lawyer incarcerated in Iran’s notorious Evin prison–has begun a dry hunger strike.

Both women are mothers, Sotoudeh’s young children being just 3 and 11 years old. An esteemed human rights lawyer and colleague of Shirin Ebadi, Nobel Peace prize winner in 2003, Sotoudeh has a remarkable record of defending women, children, minorities and political dissidents. She has been in prison since September 2010 on the charges of on charges of “disturbing social order” and endangering “national security,” where she has been barred from seeing her children. Her hunger strike is to protest widespread violations of prisoners’ rights.

Ashtiani has been in prison since 2007 on charges of adultery. Her daughter and son (now also imprisoned without the right to a lawyer) started an international campaign that has created a wave of protest against her sentence of death by stoning. The Iranian authorities have denied the sentencing on numerous occasions, but Ashtiani is in prison in Tabriz–an Iranian province–and it is not uncommon for provincial judges to carry out sentences independently of orders from the capital.

Based on Sharia law, the criminal code in Iran is one of the cruelest and most discriminatory legal codes in the world today. Stealing, adultery and minor misdemeanors carry harsh punishments. Cutting off hands or fingers, and death by stoning or flogging, are among the sentences carried out.

Furthermore, the criminal code is discriminatory against women as well as religious and ethnic minorities. Women and minorities are not considered full individuals with rights; rather, the judiciary–in most cases–legally endorses violence against them.

But that is just part of the story. The Islamic Republic of Iran is also based on two important principles: immense respect for the status of motherhood and the Islamic mandate of forgiveness exercised by pious Muslims in their everyday lives. Widows of the soldiers who fought in the Iran-Iraq war were among the first women to claim their rights, in the mid-1980s. These widows made the judicial system acknowledge mothers’ rights to custody of their children and the right to inheritance.

As the health of Sotoudeh deteriorates in prison and Ashtiani faces imminent execution, the international community can and should demand real justice–be it Islamic or otherwise.

You can also sign this Gender Equality for Iran petition to release Nasrin Sotoudeh.