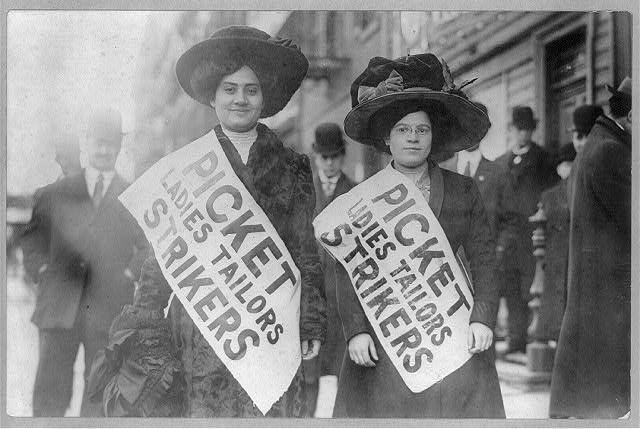 March 7, 1910: The accomplishments of tens of thousands of women who took part in the recently ended strike against New York City’s shirtwaist (blouse) manufacturers were celebrated tonight at the annual meeting of the Women’s Trade Union League.

Helen Marot summed up the gains that had been made since last year’s walkouts and discussed future efforts to expand the union movement and women’s participation in it. There are now signed contracts with more than 300 firms, granting the shorter 52-hour work weeks demanded, increased pay, better sanitary conditions and recognition of committees of workers in the shops. In addition, all of the former strikers, including the leaders, are now working again, so no one is unemployed due to having exercised their right to protest.

Meaningful gains such as these are now causing women in all the trades to think about unionizing. Future organizing may be among corset makers, hat rimmers, children’s jacket-makers and “white goods” workers. A more immediate and pleasant task, however, is promoting the firms who made the most favorable settlements. The two who now put union labels on their goods will get the biggest boost. The union has ambitious plans for empowering the workers: They will be giving classes in English to new immigrants as well as lessons in debating and singing. Debating skills will come in handy for mass meetings or negotiating with employers, and the singing of union songs will help with bonding.

The union battle began with a strike call last September by Local 25 of the International Ladies Garment Workers’ Union (ILGWU) against the Triangle Shirtwaist Company, arguably the worst employer in an industry infamous for its abuses. It’s common in many garment shops for employees to be required to furnish their own needles, thread, knives, irons and other sewing necessities, and also to be charged for use of company equipment, from clothing lockers to chairs, and be fined for even the briefest tardiness or the slightest flaws in their work. But among the additional daily degradations inflicted on employees at Triangle are a lack of indoor bathrooms, and the requirement to ask a foreman to unlock a steel door to leave the building for this universal necessity.

All the nearly 1,000 employees answered the call and went on strike, and the action went citywide on November 22 thanks to Clara Lemlich. At a mass meeting of shirtwaist workers called by the ILGWU, the young woman demanded the opportunity to speak as well. Her impassioned recounting, in Yiddish, of the daily exploitations and frustrations encountered by she and her fellow workers stirred the audience to enthusiastically support her unprecedented call for a general strike against all shirtwaist manufacturers.

More than 20,000 of the city’s 32,000 shirtwaist workers walked off their jobs the next day, with as many as 10,000 more joining them later. Their struggle over the next three months, though extremely trying, has paid off. A number of things were accomplished even beyond the wage and hour settlements. Though at first picketers had to contend with violence from strikebreaking thugs hired by the companies, as well as arrests by the NYPD, public sympathy for the workers caused Mayor William J. Gaynor to end the policy of arresting pickets and ignoring violence against them.

ILGWU Local 25 has now increased its membership from 100 members to 10,000. The Women’s Trade Union League has also gained a number of valuable supporters, including 11 volunteer lawyers, 13 writers, 31 speakers and nine wealthy women such as Anne Morgan and suffragist Alva Belmont, prepared to do whatever may be needed. Victory is far from complete, as not all shops have signed agreements and Triangle is still a major holdout. But the battle for workers’ rights–and women’s rights–will go on, energized by these hard-won triumphs.