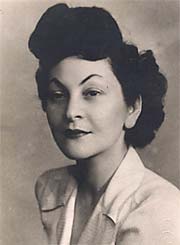 March 12, 1954: Doria Shafik, founder and president of the Daughters of the Nile Party, announced today in Cairo that she would be undertaking a fast to protest women’s exclusion from the elections for a Constituent Assembly to draft changes to the Egyptian Constitution. She has sent telegrams to Maj. Gen. Muhammad Naguib, president and premier, as well as members of the ruling junta, and the nation’s religious and political leaders. In her message she said:

I have taken a firm resolution to go on a hunger strike until my last breath, or until Egyptian women attain their constitutional rights, and without conditions. I demand that the women of Egypt be admitted to the Constituent Assembly. I demand their admission because we are convinced that the women who form more than half the Egyptian nation must not, at any cost, be governed by a Constitution in the making of which they played no part.

At her strike headquarters in the Cairo Press Syndicate, she reiterated her pledge:

I am going to fast until I get a written promise from someone in authority that under the new constitution women will have the same political rights as men.

One of the proposals under consideration would bar women from holding office and would grant suffrage to women only as individuals and only if their request was approved by the government.

This is not Doria Shafik’s first protest. On February 19, 1951, she and nearly 1,500 women were meeting at the American University. She declared that:

Our meeting today is not a congress, but a parliament. A true one! That of women! We are half the nation! We represent here the hope and despair of this most important half of the nation. Luckily we are meeting at the same hour and in the same part of town as the parliament of the other half of the nation. They are assembled a few steps away from us. I propose we go there, strong in the knowledge of our rights and tell the deputies and senators that their assemblies are illegal so long as our representatives are excluded, that the Egyptian parliament cannot be a true reflection of the entire nation until women are admitted. Let’s go and give it to them straight. Let’s go and demand our rights. Forward to the parliament!

After a four-hour demonstration inside the building’s gates, she was given an assurance from the president of the Senate that the demands of the women would be taken up by parliament. These demands were for permission to participate in politics, limitations on polygamy and divorce and equal pay for equal work. The politicians soon went back on their promise, however, and she was arrested for her rebellion. But support for her was so strong that when her trial opened, it was quickly adjourned and “postponed,” never to resume again.

She continued to fight for women’s equality despite provoking great hostility from religious leaders, with political leaders eventually following their lead. Following the revolution which deposed the monarchy, she formed the Daughters of the Nile political party, which was recognized by the Ministry of the Interior and held its first convention on December 11, 1952.

But the new military regime has since proved to be no more sympathetic to women’s equality than the old king and parliament, and so it is time to protest again. Doria Shafik, born in 1908, has studied at the Sorbonne, where she wrote her doctoral dissertation on “Egyptian Women and Islam.” Upon her return to Egypt in 1945, she founded the magazine Daughters of the Nile, which eventually included a section on political issues. In 1948 she founded the Daughters of the Nile Union, which focuses on literacy and political rights for the country’s women.

FOLLOW-UP : On March 18, Doria Shafik and several other hunger strikers who joined her were forcibly moved to a hospital, but still refused to break their fast. They ended their strike the next day when President Naguib promised that their demands would be put before the Constitutional Committee. The new constitution was promulgated on January 16, 1956. Political parties were abolished and voting was made mandatory for men, but women had to apply to vote or run for office and pass a literacy test not demanded of men.

In February, 1957, her outspoken demands for freedom for all Egyptians and equality for women caused the full might of the Gamel Abdel Nasser regime, which succeeded Naguib, to begin to descend upon her. In July 1957 police entered the offices of Daughters of the Nile magazine, seized all issues and destroyed Shafik’s private papers. All publications by her were then confiscated and banned by the government, her name was prohibited from being mentioned in the press, and she was placed under house arrest. She would remain there until her suicide in 1975.

But the struggle for freedom for all Egyptians and equality for Egyptian women goes on with renewed vigor–as shown by the revolt of 2011.