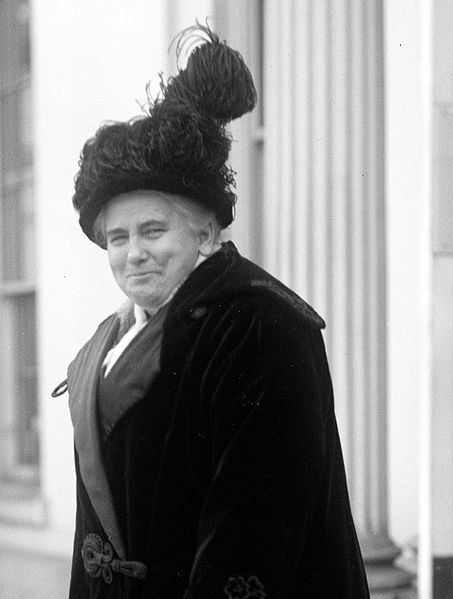 March 15, 1912: Suffragists in both New York and Philadelphia let it be known today that they are not to be trifled with.

The first example occurred at the Woman’s Industrial Exhibition in the new Grand Central Palace in New York City, where the New York State Woman Suffrage Association battled for booth space. Yesterday at 3 p.m., Emma Ivins noticed that among all the exhibitions there was no booth devoted to woman suffrage, and decided to remedy this. She quickly signed a contract, picked up a plentiful supply of literature, banners and signs, and by 6 p.m. the “Votes for Women” booth was doing a brisk business.

But not for long. This morning, Frances Lang was setting up when workers came in, returned Ivins’ check, began taking down the signs and told Lang that she could no longer distribute literature. This incensed her, and many of the women in adjoining booths as well. Mary Dreier, president of the Women’s Trade Union League, and a woman in the Woman’s Insurance Company booth asked for suffrage banners, while a number of others put on yellow “Votes for Women” sashes and marched around the auditorium.

This irritated the exhibition’s officials, who had guards tell the women to either remove their sashes or return to the suffrage booth. They did neither, and simply turned the sashes into ties. Josephine Dodge, noted antisuffrage leader and a vice president of the exhibition, confronted the now-unsanctioned suffrage booth’s staffers, accusing them of getting in under false names, which was not the case. This only escalated the conflict, as women in other booths now defiantly pledged that if the suffragists were ejected, they would leave too. The entire stock of yellow sashes quickly disappeared from the suffrage booth and were soon found prominently displayed by women all over the hall.

Just as the tensions were peaking, there was a stunning turnaround by the exhibition authorities. The New York State Woman Suffrage Association had gotten a judge to issue an injunction prohibiting the exhibition from ousting them, and not long after the management quickly reassured everyone that this had all been a “misunderstanding” due to an initial ruling by the board that the show would be “nonpolitical.” Workers then returned to the suffrage booth, this time carefully putting up the banners and signs they had confiscated just hours before.

Meanwhile, in Philadelphia, Rev. Anna Howard Shaw, president of the National American Woman Suffrage Association, reiterated a call she made last night to an audience at the New Century Club that the time has come for greater militance. She said today that her remarks were not made in the heat of the moment, and she is willing to stand by her speech on “Militant Suffrage for America.” She is displeased with the way she had been treated in Washington, D.C. and justified more assertive tactics by saying:

If we are played with, made fun of, just tolerated, greeted with supercilious smiles by members of Congressional committees, there is nothing for us to do but to resort to militant methods. We hope we will not be driven to measures as severe as those used in England, but, if it does come, the daughters of old English sires will be ready to suffer here as women are suffering in England.

Speaking of England, in London yesterday hunger-strikers Emmeline and Sylvia Pankhurst were released from Holloway Jail due to their deteriorating physical condition. Other militants used hammers to smash windows in the Home Secretary’s residence, succeeding in breaking every pane of glass on the ground floor. All were arrested, and sentenced to two months’ imprisonment with hard labor.

And back in the U.S. the day before yesterday, suffragists from around the nation went to Washington, D.C., to testify before Congressional committees in favor of the Susan B. Anthony Amendment, which would enfranchise women nationally. Rev. Shaw was in charge of the forces at the Senate hearing, which was attended by members of both the Woman Suffrage and Judiciary Committees. In the House, the Judiciary Committee heard from a number of witnesses, Jane Addams being the most prominent. She said that the care and protection of children was becoming a matter of government control, and that women should therefore have a voice in the government.