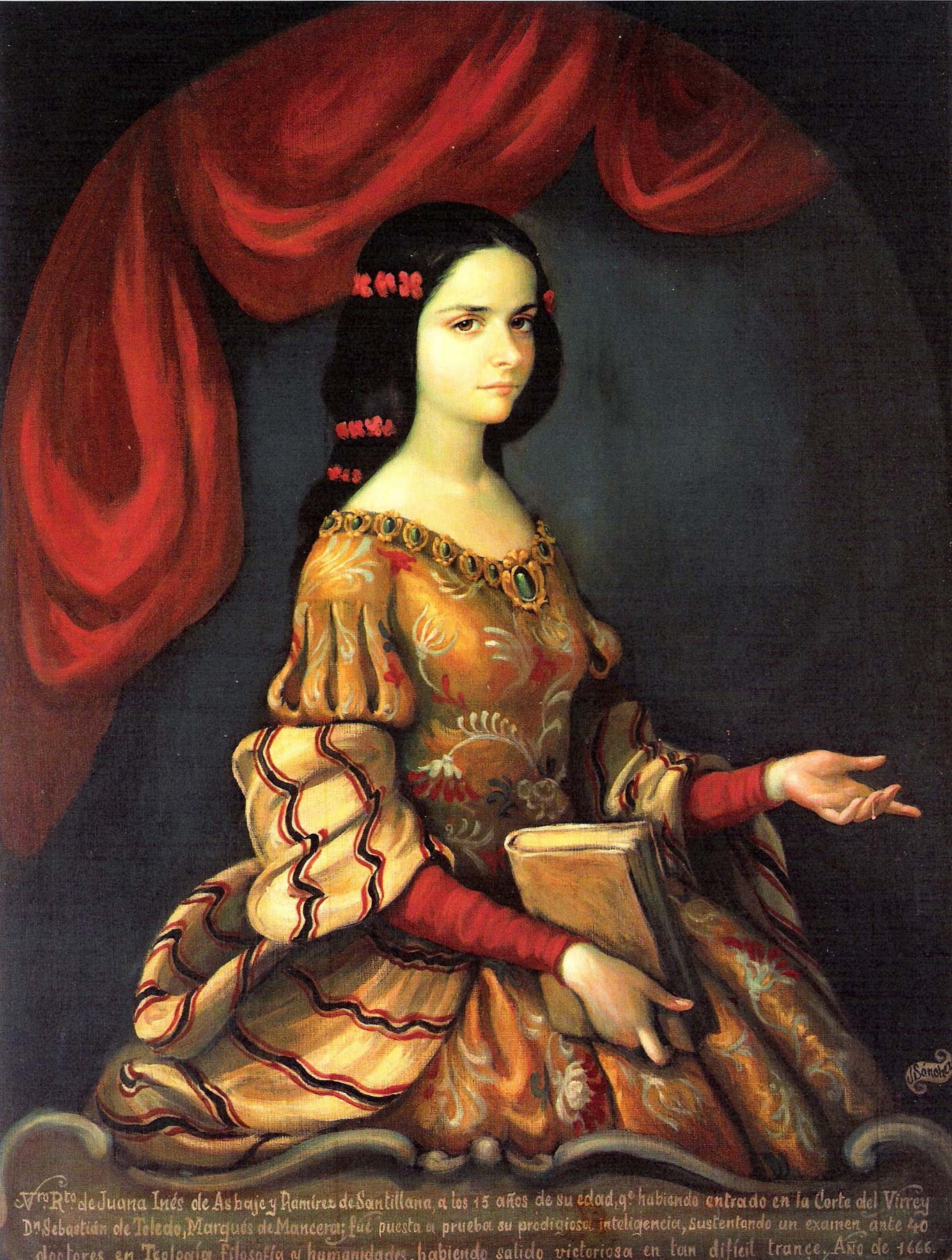 Juana was born in 1648 in San Miguel Nepantla, Mexico, near Mexico City. She was officially registered as “a daughter of the Church” because her parents were unmarried. At the age of three, she followed an older sister to school and convinced a teacher to show her how to read. Juana taught herself all she could by reading her grandfather’s library and soon mastered logic, Latin and the Aztec language Nahuatl. She asked to be allowed to disguise herself as a man so that she could go to university, but was not given permission and had to continue to tutor herself. In a somewhat dramatic teenage display of commitment to her education, Juana cut off her hair every time she made a mistake in Latin.

In her mid-teens, Juana was sent to live with her aunt in Mexico City; by then, rumors of her prodigious intellect had spread to the capital and she was presented at the court of a new viceregal couple, Antonio Sebastian de Toledo (the Marquis de Mancera) and Leonor Carreto. They were so impressed with Juana that they invited theologians, jurists, philosophers and scholars to meet with her and conduct a question-and-answer test of her intellect. Juana surprised everyone with her impressive performance against the scholars and Leonor accepted Juana as a maid-in-waiting in her court. During her time in court, Juana was a bit of an intellectual celebrity and began to write poetry, often for celebratory occasions.

At 20, Juana entered the Convent of the Order of St. Jerome, which was then the only avenue through which she could continue her education (she even turned down several marriage proposals in order to continue focusing on her learning). There, she amassed a library of over 4,000 volumes, wrote poetry, carols and plays that were published and widely read, corresponded with nobles, held intellectual court and taught music and drama. Much of Sor Juana’s poetry is romantic and there is evidence to suggest that she was involved with the Countess de Pareda, one of her many benefactors.

Trouble began for Sor (Sister) Juana once her patronage from nobility waned. In 1690, Sor Juana critiqued a famous sermon given by Antonio de Vieira. The Bishop of Mexico, pretending to be impressed by her, asked Sor Juana to put her critique in writing. Without her knowledge, the Bishop published the critique under the pen name “Sor Filotea de la Cruz” and included a letter condemning her intellectualism as a woman. In a brave act of defiance, Sor Juana responded by publishing her most famous text, “Reply to Sor Filotea.” In it, Sor Juana defended the intellectual rights of women and the rights of women to have access to education, and condemned the Church for helping to keep women uneducated. Sor Juana explained the ways in which she believed education could be used to serve God and recounted her own life-long struggle to pursue education in a society that did not believe women should be learned. For daring to stand up to the patriarchal and misogynist policies of the Church, Sor Juana was officially censured. She was no longer allowed to publish her work, reading her work was prohibited by the Church and she was forced to give away her library of books. She died in the convent in 1695.

﻿﻿In his 1988 book Sor Juana: Or, The Traps of Faith Nobel Prize-winning author Octavio Paz rediscovered and contextualized Sor Juana’s texts for a new generation, since they had been mostly forgotten. Paz praised Sor Juana’s poetry and writings and even declared her a “universal poet.” In 1990, a powerful dramatic film was made about Sor Juana’s life, “I, the Worst of All,” which takes its title from an apology Sor Juana was forced to write to the Chuch. Sor Juana is now featured on Mexico’s 200 peso note and the former site of the Convent of the Order of St. Jerome, Sor Juana’s convent, is now the University of the Cloister of Sor Juana. I wrote a paper about Sor Juana in college and I’m still in awe of her fearless commitment to intellectual rights for women, her refusal to live a typical life and her unending determination to be educated in a time when women didn’t often have the chance to be.