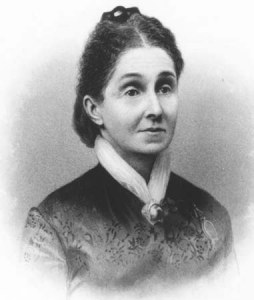 March 29, 1875: The Supreme Court affirmed today that American women are citizens–but ruled that citizenship does not entail the right to vote. Had it been decided differently, the Minor v. Happersett ruling could have spelled victory in the 27-year struggle for woman suffrage.

The 14th Amendment, passed in 1868 to ban states from abridging “the privileges and immunities of citizens of the United States,” struck down state laws that denied citizenship to black Americans. Suffragists hoped that it could also be used to challenge state laws denying women the right to vote–which would seem the most obvious privilege of citizenship.

A test was clearly in order, so on October 15, 1872, Virginia Minor, a co-founder of the Woman’s Suffrage Association of Missouri, went to register to vote for the November Presidential election. Registrar Reese Happersett turned her down solely on account of her sex.

Minor decided that the best and quickest way to universal woman suffrage was to sue. After losing in the trial court, then the Missouri Supreme Court, Minor finally appealed to the U.S. Supreme Court, where her lawyers argued:

There can be no half-way citizenship. Woman, as a citizen of the United States, is entitled to all the benefits of that position, and liable to all its obligations, or to none.

However, in today’s ruling, the Court said that “the Constitution of the United States does not confer the right of suffrage upon any one” and therefore could not confer it on women. There was no doubt that women were both persons and citizens, and always had been. But the Constitution does not define what the privileges of citizenship are. They have to be inferred.

Historically, states had conferred voting rights, with various restrictions, such as age, length of residency, property requirements–and sex. In no state had all citizens had an automatic right to vote, so U.S. citizenship and suffrage have never been identical. Therefore, women and other groups could be denied a right to vote by their states, unless the Constitution specifically said otherwise.

Even in their rejection of the 14th Amendment argument, the justices seemed to show some sympathy for the suffrage movement. Chief Justice Morrison Waite said in the ruling:

Our province is to decide what the law is, not to declare what it should be …  If the law is wrong it ought to be changed … No argument as to woman’s need of suffrage can be considered. We can only act upon her rights as they exist. It is not for us to look at the hardship of withholding. Our duty is at an end if we find it is within the power of a State to withhold.

The battle will go on. Women already vote in the Territories of Wyoming and Utah, and whether national suffrage will be achieved on a state-by-state basis or by a Constitutional amendment, the law IS wrong and WILL be changed.

Epilogue: Virginia Minor (1824-1894) continued to work for suffrage, and testified in its favor before the Senate in 1889. In 1892 she was elected Honorary Vice President of the Interstate Woman Suffrage Convention.

In the same way that the 15th Amendment barred (or at least attempted to bar) the states from using race as a qualification for voting after 1870, the 19th amendment barred sex as a qualification after its ratifaction on August 18, 1920. That took care of voting rights, but left open the broader question of whether the 14th Amendment could strike down gender-biased laws.

Attempts to use it thus were all unsuccessful until 1971, 103 years after its passage, when the Supreme Court ruled in Reed v. Reed that an Idaho law that gave preference to men over women in administering estates was invalid based on the 14th Amendment’s “equal protection” clause. Though this ruling elevated sex bias to an “intermediate scrutiny” standard, the Supreme Court has yet to rule that sexually discriminatory laws should be given the “strictest scrutiny,” so one more amendment to the Constitution is needed to accomplish that: the Equal Rights Amendment. You can support that effort here: