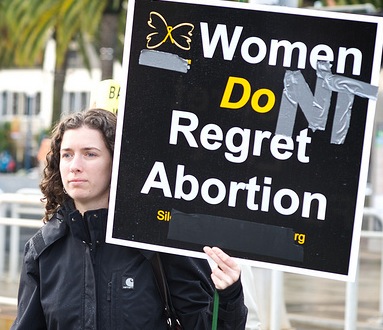 Anti-abortion groups Operation Rescue of Wichita, KS, and the Maryland Coalition for Life have leased an office space directly across a parking lot from an abortion clinic in Germantown, MD, in order to set up a so-called crisis pregnancy center (CPC).

Dr. LeRoy Carhart, who became a prime target of Operation Rescue protests following the murder of abortion provider Dr. George Tiller in 2009, works at the Germantown clinic. Abortion rights supporters are extremely concerned because, although Operation Rescue claims the CPC will “maintain a peaceful First Amendment presence,” a 2010 survey of women’s reproductive-health clinics by the Feminist Majority Foundation found that:

Scott Roeder, the convicted killer of Dr. Tiller, was active with CPCs–a frequent participant in “sidewalk counseling” for the Choices Medical Clinic, the CPC located next door to Tiller’s clinic in Wichita, KS. As Kathryn Joyce wrote in the Fall 2010 issue of Ms. magazine, Roeder testified during his trial that he had gathered information about Tiller’s schedule and habits while “counseling”:

At the same time that Roeder was ‘counseling’ on the sidewalk–trying to talk women out of having abortions–he was beginning to determine if there was a ‘window of opportunity’ that would leave the doctor exposed. He testified that for years he had been mulling over how and where Tiller could be murdered–at the clinic, could the doctor be hit with a car, or shot ‘sniper’ style from a rooftop?

CPCs, of which there are an estimated 2,300 to 4,000 nationwide, use a variety of tactics to deceive women who are considering abortions, as Joyce pointed out, including:

[providing] misinformation about their pregnancy status or due date or suggesting unproven links between abortion and cancer, infertility or suicide. A 2006 congressional report requested by Rep. Henry Waxman (D-Calif.) found that 87 percent of CPCs that receive federal funding provide false information.

Meanwhile, the Maryland Coalition for Life moved its CPC into the new office space on April 2 and has already begun training sessions for volunteers to help “get undecided and post-abortive women” away from Dr. Carhart’s clinic and to the CPC. The pro-choice groups Washington Area Clinic Defense Taskforce and Washington Area Pro-Choice Coalition have been outside the clinic, ready to call the police if they see anything illegal.

But considering the past tragedies, abortion supporters must remain vigilant and insist that law enforcement protect both the legal right to abortion and the safety of abortion providers, their staff and patients.