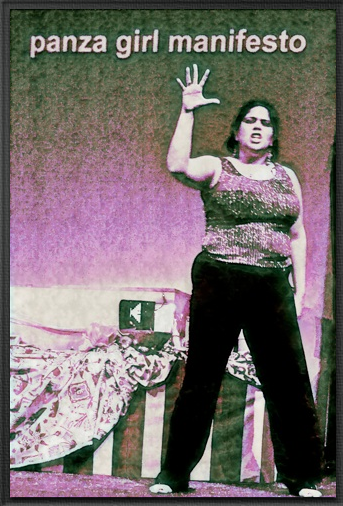 Like The Vagina Monologues, The Panza Monologues is a collection of short performances based on interviews and stories of different women. But instead of being about vaginas, it’s about panzas–Spanish for bellies. The play focuses on the lives of Latina women, putting the panza “front and center as a symbol that reveals the lurking truths about women’s thoughts, lives, loves, abuses, and lived conditions.”

The Panza Monologues premiered in 2003 as a reading at the Mujeres Activas en Letras y Cambios Sociales (MALCS) conference in San Antonio, TX and has since been staged at colleges throughout the Southwest. Cal State Long Beach recently put on a performance benefiting its first annual Chicana Feminisms conference and hopes to make the production an annual event.

From abusive relationships to being panzona to labor organizing, The Panza Monologues explores the connections between our bodies, our culture and politics from a Latina feminist perspective. I asked Virginia Grise (writer and performer) and Irma Mayorga (writer and director) how the play came into being.

Ms. Blog: What was the process of writing and creating The Panza Monologues?

Irma Mayorga: Friends were like, “Yes! Do it, do it, do it!” Vicki and I just decided, “Yeah!” I took all the material that I was gathering and brought that to the table, and at the same time we generated new pieces. We asked other Mexican American women to write things for us–people who we knew were talented, or voices that we knew should be heard. Some women are not writers, and we went and collected their oral histories.

What do you see as the relationship between The Panza Monologues and The Vagina Monologues?

I.M.: We admire The Vagina Monologues, but before we could start talking about vaginas and cho chas and all these things–which are so not Latina to talk about–we have this other thing, which is our bodies, our bellies, our panzas. It’s very cultural: Everybody talks about panza, whether it’s, “Are you pregnant?” or “Are you heavy?” It was just a much more powerful cultural metaphor. Panza can mean the womb, it can mean anything that signifies reproductive organs, anything connected to biological femaleness, so it can touch on things that vagina would, but it’s less sexualized.

[We were] working at a political cultural center that was strongly feminist, and no matter what our political topic was it came back to our bodies. Unfortunately, [while] we were working hard for others, we were very unhealthy for ourselves–the long hours prohibited us from things like going to the gym, and on top of that we worked in a neighborhood that was infested with fast food because it wasn’t part of what we called the richer north part of our city. There’s a way that the geography of the city–which betrays class status–really determined what our food was, even though we knew better. As we were talking about our bodies, it all centered on panza, our bellies, and the fact that every one of us was kind of overweight. It’s also cultural–being Chicanas we were kind of fighting with our culture, too, the culture of rice and beans and starches and beautiful foods that weren’t helping.

V.G.: For us, it really was about our kitchen table stories. What has been interesting is to see how many people connect to them. We were in Dallas at one point doing a local NPR show and someone called in and said, “I just had to call in to say you said panza on the air! It’s wonderful! You said panza and chancla in the same episode!” That was really one of our intentions–to center our own experiences and our neighborhoods and the stories of our own bodies into a piece.

There are aspects of the play that are clearly very political. The piece “Hunger for Justice” is about women organizing after the shutdown of a Levi Strauss factory, and the thread of the relationship among food, politics and bodies runs throughout the monologues. What do you see as the play’s political message?

V.G.: I’m always really interested in questions of colonization, and in the United States the issue of food is completely interrelated to issues of poverty. In San Antonio, access to healthy food is hard. I love in [“Hunger for Justice”] where she says, “We were learning about the systems and in learning about the systems, why not center our body in everything that we do? Because if we can’t take care of our own bodies, then how are we going to do all this work?” Throughout the entire piece there’s definitely a political agenda, and that political agenda is about claiming authority for ourselves. That’s connected to class, race, sex, gender.

I.M.: I think that the play doesn’t try to be political, but it is political. Our play has a nice balance between trying to say we’re going to celebrate our bodies but also critique how these bodies came to be. We [Mexican Americans] are historically situated in the kind of neighborhoods where you don’t have farmers’ markets or grocery stores, even. There’s a piece called “Political Panza” [in which a] woman talks about what her world would look like if we created panza-positive policies. Health is dependent on issues of fair wages, access to food, education, health care.

Recently universities have begun to put on The Panza Monologues as a yearly event with a large cast of women, much like how The Vagina Monologues is typically performed. How do you feel about this new incarnation of the play?

I.M.: The fact that women in colleges seized upon it shows that there’s a hunger for this type of theatre. What I really like is the fact that Latinas who are not theatre majors all of a sudden get the temerity, the audaciousness to do theatre. As Latinas, if you have the privilege of reaching college, it’s like [your parents tell you], “Be a lawyer, mija. Be a doctor, mija. Work in public policy.” But all of a sudden you have these Latinas who may never have had the opportunity to be in theatre get inspired by it. They see something that is articulating how they might think about public policy, or articulating why they want social justice through studying sociology or political science. It asks them to use a different part of their brain; it asks them to be creative. I think that’s the most exciting thing–the fact that they’re finding creative ways to articulate the dilemmas that they are grappling with. 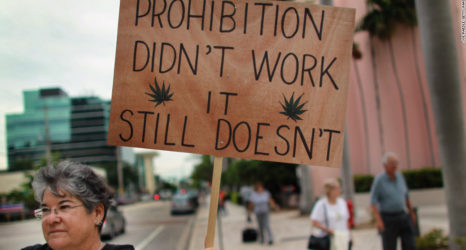 Six Things Feminists Should Know About the War on Drugs