Popular culture continues to frame weddings as THE EVENT of a woman’s life, as in all the shows dedicated to getting married (The Bachelor), to planning a wedding (My Fair Wedding), to brides (Bridezillas). They’re followed in short order by shows dedicated to the NEXT EVENT (no, not the breakup)–the baby, as in A Baby Story, Bringing Home Baby and Baby’s First Day.

One arena in which this marriage-then-baby fever runs particularly rampant is in Stephenie Meyer’s Twilight Saga and its surrounding fandom.

Sure to be rivaled only by Royal Wedding fervor, the Bella Swan/Edward Cullen union will, come November, have the world agog in all things wedding. To whet our appetites, the recently released Breaking Dawn trailer fetishizes the wedding invitation–an aspect of weddings that is of utmost importance, as anyone who’s planned a wedding surely knows. 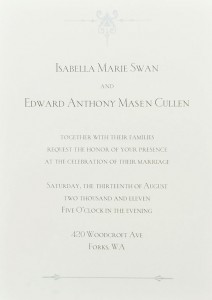 The trailer’s framing of the wedding as “the event that will change everything”  is hardly surprising given the way the wedding/honeymoon/headboard-busting has been framed as THE climax (pun intended) of the Twilight saga. This is one of the many reasons we, as a society, are so seduced by Twilight: It taps into our cultural love affair with weddings and romance big time. In a few short months, this human-vampire union will be writ large on cinematic screens, allowing fans to wed themselves even more deeply to the immortal love story between Bella and Edward.

As documented in books such as White Weddings or in posts about the wedding–industrial–complex, society is in the grip of severe wedding fever–a fever which is, on the one hand, very expensive and promotes our consumer-driven society and, on the other, keeps humans (and women especially) wrapped up in a romance narrative framed by ideas about (white) purity, true love, happily ever after and normative (monogamous, heterosexual) gender/sexuality roles.

This narrative drives a huge part of Twilight’s popularity: Love can last forever and the best kind of love is that between a woman and a man joined in marriage and then creating children. New? Hardly. New for vampire tales? Why yes! And that is a large part of the allure of this saga: taking things that are subversive and sinister (vampires, werewolves, immortality) and wrapping them in a true-love-conquers-all package. Such a perfect depoliticized message for our conformist times.

Rather than promoting questioning of power and privilege hierarchies, a la True Blood, or indicating that women can be strong (and unwed), a la The Vampire Diaries, this vampire saga equates non-attached women with villainy and deifies married mothers, while also steering readers away from overt representations of sex/sexuality. That’s in stark contrast to the other two vampire series noted above.

Though there is pronounced excitement about the pending sex scenes in Breaking Dawn, the recently released trailer seems to be telling viewers, “You should be thinking about the wedding and the marriage, NOT about Edward’s headboard busting!” Though there is a blink-and-you’ll-miss-it headboard crunching image, the trailer drips with WEDDING, not S-E-X. Hence, it delivers the same message as the abstinence paradigm (and Beyonce); If you like it (and wanna do it), you better put a ring on it.

Accordingly, fans have been going gaga over the engagement ring and talk of Bella’s dress. They were perhaps never more twitterpated than when this photo of Bella, post-honeymoon coitus, was released:

Described variously as “hot”, as the best tease ever, or with “OME” (Oh My Edward), the photo captures the morning after, with Bella gripping feathers from the pillows Edward ripped apart (he left her covered in bruises too, which she lovingly (and very problematically) calls “decorations”. But while the images are sexually charged, it’s still in a very safe, vanilla, “they are so in love” type of way.

The fever surrounding the cinematic depiction of the pending Bella/Edward wedding will no doubt rival another union that recently captured the public imagination: Kate and William’s royal nuptials. Like the sexy feminist, I was annoyed with this wedding and its hijacking of our mental desktops. As she asked, “When was the last time you saw the media go ga-ga over a minority union, interracial marriage or gay marriage for that matter?” Uh, never?

It’s not that weddings themselves are bad, but as the sexy feminist puts it so well, it’s that “The global focus on this wedding reinforces the most anti-feminist message around: Get married, ladies, and all your dreams will come true.”

As for whether the Twilight universe could ever accommodate same-sex marriage, as I’ve posted elsewhere, Meyer frames marriage and children as achievements only possible for heterosexuals. Though a fan once asked, “This is not meant to be offensive in ANY way, shape or form, but do gay vampires exist? What if someone changed a human, intending them to be their permanent companion or something and it turned out they were… er… well, gay?,” Meyer skirted the issue of gay relationships, answering “If someone was to bite a gay person, that person would still be who they were before, so they would still be gay.”

This question is, of course, problematic in its presumption that even mentioning the dreaded word “gay” might be offensive, let alone–gasp!!!!–the notion that one of the sparkly Meyer vamps might desire a gay companion. Oh, the horror! It also harkens back to Meyer’s claim that, “When vampires are choosing companions, they are drawn to the most special and beautiful of humans.” Hmmm, since ALL the Twilight vampires “choose” heterosexual mates, are we to surmise this means non-heterosexuals are less special/beautiful? And that there never could be a same-sex wedding gala in the Twilight world, let alone an inter-racial marriage or a wedding wherein the partners were not socio-economically privileged? Yes, I think we are. If we want that type of union, we will have to look towards the looming season of True Blood and feed our more queer vampire passions.

TOP: Invitation to the wedding of Bella Swan/Edward Cullen.

BELOW: Scene from Breaking Dawn