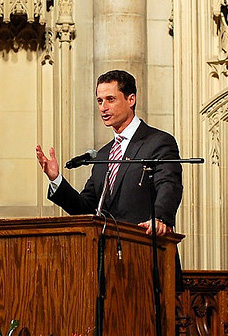 There has been a lot written this week about “Weinergate” after Rep. Anthony Weiner (D-N.Y.), known for his House floor diatribes, admitted Monday to having sexual Internet relationships with at least six women.

A piece by Jodi Jacobsen of RHReality Check, reprinted on the Ms. blog, defends the Congressman on the grounds that while what he did was stupid, he’s not a hypocrite like so many other infamous philanderers who’ve staked their entire political identities on their dedication to family values and moralistic public policy (a la Vitter, Craig, Ensign, Spitzer, et al). In contrast, Ta-Nehisi Coates broke ranks with many liberal bloggers on Thursday to question the harmlessness of Weiner’s actions:

Many of those defending Weiner are describing this as an invasion of privacy, and a lack of basic respect for sexual behavior between two consenting adults.

I think it’s extremely important that what happened between Weiner and Cordova was not consensual sexual activity, but a man sending an unsolicited explicit picture of himself to a woman.

I really don’t see how this qualifies as action between two consenting adults. And the notion that only prudes and people interested in sex-shaming would see it otherwise is deeply problematic.

This weekend, the tide seemed to turn against Weiner as Nancy Pelosi called for his resignation, Weiner checked himself into rehab and police investigated his online conversations with a 17-year-old high school student.

Weinergate prompted The New York Times to ask why women don’t get caught up in sex scandals. The most likely explanation, the NYT decided? Women are more careful because they have to work so much harder than men to get elected, stay elected and earn respect. Surprise!

Moving on from the sex scandal du jour, some less-publicized stories this week that are more deserving of our attention–and outrage.

At The Feminist Wire, Tamura A. Lomax opined on the Black church’s sanctioning of sexual violence by its pastors:

Contemporary Black Church culture, which serves as a significant site of history, community, spirituality, hope and transcendent possibilities for many including myself, creates a context for unchecked phallocentric lordship, which often sanctions rampant sexual violence.

National Geographic brought us “Too Young To Wed,” a devastating essay and photo series on the secret world of child brides, in their own words.

Finally, from ThinkProgress, a reminder that Weiner was not the only male politician whose behavior we ought to be scrutinizing this week: Rep. Ryan Fattman (R-Mass.) said Wednesday that undocumented women who are raped should be afraid to go to the police, while on Tuesday GOP Presidential candidate Rick Santorum called abortion exceptions to protect the health of the mother “phony.” I’d like to see him say that to Rep. Jackie Speier (D-Calif.)