Obama Administration Says Marriage is Between a Woman and a Woman - Ms. Magazine
Skip to content 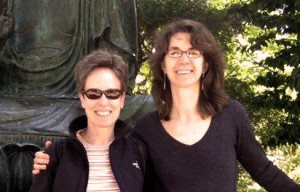 Karen Golinski has a wife. She and Amy Cunninghis have been legally married in the state of California since August of 2008. And now, even the Obama Administration’s Department of Justice (DOJ) has officially recognized the validity of that marriage, emphatically stating that it is unconstitutional for the federal government to deny same-sex couples the rights enjoyed by married heterosexuals.

On Friday, July 1, the DOJ filed a brief (pdf) in response to Golinski v. United States Office of Personnel Management, the case brought by Golinski–a staff attorney with the U.S. Court of Appeals for the Ninth Circuit–against the federal government. Golinski was denied health coverage for her spouse as part of her federal benefits package because Section 3 of the Defense of Marriage Act (DOMA) defines marriage as the exclusive privilege of heterosexual couples. Here’s what it says:

[T]he word ‘marriage’ means only a legal union between one man and one woman as husband and wife, and the word ‘spouse’ refers only to a person of the opposite sex who is husband or wife.

The DOJ brief, however, takes issue with this section of DOMA, saying that it “unconstitutionally discriminates”:

It treats same-sex couples who are legally married under their states’ laws differently than similarly situated opposite-sex couples, denying them the status, recognition and significant federal benefits otherwise available to married persons.

The brief goes on to argue that DOMA violates the due process clause of the Fifth Amendment, which “embodies a fundamental requirement that ‘all persons similarly situated should be treated alike.'” It makes the even more sweeping case that, according to Supreme Court precedent, laws that deny rights to lesbian and gay people must be subjected by the courts to “heightened scrutiny,” a review process meant to “prevent implementation of classifications that are the product of impermissible prejudice or stereotypes.”

Definitions have been at the center of the marriage equality debates. Every constitutional amendment denying marriage rights to same-sex couples rests upon the idea that marriage is, by definition, between a man and a woman. What the Obama administration now makes clear is that the government cannot deny the fundamental right of marriage to same-sex couples on this definitional basis unless the definition serves a legitimate government interest. In the case of same-sex marriage bans, no such interest has been–or can be–established.

According to the brief, when the test of heightened scrutiny is applied, DOMA fails:

[T]he legislative history demonstrates that the statute was motivated in significant part by animus towards gays and lesbians and their intimate and family relationships.

Furthermore, “opposition to homosexuality, though it may reflect deeply held personal religious moral views, is not a legitimate policy objective.” (Ari Ezra Waldman, writing on Towleroad.com in March, explains how heightened scrutiny works in relation to DOMA and gay rights.)

So even if a politician like President Obama, as he has repeatedly and disappointingly made clear, personally believes that marriage is between a man and a woman, the U.S. constitution doesn’t back up him–or anyone else–on that definition. Instead, the Constitution entitles lesbians and gays to the same rights as straight people, and it’s the government’s responsibility to stand up for those rights.

In a startling admission, the brief acknowledges the culpability of the U.S. federal government in oppressing lesbian and gays:

The federal government has played a significant and regrettable role in the history of discrimination against gay and lesbian individuals.

That’s probably the closest we’re going to get to an apology for the injustices of the past. But if this brief is any indication of the direction the federal government is heading, we may be on the brink of a brighter future. Back in February, the Obama administration announced that DOJ would no longer defend DOMA in court; this action puts DOJ on the offense against it.

Lambda Legal staff attorney Tara Borelli, representing Golinski, calls the DOJ brief an “historic shift with enormous significance.” “As more courts adopt this analysis,” she says, “DOMA will fall along with other laws that set lesbian and gay people apart for unequal treatment.”

Karen Golinski now has a wife not just in the state of California, but in the United States of America. That’s what democracy looks like.