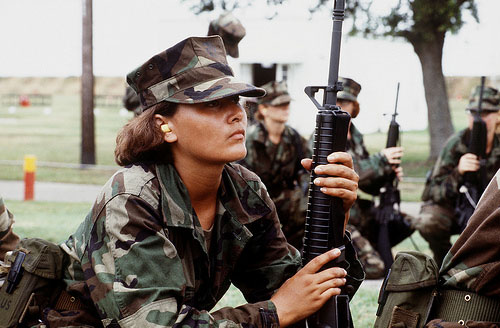 A woman in the military is more likely to be raped by a fellow soldier than killed by enemy fire. One in 5 women who seek veterans’ health care say they experienced sexual trauma during their service.

We’ve known these shocking statistics for years now. Less discussed is the Post-Traumatic Stress Disorder (PTSD) afflicting many veterans who survive sexual violence: A startling study released yesterday found that 80 to 90 percent of New Mexican women veterans with PTSD say the cause was sexual assault, not warfare.

Despite this, victims of sexual violence have faced huge obstacles in securing military disability benefits, once required to submit proof the assault had occurred. But that may now be changing, thanks to yesterday’s revised policy from the Department of Veteran Affairs. After talks with Congresswoman Chellie Pingree (D-Maine), Secretary of Veteran Affairs General Allison Hickey announced that the agency will “ease [its] standards of proof” for sexual assault-related disability benefits.

Previously, a veteran suffering from sexual-assault-induced PTSD had to file an extensive paper trail–criminal reports, eyewitness accounts and medical records–in order to secure disability benefits. This was especially difficult because 4 out of 5 sexual assaults in the military go unreported (in the intensely hierarchical military, soldiers often fear the repercussions of reporting). No report means no immediate medical examination, making it near-impossible to later prove sexual assault.

Pingree introduced a bill in the House of Representatives in March asking the VA to ease barriers for sexual assault victims seeking disability benefits. She went on to hold meetings with Hickey to discuss administrative solutions, prompting the new rule change. On what spurred her advocacy, Pingree said:

I’ve heard the same story from far too many veterans. They were sexually assaulted while serving, but when they tried to get disability benefits it was too hard to prove the attack had occurred. Sometimes victims don’t report the incident because they don’t feel safe…but that shouldn’t be a reason for their benefits to be denied.

The rule change will shift the burden of proof from the victim to the VA office. Instead of requiring criminal reports and eyewitness accounts, VA offices will conduct personal interviews with the claimant, taking signs of mental distress and changes in behavior as proof of PTSD. They may also consider secondary evidence, such as a testimony from a family member or a journal entry about the incident. A claim of PTSD caused by sexual assault can be disproved only by “clear and convincing evidence to the contrary.”

The new rules mark another step in the U.S. government’s slowly improving stances on both sexual assault and trauma among service members. Until last year, the Department of Defense would only recognize PTSD that stemmed from direct enemy combat. Given that women are still technically barred from combat, though many are on the front lines, this meant that until 2010, women were largely excluded from receiving disability benefits.

While government policy is undoubtedly moving forward, there’s a long way to go. Government efforts to prevent sexual assault in the first place and prevent PTSD have been largely ineffective so far, with rates of sexual assault continuing to rise. We’ve known the statistics–yet it seems little has been done.

“I think the military would say they think they’re making progress,” Pingree said to a local NBC affliate. “We have to say, ‘Look, we have to keep pushing on this because you’re not making progress fast enough.'”

Revision: This post has been updated correct the statistic on the number of veterans who have experienced sexual trauma in the military (it is not 1 in 3 women veterans, but 1 in 5 women who seek veterans’ health care.)