Look at This No-Look Pass - Ms. Magazine
Skip to content 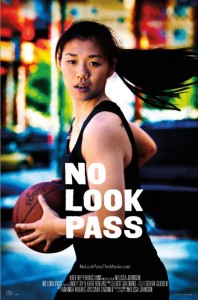 I love a good sports movie, and I love a good basketball (my favorite sport) movie, and what’s best of all is a good basketball movie about a woman player. So I’m very happy to report that the new documentary No Look Pass, which screened this past weekend at Outfest in Los Angeles and will screen again this coming Sunday, is a fine movie about a woman basketball player. What’s more, it’s a heartwarming coming-out tale.

Emily Tay–Etay to her teammates and coach–is a senior point guard for Harvard University as the film begins. She’s a razzle-dazzle player, complete with spin moves, behind-the-back dribbles, an Allen Iverson crossover and, yes, no-look passes. But it’s not just her mad skillz on court that make Etay so intriguing: It’s the fact that she’s made it to a high level of U.S. women’s basketball despite being brought up in a very traditional Burmese family. Can you name any other Burmese-American hoop stars in the U.S.? No, I didn’t think so.

Director Melissa Johnson–a 6-6 former Harvard and European pro-league player herself–and co-editors Sara Sackner and Amanda Hughes show their own mad skillz in paring down 300 hours of film into a 90-minute narrative that takes Tay from Harvard to Germany, where she fulfills her dream of playing pro ball in Europe. Along the way, we get to know her hilarious 6-3 Harvard roommate and best friend Katie Rollins (the yang to Tay’s yin, as the film’s website puts it), who joins her on a small-town German hoops team. And we become privy to how Tay navigates the differences between her  All-American world and her old-school parents, who came to the U.S. with less than $100. Mom is a particular challenge, as she just wants her girl to get a degree and then settle down with a well-to-do Burmese guy. In fact, the parents would be more than happy to help arrange that marriage.

Which certainly won’t do for Tay, who, as she puts it, “likes girls.” Much as she wants to please her parents and repay them for the sacrifices they made for her and her brother, she’s not willing to lead a life without love. During the course of her stay in Germany, she meets a woman, Angela, who she develops a solid relationship with, and that adds even more spice to the film since Angela’s a soldier in the homophobic U.S. military. Bravely enough, Angela was willing to put herself in front of the camera without knowing what the status of Don’t Ask Don’t Tell would be once the film opened. (Read the latest good news on that front here.)

Tay wasn’t out to her parents when the film was shot, either; she’s since come out to her Dad. She still hasn’t told Mom, who hadn’t seen the film as of last weekend. But Mom probably knows anyway.

No Look Pass successfully combines the thrills of a sports movie–it even includes a f-bomb-throwing coach, Kathy Delaney-Smith (who Johnson previously made a short film about)–with nuclear-family drama, a culture clash, a love story and even a rare celebration of female friendship. From a theoretical standpoint, it explores the intersectionality of gender, culture, sexual orientation and class. All in all, if you’re looking for a feminist Hoosiers, this is as close as it gets.