Feminists: Bring Out Your Beards! - Ms. Magazine
Skip to content 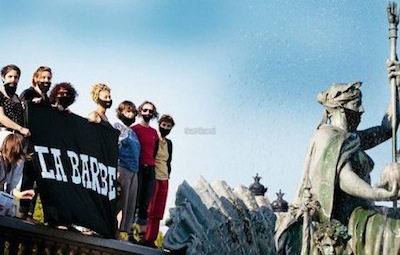 As scores of people lined the streets of Paris yesterday in celebration of Bastille Day, they may have noticed something slightly odd about the statues of women around the city: Many of them–even the famous Marianne de Paris–were wearing beards.

La Barbe, the Paris-based feminist group responsible for these facial-hair installments, has been enlivening French activism since its founding in 2008. Known for its satirical approach to feminist demonstrations (it’s sort of the Gallic version of the Guerilla Girls), La Barbe encourages women to sport beards and crash male-dominated cultural, economic and political events.

Harriet Hirshorn, co-founder of La Barbe, told the Ms. Blog that the group targets statues on Bastille Day to point out the irony of celebrating democracy in a country where women are not, in fact, fairly represented–despite being used as symbolic images of France and Paris.

We climb up on the statues and put beards on them basically to say, ‘This isn’t true, let’s be literal. Why should France be represented by women? That’s ridiculous. France has always been a men’s country for and by men; we should make these statues male.’

Another La Barbe co-founder, Marie de Cenival, said that when the group began in France–a country in which women make up only 18.5 percent of parliament and just 15 percent of executives in large corporations–feminism was in a poor state. The final straw that inspired the establishment of La Barbe was the extreme sexism in the media towards 2007 presidential candidate Ségolène Royal. “La Barbe” is a double-entendre in French, meaning both “beard” and “Enough!”, and the women had decided that they had had “enough” of sexism, not only in the media but, in de Cenival’s words, “everywhere where important decisions have to be taken.”

La Barbe now includes 30-some women, ranging in age from 19 to 80, and has staged more than 75 direct actions. Hirshorn and de Cenival say the group has reignited the conversation about feminism in France, and they attribute its success to its “singular way of attacking sexism”. Hirshorn explained how a typical demonstration works:

First we climb up on the stage wearing beards and [the men] are thinking, ‘What is going on?’ and then we start reading from something that says, ‘Bravo! Look at what a great job you’ve done [keeping women out]! And we start listing their names [to ‘congratulate’ them] … and in the beginning, the men would say, ‘Yes?’, responding to someone calling out their names as if it were roll call. So it was very funny—I think the confusion helps us because by the time they get their bearings again and realize this is a protest, it’s sort of too late and the message has been heard

The women say this infiltration-based form of protest has drawn a lot of attention from the media, and they believe it is waking people up to the realities of sexism in France. de Cenival says:

We go and crash [meetings] wearing our beards, just to give them a mirror to look at themselves–and without saying anything we make it clear that we are among them…[and] are showing that you apparently need to have some hair on your face to be part of this club. Now everybody’s counting the men in the media. … It really had an impact in how the media started talking about feminism again; stopped criticizing it, and started writing papers about the structure of male power in society.

The group’s success has inspired other versions of La Barbe around the world, including chapters in Australia, Norway, Belgium and Switzerland. In Mexico, there’s a group called Las Bigotonas (Women with Mustaches); according to its founder, Guitté Hartog, she and others decided to start it after hearing about La Barbe at a conference in Colombia. Mexico has its own specific challenges with sexism because of the country’s strong Catholic beliefs, which often jeopardize women’s rights. Said Hartog:

The Catholic Church wants to put young women who have abortions in jail; it’s illegal to have an abortion in many places [in Mexico]. When there isn’t strict separation of church and state, women are the first victims of the church’s outdated ideas about human rights.

Hartog added that, unlike La Barbe, Las Bigotonas cannot protest at political events for fear of their lives:

A lot of human rights activists have died, and this has made us very afraid; we don’t want to be next. The government has used the war on drugs to legitimize the use of violence and to kill the activists who demand change and justice. Since police and military are involved in the drug trafficking, feminists seen as turning against the government are more vulnerable to be killed.

However, because of the distinctive form of protest that Las Bigotonas has adopted from La Barbe, the group is more widely accepted than many feminist activists in Mexico:

Because of the humor that we use, Las Bigotonas is seen as less aggressive; it allows us to go to schools and hospitals and to reach people better. It also helps people to see that we are not bitter, that we don’t hate men. Las Bigotonas wants to break those stereotypes.

Back in France, Julia Mouzon, a current member of La Barbe, helped plan many of the Bastille Day actions. She, like Hartog, affirms that humor brings positive attention to their actions:

When you fight something where you are discriminated against, like racism and also sexism, it is harder to have your voice heard as a victim. If you’re in a position where you’re asking for something, people won’t give [it] to you. [So] we don’t ask for anything. We go to places we weren’t invited, we speak in places that we weren’t asked to speak and we ‘congratulate’ the men. We are just trying to make people in the assembly… notice what they did not see before–which is that the organizers forgot to invite the women.

And it’s working. The group started by inviting themselves to events that they knew had very few women, but now they are receiving anonymous invitations from women who feel alone on corporate boards made up almost entirely of men. They have also had women speak out at conferences they crash. Mouzon said:

Two weeks ago we were in a professional assembly with 50 people and they had invited 22 people to speak–and out of the 22 people, there was only one woman. In the morning we did the demonstration, and then in the afternoon the woman took a microphone and said: I know a lot of women who would have been perfect to speak at this assembly and you did not invite them!

Co-founders de Cenival and Hirshorn said that it’s time for America to start a La Barbe movement of its own. “I think when you see [legislators that are] mostly men preparing to vote on something that is essentially a woman’s issue or preparing to vote on anything that affects all of us,” says Hirshorn, “that would be a perfect moment for La Barbe to show up in beards.”